Meghan Markle and Prince Harry have faced significant criticism following their decision to step down as working members of the Royal Family. Royal Rota podcast hosts Chris Ship and Lizzie Robinson discussed comments made by the Duchess of Sussex potentially alluding to this decision. Ms Robinson noted that Meghan may be reaffirming the idea that she stands by hers and Prince Harry’s decision to step away from the Royal Family.

“Meghan said, sometimes making decisions for yourself and your family might not be the most popular ones.

“I think you can read into that that Meghan was potentially talking about hers and Prince Harry’s departure from being working members of the Royal Family.

“She continued when you really know who you are and what your belief system is, and you live by the truth, you can start to peel away the layers of where the fear comes in.” 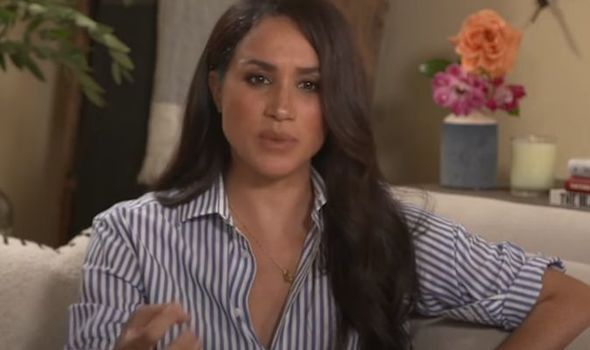 The two royal commentators also reflected on recent criticism both Meghan and Harry have received following their speech on the upcoming US Presidential elections.

“He put out a letter on his Twitter feed of what he wrote to the British Ambassador to demand Harry and Meghan stop interfering in the US election.

“He called it an act of domestic interference by one of our closest allies.”

Mr Ship defended the Sussexes and clarified that in their TIME video they never said to vote for either candidate.

He added that the couple said that American voters should avoid negativity and hate and fundamentally vote.

Ms Robinson agreed but also argued how Meghan’s comments have been viewed by others.

She said said: “Some of their comments have been widely interpreted as supporting Joe Biden over Donald Trump.

“Meghan saying this election is more important than any other in terms of having change.

“People have read into what the pair have said but they never explicitly said who to vote for.

“It feels that although that Tweet sounds very punchy it didn’t actually make much noise.”