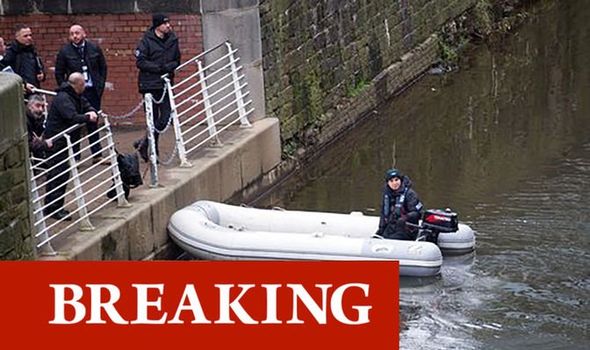 Underwater search teams have been pictured on a boat on the River Irwell in Salford, Greater Manchester, and appeared to have recovered several items. Detectives have also been seen searching undergrowth beside the waterway, which flows west to the end of the Manchester Ship Canal.

A team of firefighters is assisting with the operation.

Charley Gadd, 20, was last seen on Saturday at around 1.15am on CCTV outside the Royal Exchange Theatre in nearby central Manchester.

The University of Essex student had been to a live music venue, Manchester Evening News says.

Divers have been in and out the water all morning.

A Tactical Aid Unit van is parked up near to the river.

The operation is set to continue for most of the day.

Mr Gadd’s worried family, of Colchester, Essex, yesterday urged businesses and residents to search outbuildings and places where he may have found shelter.

The student is described as a being of slight build, about 5ft 9in tall, and was wearing a red jacket and blue jeans.