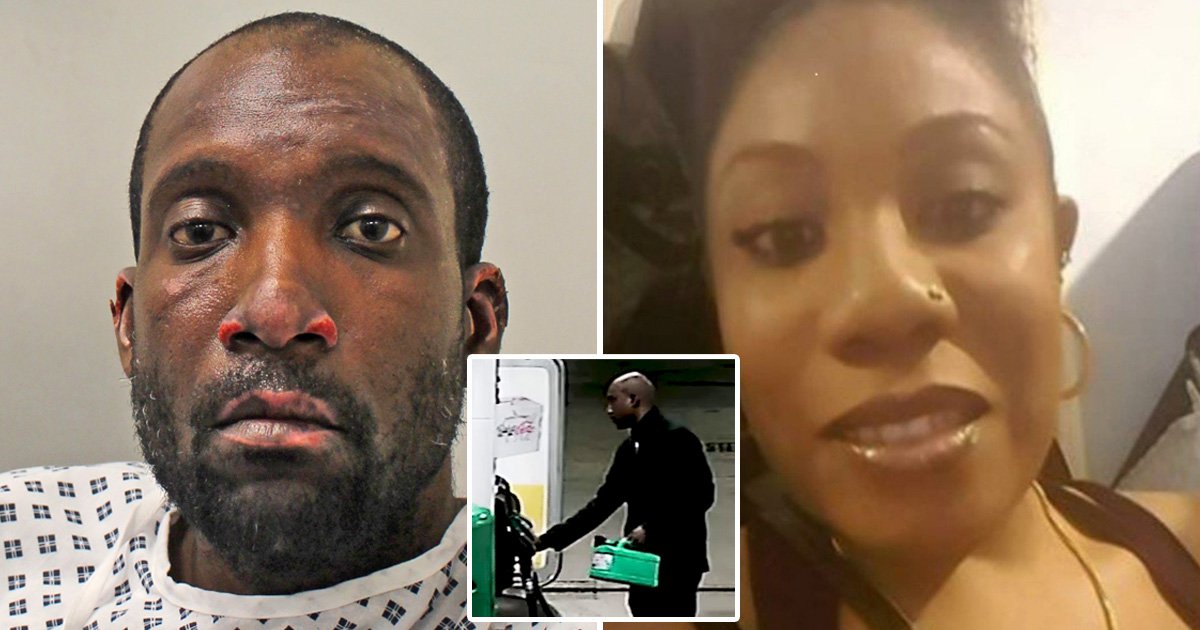 A jealous and controlling man who murdered his estranged wife by setting her on fire has been jailed for life.

Damien Simmons, 45, poured petrol over Denise Keane-Simmons and set her alight at her home in Harlesden, north London, on April 16 last year.

Simmons, of no fixed address in the UK, was sentenced to life in prison, with a minimum term of 32 years, at the Old Bailey today.

Shortly before her death, Simmons had posted a naked picture of his wife on Instagram.

His trial heard that when his phone was examined, police also found images from a camera in a lightbulb set up in the victim’s bedroom.

The  Crown Prosecution Service (CPS) said police attended the house on the night of the murder after Ms Keane-Simmons reported the image having been posted online.

Simmons hid in the front garden as he waited for the officers to leave and then poured some of the petrol in his cannister through the letter box before breaking the front room window and climbing in, the CPS said.

Within just 30 seconds of being inside, a fire had been started, prosecutors added.

During his sentencing hearing, Mrs Keane-Simmons’s family told of the devastation of their loss.

A statement from her aunt Helen Keane was read to the court, which said: ‘Never in our wildest dreams would we expect to be sitting here in court discussing the passing of Denise.

‘Words cannot really express how devastated we are, it is a pain that is indescribable and one that we will never forget.

‘Over the past year and to this very day, Denise’s family and friends are still experiencing the effects of her death. From shock, denial, anger to heartbreak.’

Giving evidence, Simmons admitted having been a ‘controlling’ and ‘jealous’ husband who had harassed his wife after their relationship went ‘downhill’.

His trial heard he had previously set up a voice recorder to catch conversations between Mrs Keane-Simmons and her friend.

At trial, he claimed he had intended to kill himself, saying that after breaking into the property armed with a petrol can his wife had come out of the master bedroom and he did not know she had been set on fire.

Olcay Sapanoglu, from the CPS, said Simmons ‘carried out a jealous campaign of torment and abuse against his wife which culminated in him murdering her in the most horrific of ways – simply because he could not accept that their relationship was over’.

The senior prosecutor added: ‘Simmons claimed that he went to his wife’s home to kill himself so she would have to watch – and that he meant her no harm at all. The jury were able to see through this lie.’

Simmons described during his trial how he met Mrs Keane-Simmons through Facebook after his first wife died in 2014.

She visited him in Trinidad for the first time in February 2018, for the carnival and after they married in 2019, he joined her in London.

Simmons was also given a 20-year jail sentence for arson with intent to endanger life and 12 months behind bars for disclosing sexual images.

The sentences will run concurrently.