President Emmanuel Macron waded into controversy on Wednesday by praising a general who helped win World War I but became a top Nazi collaborator in World War II — comments that triggered outrage among French Jews.

Marshal Philippe Petain will be honored alongside other top military chiefs this Saturday in a ceremony at the Invalides monument, site of Napoleon’s tomb, to mark the centenary of the end of World War I.

Touring battlefields ahead of a formal commemoration of the Nov. 11, 1918, armistice that ended the war, Mr. Macron said Petain was worthy of the honor for his leading role in the World War I victory.

“Marshal Petain was also a great soldier during World War I” even though he made “fatal choices during the Second World War,” Mr. Macron said in the northern town of Charleville-Mezieres.

The stop was part of a six-day tour that included Verdun, which Petain defended against a German onslaught.

Petain led the French army to victory in Verdun in 1916, but gained infamy and a conviction for treason for his actions as leader of Vichy France from 1940 to 1944. He is despised for his complicity in the Holocaust. 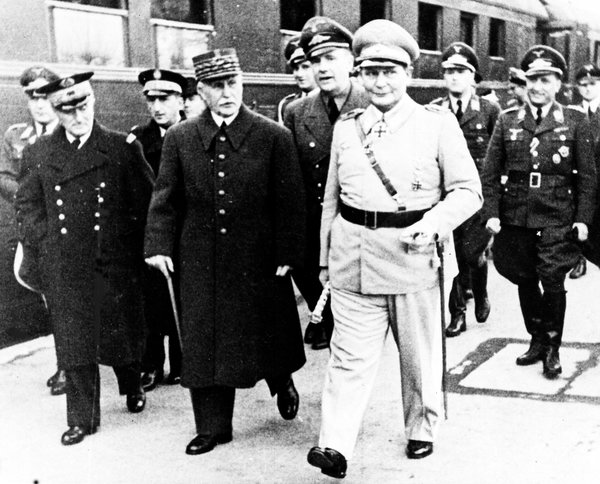 “I pardon nothing, but I erase nothing of our history,” Mr. Macron added.

The 40-year-old French president, sliding in the polls, is gaining a reputation for making awkward or shocking statements. In September, he told an out-of-work gardener that he need only “cross the street” to find a job.

But Wednesday’s remarks struck a chord in a nation that has lived through two world wars and only in recent decades has acknowledged its collaborationist past.

Former President Jacques Chirac admitted in 1995 that Petain’s Vichy government, which collaborated with the Nazis, was the French state. Mr. Chirac spoke at the Vel’ d’Hiv cycling stadium in Paris, known for a 1942 roundup of French Jews that saw 13,000 people deported to Nazi concentration camps, a third of them children.

“I am shocked by this statement by Macron,” said its president, Francis Kalifat. “Petain was the person who allowed the deportation of 76,000 French Jews to death camps.”

Mr. Kalifat said it was “an insult” that a French president could honor Petain on “the same level as the other generals.” But he acknowledged the marshal’s pivotal role in the Great War that earned him the nickname “Lion of Verdun.”

The French government spokesman, Benjamin Griveaux, insisted the issue was a “false controversy.” He quoted Gen. Charles de Gaulle, leader of the Free French forces in World War II and the nation’s universal hero, as saying of Petain in 1966 that “the glory he earned in Verdun can be neither contested nor go unrecognized by the nation.”