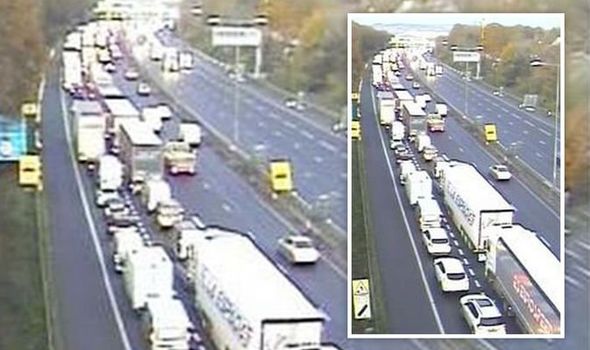 The incident took place on the M25 ant-clockwise between Junction 2 and Junction 1B at around 5am. According to AA News, the incident involved three lorries. An entire stretch of the carriageway in Kent was forced to close during the early hours of the morning.

Highways England has confirmed emergency services from the Police and Fire Service have attended the scene.

There are no reports of any injuries at this stage,

Motorists are advised to expect delays of at least one hour to their journeys.

The road traffic agency has since confirmed the carriageway has reopened with just one lane in operation.

Lanes two, three and four remain closed while a recovery operation is carried out.

In a statement Highways England said: “There has been a collision on the M25 anti-clockwise in Kent which resulted in a full closure of the carriageway.

“The carriageway has now reopened however delays on the approach are currently adding at least 60 minutes to average journey times.

“Lanes 2, 3 and 4 of 4 remain closed at the scene for ongoing recovery.

“Emergency services are in attendance and Highways England has resources deployed to assist.

“Road users are advised to expect disruption and to allow extra journey time.”

This is a developing news story, more to follow