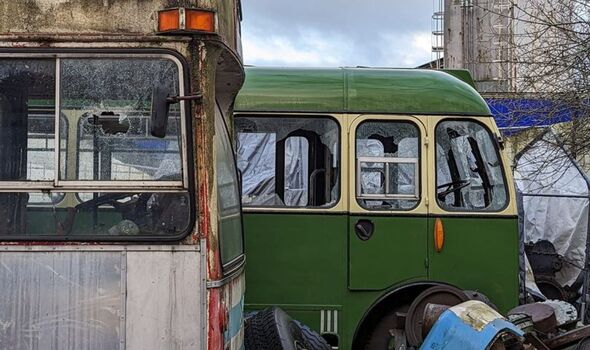 The owner of a company targeted by youths in a “mindless” wrecking spree which destroyed eight lovingly-restored vintage buses has branded the ordeal “soul-destroying”.

The heartless yobs are said to have smashed windows and spray-painted names on the vehicles, most of which are sentimental to the family business.

Additionally, they spray-painted a silver BMW, hopped on its roof, and left a hose running inside.

According to the police, the damage costs around £20,000.

It is thought that six children were involved in the incident at Reliance Bus Works in Chesterton, Newcastle-under-Lyme, on Sunday, January 8, between 3pm and 5pm.

A massive clean-up operation is taking place at the family-run business on Parkhouse Road East following the vandalism.

Reliance director Laura Boote, whose father Martyn Hearson founded the firm, told StokeonTrentLive: “It was just soul destroying. You want to create memories and help these things live on, it’s doing the entire opposite.Total destruction, complete destruction. All that work for nothing.”

Most of the buses are sentimental items.

The company says replacing just the windows will cost more than £20,000.

The wreckage was discovered on Monday when a member of staff arrived for work.

Laura, aged 35, said: “There were six children involved. Two of them came over the fence opposite and the other four came down the road five minutes later. Anything they could find they’ve thrown around. If they could find it and do something to it, they did it.

“If they had taken the batteries or gone to sell it, to feed their family, I’d understand the need behind it but it’s just kids bored or high just wanting something to do. It’s mindless vandalism.”

Laura said forensics officers had visited the site but heavy rain since the attack meant they were not hopeful of uncovering evidence.

But she added the generosity of customers and friends had been overwhelming.

She said: “Customers have come out of the woodwork. They’re saying ‘We’ve got this glass, free of charge, just come and fetch it.’

“It’s an enormous clean-up operation. We’ve had lots of people offering to help. One customer even set up a Gofundme page to help financially.

“I just don’t understand it. When I was a kid and I was bored, there’s no way on God’s Earth I’d think to do something like this.

“If it was me and my child, I’d march them down here and fix the problem. If you’ve done the damage you could help fix what you’ve caused.”

Staffordshire Police have confirmed they are investigating the vandalism.

A spokesman said: “We have launched an investigation after £20,000-worth of damage was caused at a vehicle restoration business in Chesterton.

“Police were called to Reliance Bus Works on Parkhouse Road East at 9.30am on Monday after windows were smashed on eight buses and names had been spray-painted onto them. Some of the buses are vintage models.

“A silver BMW was also extensively damaged. The roof had been jumped on, a hosepipe was left running inside it and it had been spray-painted.

“The damage is believed to have taken place between 3pm and 5pm on Sunday 8 January. It is believed six youths were involved as a result of enquiries so far.”

Click here to donate to the GoFundMe page for Reliance Bus Works.