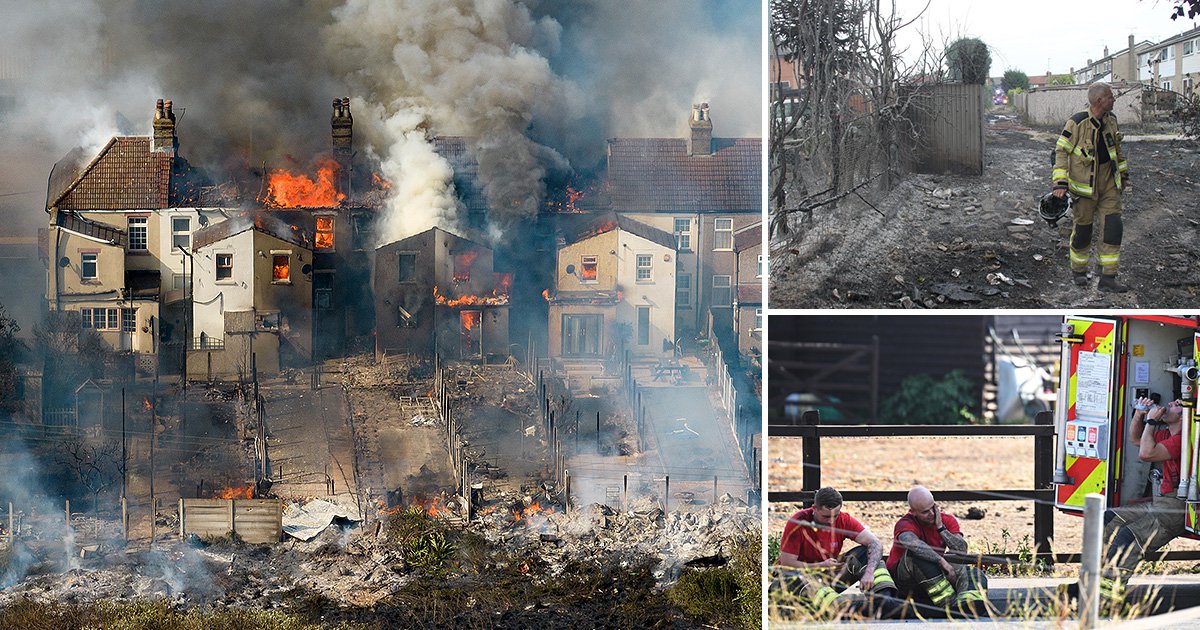 Yesterday has been described as the busiest day for London’s firefighters since World War Two, after devastating wildfires destroyed people’s homes.

He said that on a normal day, the London Fire Brigade receives 350 calls a day, and on a busy day, around 500.

But yesterday the service received more than 2,600 calls – to put yesterday’s chaos into perspective.

Fires in London were so bad and so frequent that the London Fire Brigade declared a ‘major incident’.

As temperatures in the UK passed 40°C for the first time on record, 16 firefighters were injured fighting fires in the capital, two of whom were admitted to hospital.

Speaking to Sky News this morning, Mr Khan said it is ‘important to recognise’ that yesterday’s fires were ‘one of the consequences of climate change’.

He added: ‘The challenge in London is, we’ve got a lot of grass, a lot of green spaces, but a lot of it impinges on properties.

‘When you haven’t had rain for a long period, when the grass is incredibly dry, fires can start very quickly and spread even faster because of wind.

‘The good news is, the fire service today will be providing an excellent service. The first fire engine today will reach you within six minutes, the second engine within eight.

‘Yesterday it was taking 20 minutes because of the pressure the fire service was under.’

‘I think from 8am yesterday we took somewhere in the region of 2,600 emergency calls and responded to over 1,000 fire calls, the vast majority of which were related to the heatwave we were experiencing.

‘The conditions that our firefighters were operating in were unprecedented – operating in 40°C heat, needing to drag significant amount of hose across fields, making sure we were rescuing people where we needed to.

‘We had 16 firefighters suffering from heat-related injuries, two of whom were hospitalised, but I’m pleased to say have now have been released from hospital.’

Mr Smith added that although the weather is now cooler, the ground is ‘still absolutely tinder-box dry’.

He warned people not to have barbecues in parks or discard glass on the ground where it could catch fire if hit by the sun’s rays.