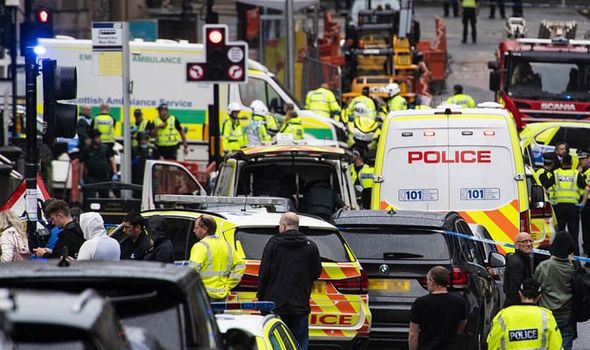 One victim is a policeman aged 42, who it is thought was stabbed in the leg. Witnesses reported that other casualties included a person who had lost an eye. Some of those at the scene also said they had seen up to three bodies, but these reports were not confirmed by police.

The hotel where the attack took place – the Park Inn, in the West George Street area of central Glasgow – is being used to house 91 asylum seekers.

Detectives ruled out terrorism as a motive and said the five injured civilians – who were being treated in hospital last night – were men aged 17, 18, 20, 38 and 53.

The police officer, who has been named as David Whyte was in a “critical but stable” condition after suffering injuries to the neck, abdomen and leg. He is said to be married with children.

Boris Johnson, Priti Patel and Sir Keir Starmer led a wave of revulsion at the stabbings, which came just days after three men were knifed to death in a Reading park in a suspected terrorist attack.

Mr Johnson tweeted yesterday: “Deeply saddened by the terrible incident in Glasgow. My thoughts are with all the victims and their families. Thank you to our brave emergency services who are responding.” Witnesses claimed the attacker was involved in a fight outside the hotel before he made his way inside at around 1.15pm. 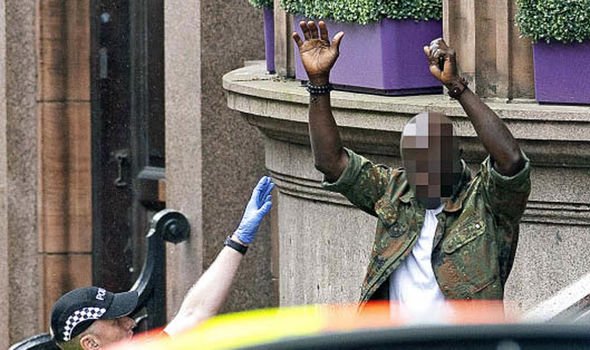 Within two minutes police had arrived.

A hotel resident said he was woken by “terrifying screams” coming from the lobby. He rushed to help but was unable to use the lift as it was covered in blood.

After using the stairs the man, who identified himself as “John”, said he saw two people covered in blood on the floor. A police officer, who was also badly hurt, was lying close by.

“There were two police officers there assisting him.”

A delivery driver who had been bringing food, told how he fought to save the life of a victim he found lying on the floor. He said: “I went into the hotel and a guy had stabbed the receptionist and maintenance guy. He then ran back up to a room.

“I was trying to stem the blood of the maintenance guy when the armed police rushed in and went up to his room and shot the guy. It was absolute carnage.”

Ben Fitzpatrick, 17, who was outside the hotel, said: “I saw someone sitting on a stairwell covered in blood, without an eye.” Nicholas, who is 27 and staying at the hotel, said he heard screaming.

He added: “I heard people say the attacker’s still in the hotel but I didn’t come across him. My mum was still in our room – I told her not to come out.”

Craig Milroy, who saw the aftermath from a nearby office, said: “I saw a man lying on the ground, of African descent, with no shoes on. He was on the ground with someone holding his side – I don’t know if it was a bullet wound, a stab wound, or what it was. 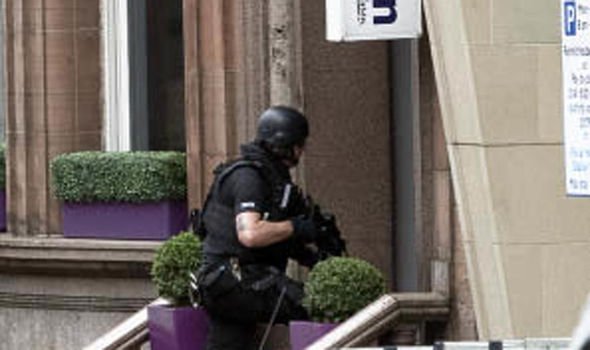 “After that we saw commotion, ambulances further up and we saw armed police all running into the hotel.” Dramatic mobile phone footage shows armed police storming the building and paramedics in hazmat suits treating victims. Another clip shows a male officer lying on the ground after being apparently stabbed in the leg.

In the same piece of film, a different man is sitting on stairs holding his bleeding neck and another is led away in handcuffs.

The Park Inn had been taken over by Government contractor Mears to house the asylum seekers.

In total it has 500 asylum seekers in six hotels, with the properties being managed by Positive Action In Housing. Critics had previously accused Mears of risking the spread of coronavirus by having residents eat in shared dining rooms. 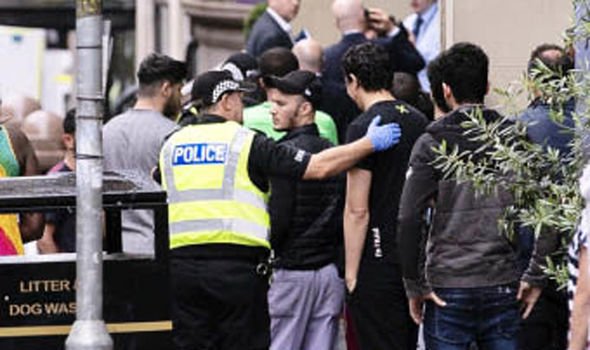 Last night Mears declined to comment on the attack.

Labour leader Sir Keir tweeted: “My thoughts are with all of those who are involved.”

“The injury of a police officer is a reminder of the great bravery our officers show every day as they work to keep us safe.”