Keir Starmer last week announced Shadow Education Secretary Rebecca Long-Bailey had been sacked after sharing a re-tweeting a news article littered with anti-Semitic undertones. Sir Keir pledged in his election manifesto he would seek to “root out” anti-Semitism within the Labour Party. But BBC Today programme host Nick Robinson pointed out the new Labour leader had also made a second pledge he appeared to break with his decision to sack Ms Long-Bailey.

Mr Robinson said: “You chose, in other words, not unity. Because you said it was your first priority, party unity.

“And you’ll know John Lansman, who ran the campaign Momentum, described it as a ‘reckless overreaction’ from someone who promised to end factionalism in the party.”

But Sir Keir dismissed the claim of inconsistency, insisted he wanted to ensure the Labour Party could no longer be associated with anti-Semitic behaviour in the future.

The Labour leader said: “I do want to end factionalism in the party, I do want unity.

JUST IN: Brussels launches extraordinary attack as UK refuses to back down to demands 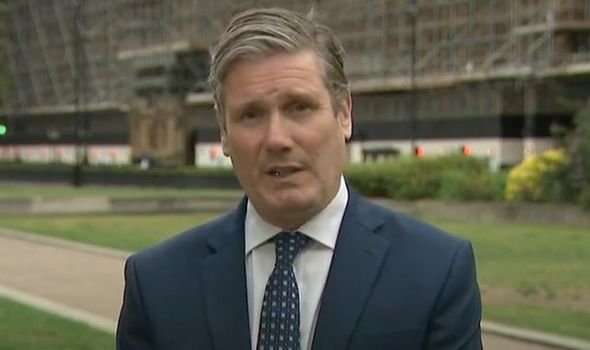 “But unity does not mean I don’t take the action that is necessary on anti-Semitism. And I’m determined to do it.

“I do not want the words Labour Party and anti-Semitism in the same sentence ever again.

“I don’t want any Labour activist or candidate ever knocking on a door in another election and to be met with the response, ‘we used to vote Labour but we don’t anymore because of anti-Semitism’.”