Kate Middleton given standing ovation at sport awards in 2012

Kate spoke with Niaz, one of the finalists of Hold Still, about the portrait she submitted to the photography contest last year. The pair, who share a passion for photography, paid each other compliments as they discussed the photograph.

Asked by the Duchess of Cambridge what made her take part in the contest, Niaz said: “Thank you so much for selecting the photo.

“I was thrilled to take part in it.

“And, you know, you clearly got an amazing interest in photography.

“So yeah, it was really, really…it was inspiring.” 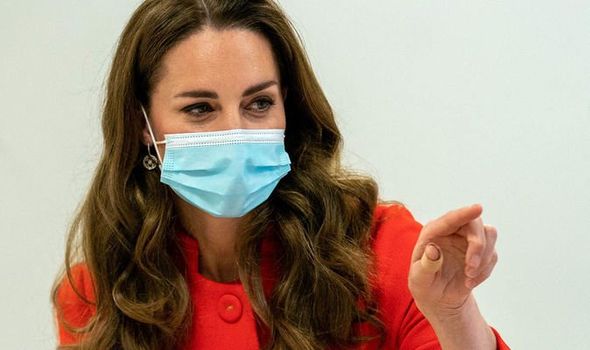 After Niaz recalled what brought her to choose among all the snaps she had taken for the contest the portrait of her daughter, she expressed her shock following the news her work has been chosen by the Hold Still judges.

She said: “I was actually shocked when it got picked.”

“I need to get some tops off you, obviously.”

Niaz, laughing, replied saying: “Not at all, not at all!

“But when I showed it to one of my tutors, I was so nervous I said, ‘It’s actually been picked!’

Niaz, who recently completed her MA in photography from London College of Communication, submitted last year a portrait of her daughter Romy.

The picture, which was taken on Romy’s last day of A-levels, wanted to cast a light on the sacrifices made by young people during the ongoing pandemic and the toll it has taken on them.

Kate, who with Prince William has dedicated much of her royal work to changing the conversation surrounding mental health, spoke to Romy about the impact the pandemic has had on her life and wellbeing.

Speaking to the teenager during the phone call, Kate said: “Romy, hello! I feel i know you so well just by looking at the photograph.”

“I think it’s so important that your mum has really highlighted how much young people have been affected by lockdown and all the disruptions that you had with work and with school and everything.

Romy replied: “It has been quite difficult. I was in my last year year of school, I was doing my A-levels, it’s kind of what the photo relates to.

“And the photo was actually taken on the day that was supposed to be my last day of A-Levels.”

Kate said: “And instead of that probably weird feeling at the end of school, sort of feeling like you can celebrate at the end of your exams and of a period of your life being at school and a new phase of your life, none of you have been able to do that, have you?”

Romy said: “We had a virtual graduation, which was very strange.”

The highlights of the phone call were published at the beginning of Mental Health Awareness Week in a video on the Duke and Duchess of Cambridge’s official YouTube channel, which they launched earlier this month.

Last week, the Cambridges released on their YouTube channel a conversation between Kate, four-year-old Mila and her mum Lynda, who submitted to the photography contest a snap called ‘Shielding Mila’.

During the poignant call, Kate heard why Mila’s family took the difficult decision to split ahead of the first national lockdown to protect the child.

Kate launched the Hold Still contest in May last year in collaboration with the National Portrait Gallery, with the aim to depict life in Britain during the lockdown.

Last week, on the first anniversary of the contest, a book containing Kate’s foreword and the 100 pictures went on sale.