MADRID — Josep Almudéver, the last known survivor of the International Brigades who volunteered to fight in Spain’s Civil War in the hope that they could stop Fascism, died on May 23 in a hospital in Pamiers, in southwestern France. He was 101.

His death was confirmed by his daughter Sonia Almudéver. She did not specify the cause.

Mr. Almudéver was born in France to Spanish parents and held dual citizenship. He was a teenager living in Spain when Francisco Franco and other generals launched a military coup in July 1936 against Spain’s Republican government, which plunged the country into a three-year civil war.

He had to lie about his age to enlist in a Republican militia, but he was soon wounded and sent home. It was also discovered that he had been too young to fight. But after recovering from his injury, he managed to rejoin the conflict as a member of the International Brigades, in which tens of thousands of foreigners had enlisted in order to fight Franco.

Mr. Almudéver was one of many of the Brigades’ left-wing volunteers who viewed the conflict in Spain as a broader fight against the advance of Fascism across Europe, since Franco was also receiving military support from Nazi Germany and Italy.

Giles Tremlett, a British journalist and historian who published a book last year about the Brigades, said that the death of Mr. Almudéver “brings the curtain down on what was a remarkable phenomenon of a transnational volunteer army, whose creation was compared at the time to what had happened during the Crusades.”

Foreigners traveled from all over the world to join the International Brigades, but Mr. Tremlett also noted that the Brigades included Spaniards from the onset of the war, some of whom helped fill a shortfall of specific skills, like doctors or artillery engineers.

Altogether, about 35,000 foreigners served in the Brigades over the course of the war, in a contingent that had as many as 42,000 soldiers at its peak, and whose military organization was in part shaped by Soviet advisers.

Many of the foreigners had to sneak into Spain to fight because their own countries remained neutral during the conflict, including the United States. (The last known American member of the Abraham Lincoln Brigade died in 2016.) 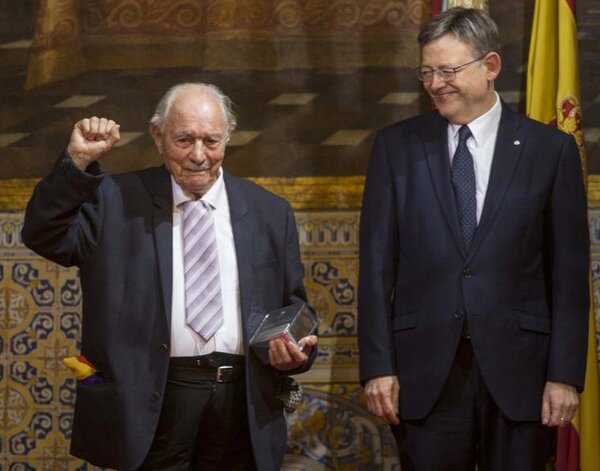 Josep Almudéver Mateu was born on July 30, 1919, in Marseille, France, to parents who came from the eastern Spanish region of Valencia. His father, Vicente Almudéver Mari, was a builder who had moved to France in search of work. His mother, Adela Mateu Paterna, was a homemaker who had been part of her family’s traveling circus in her youth, and who met her husband during one of their circus shows in France.

After living in Marseille, the family briefly moved to Morocco, but then returned to Spain because Mr. Almudéver’s mother fell seriously ill in 1931, just as the Republican government was taking office.

Mr. Almudéver was detained by Franco’s troops in Valencia in 1939, just as Franco was about to win the war, and was held in work camps and prisons until his release in 1942. Determined to continue the struggle against Franco’s new regime, he then joined an underground Communist labor union that was also helping guerrilla fighters in northeastern Spain. In 1947, after some fighters were caught and executed, he fled on foot across the Pyrenees mountains to the French town of Pamiers, where a brother lived. A year later his wife, Carmen Ballester Vicens, managed to join him in France.

Almudena Cros, the president of the Association of Friends of the International Brigades, which was set up in Madrid in the 1980s, said that she was “99 percent sure” that Mr. Almudéver was “the last man standing” and there was no other surviving member of the Brigades.

She said that he had contributed greatly to promoting the historical importance of the Brigades, not least because he remained “so sharp, forceful and clear” when recalling his wartime experience. “He loved whenever he could visit schools and speak to young people about the lesser known aspects of our own Spanish history,” she said.

Pedro Sánchez, Spain’s prime minister, said on Twitter that Mr. Almudéver stood out because of his “political engagement and perseverance,” noting that he had not only fought for democracy and against dictatorship but also then suffered “postwar repression and exile.” Ximo Puig, the regional leader of Valencia, also paid tribute on Twitter to Mr. Almudéver for “fighting for the democratic convictions of all his people.”

Like his father, Mr. Almudéver worked in the construction industry, while devoting much of his spare time to keeping alive the memory of the civil war, his daughter Sonia said. In 2014, Mr. Almudéver published an autobiography, called “The Pact of Nonintervention, Poor Republic.” In 2016, he joined Ms. Cros and her association on a tour of Spain to mark the 80th anniversary of the creation of the Brigades.

In an interview that year with La Marea, a Spanish publication, Mr. Almudéver said that he still had shrapnel in his leg from the wound he suffered during the war. The civil war, he said, was lost because the Republican government was “stabbed” by his own French government and other nations that failed to support the Republicans against Franco.

Mr. Almudéver is survived by one of his three siblings, Vicente, who also fought on the Republican side during the civil war and is now 103. In addition to his daughter Sonia, his other survivors include four more children, 10 grandchildren and six great-grandchildren. His wife died in 2006.