First Lady of America, Dr Jill Biden, along with her husband president Joe Biden are in the UK to pay their final respects to the late Queen Elizabeth II. The last meeting the couple had with Her Majesty was last year at the G7 summit, and shared some touching memories of their final meeting.

According to the First Lady, the couple were told upon entering Windsor Castle not to bring up the topic of family when meeting with Her Majesty as Prince Philip had died just two months earlier. But Dr Biden said that was the very first subject the Queen spoke about.

Speaking to the American news show Today, Dr Biden recalled her encounter with the Queen, saying: “We went up to her living room and they said to us: ‘Don’t talk about family’. So we went up and the first thing she starts with is family!

“Prince Philip had just died recently and she knows Joe and I think she just wanted to talk about her husband.”

The first lady also shared how she “loved” how independent the Queen was, recounting how she and President Biden had been reprimanded when offering to help her pour tea.

Dr Biden claimed the Queen said: “‘No! You sit there and I’ll get the tea’.”

She continued: “She had such curiosity. She wanted to know all about American politics, what was happening. She put us at ease.” 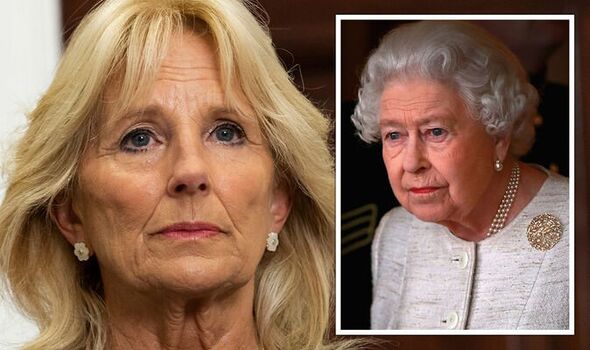 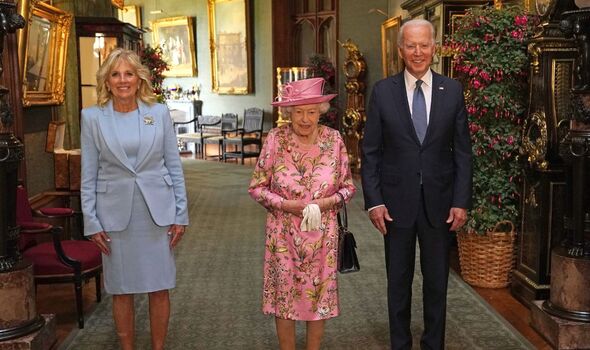 Shortly after news broke of Queen Elizabeth’s death, the Bidens released a statement on the White House website hailing Her Majesty as “more than a monarch”.

They wrote: “Queen Elizabeth II was a stateswoman of unmatched dignity and constancy who deepened the bedrock Alliance between the United Kingdom and the United States. She helped make our relationship special.

“We send our deepest condolences to the Royal Family, who are not only mourning their Queen, but their dear mother, grandmother, and great-grandmother. Her legacy will loom large in the pages of British history, and in the story of our world.”

It noted that the Bidens had first met the Queen decades ago in 1982, when they were travelling as part of the American Senate delegation to the UK, and received the same hospitality in 2021 as they came to the UK as president and first lady for the first time. 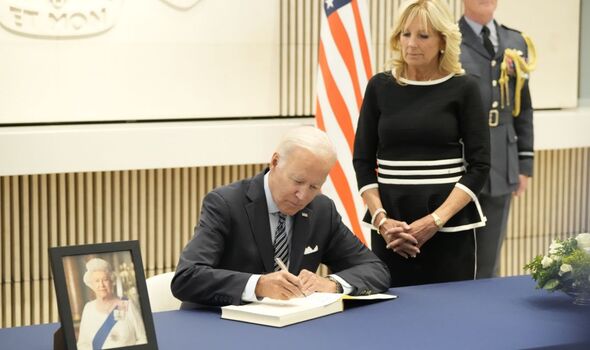 “She helped Americans commemorate both the anniversary of the founding of Jamestown and the bicentennial of our independence. And she stood in solidarity with the United States during our darkest days after 9/11, when she poignantly reminded us that ‘Grief is the price we pay for love’.”

Queen Elizabeth had met 14 of Biden’s predecessors, and reportedly garnered a close relationship with Michelle Obama as her husband, Barrack Obama, was president for eight years.

In her memoir Becoming, Michelle recalled meeting the Queen at a reception in Buckingham Palace in 2009 and how they had bonded over their footwear.

The two had reportedly been wearing heels for hours while standing at the G20 leaders reception, with Michelle writing: “Forget that she sometimes wore a diamond crown and that I’d flown to London on a presidential jet; we were two tired ladies oppressed by our shoes.”

The then-first lady accidentally broke protocol as she laid a supportive hand on the Queen’s shoulder, saying the movement was “instinctive” and didn’t realise until much later the faux pas she had made.

Pictures of that moment were published across the world with headlines reportedly slamming Michelle as “lacking the standard elegance of a First Lady”.

She also claimed the monarch was “okay with it”, writing: “When I touched her, she only pulled closer, resting a gloved hand lightly on the small of my back.”

The author recounted another meeting where the Queen showed a somewhat nonchalant attitude when it came to following royal protocol and pre-planned itineraries. 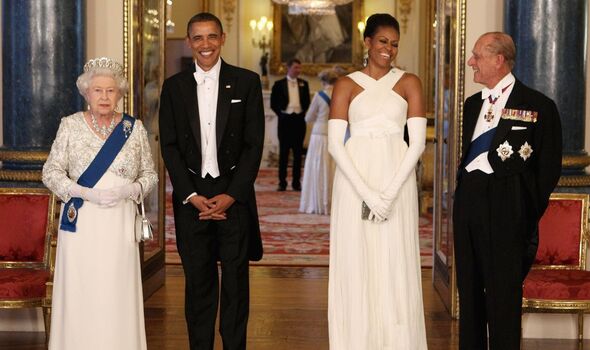 In 2016 the Obamas flew to the UK for one of their last visits with Her Majesty and Prince Philip, with the plan being to fly to Windsor Castle and have the royal couple drive them back to the palace.

The plan was for Prince Philip to drive with Michelle in the passenger seat and Barrack and Queen Elizabeth in the back, but upon landing it seemed Her Majesty was not privy to nor looking to entertain this plan.

Michelle claimed the Queen wanted the first lady to sit beside her in the backseat: “I froze, trying to remember if anyone had prepped me for this scenario, whether it was more polite to go along with it or to insist that Barack take his proper seat by her side.”

Her hesitation reportedly led the Queen to ask: “Did they give you some rule about this? That’s rubbish. Sit wherever you want.”