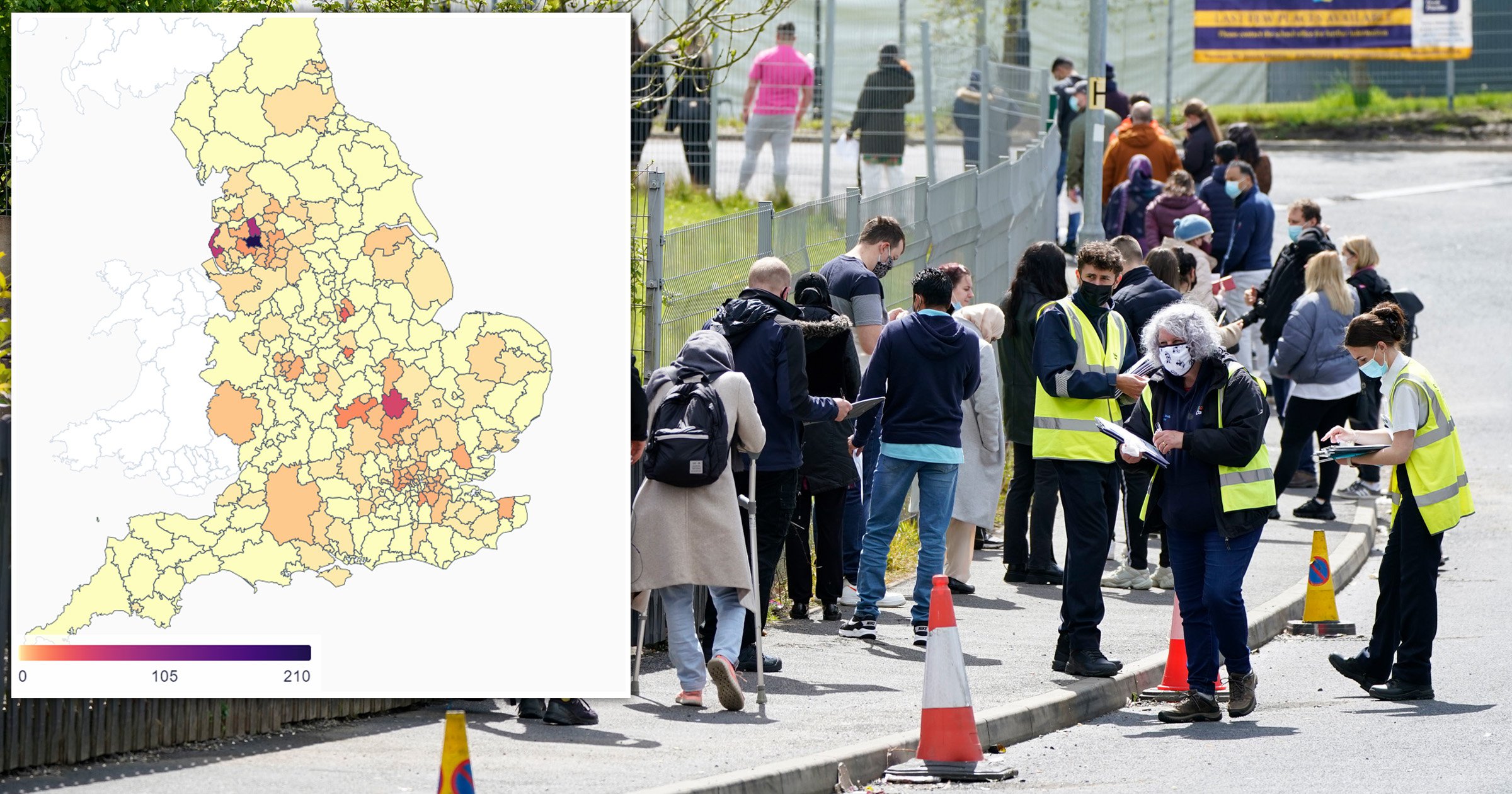 A new variant of coronavirus first identified in India has now been seen in 40% of local authority areas in England, figures show.

The mutated virus, which is more infectious, was found in 127 areas in the weeks leading up to May 8.

First identified in the week ending April 3 in only one local authority, by mid April it had spread to 26 local authorities and by the end of the month it was detected in 92.

In the latest data, it now makes up 19.6% of cases and is rising even as cases of the UK’s currently dominant Kent variant fall.

Its spread has sparked fears that the ‘roadmap’ out of lockdown could be delayed, with restrictions remaining in place after what was meant to be freedom day on June 21.

This is because the B1617.2 variant may spread so fast it could outpace the vaccine roll-out and overwhelm hospitals.

The government has said that it will keep the case figures under close review.

Data from the Wellcome Sanger Institute gives an idea of the spread of the virus. The organisation sequences the genomes of a proportion of positive Covid tests in each area.

While most places still have not recorded a case of the Indian variant, the figures show that the disease is spreading since it was first spotted in April.

In Bolton, it now makes up 81.4% of the cases analysed, while in 22 other local authorities it has also become the dominant strain.

Previously, most cases had been the variant first identified in Kent, which was itself more infectious than the original.

The figures show that even though the Indian variant had been identified in dozens of areas, in many there had only been one or two cases.

In their most recent data, they sequenced 829.5 cases, compared to 331.5 two weeks before.

Health Secretary Matt Hancock said yesterday that there had now been 2,323 confirmed cases of the Indian variant, which is four times the 520 ten days ago.

He said the majority of people admitted to hospital in Bolton with it had been eligible for the jab but had not taken it up.

The 23 areas where the Indian variant is dominating

However, Bedford MP Mohammad Yasin criticised the government for blaming vaccine hesitancy for the spread of the new variant.

The Labour politician said: ‘Vaccine take-up has on the whole been impressive, so I’m not comfortable at all that the government’s response to the Indian variant taking hold is to point the finger at the public when it’s quite obviously their failure to keep our borders safe from new variants that’s the real problem here.

‘The Government were warned about their lax approach to travel corridors and have still not given a reasonable explanation as to why they waited weeks to close down travel to India when infection rates were higher there than in corridors they did close down, like to Pakistan and Bangladesh.

‘We are pleased that the Government has increased surge testing but what we’ve asked for is surge vaccines for (people aged) 16 to 40 and they’re resisting that.’

Boris Johnson has not denied that the government could reintroduce local lockdowns under a tiers system, as was in place last year.

He said the ‘wall of defences’ built up by the vaccination programme meant ‘I don’t see anything conclusive at the moment to say that we need to deviate from the road map’.

But, he added: ‘We’ve got to be cautious and we are keeping everything under very close observation.