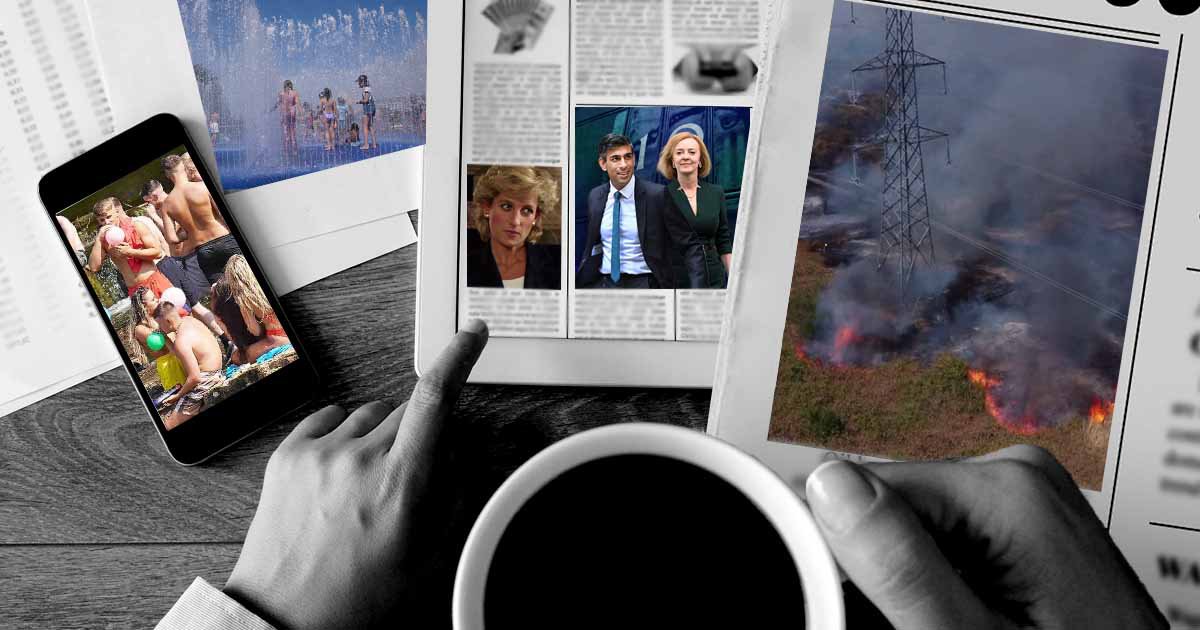 Is that a mirage we see? – No, it’s the shimmering promise of weekend!

It’s been another week of firsts, with record-breaking temperatures (we hope you didn’t melt), devastating wildfires and more political battles.

But to be honest we’re a little tired of living through historical firsts, especially when they are the undeniable signs of climate change linked to global warming.

We don’t blame you for just wanting to enjoy the weather but you have to admit this week was too hot.

The UK is not prepared for temperatures of 40°C, our infrastructure just can’t hack it and such records should be a wake-up call for all of us, especially those in power.

Away from the weather, the Tory party leadership contest to decide who will be Larry the cat’s new housemate has been whittled down to just two hopefuls.

And the BBC has revealed it will pay out ‘substantial damages’ to those who suffered as a result of the tactics used to secure the famous and highly controversial 1995 interview with Princess Diana.

The hottest day ever

There has been a lot of weather talk this week, primarily repeated utterings of ‘gosh it’s hot’ and with good reason.

Soaring temperatures saw the Met Office issue its first ever Level 4 red warning for extreme heat at the beginning of the week.

Temperatures started climbing last weekend, with the UK recorded its hottest ever day on Tuesday.

The mercury reached 40.3°C at Coningsby in Lincolnshire, exceeding the previous record by 1.6°C.

A total of 46 stations across the UK exceeded the previous UK record of 38.7°C, when temperatures exceeded 40°C for the first time.

Records were set overnight too, when Kenley Airfield in Greater London, recorded a new highest minimum temperature of 25.8°C, no wonder no-one could sleep.

Londoners were warned not to travel and whole mainline railways were shutdown, as the heat caused travel chaos.

Flights were suspended at Luton airport after the runway started ‘melting’ and the RAF halted all flights in or out of Brize Norton in Oxfordshire for similar reasons.

The hot weather saw lots of people head to waterways and the beach to try and escape the heat.

Sadly, not everyone came home, with emergency services reporting fatalities after people got into difficulty in the water.

TL:DR: (Louder for the people at the back) Climate change is real and we need to act

The prolonged period of hot weather has turned green spaces brown and created the perfect conditions for wildfires – with devastating effect.

Major fire incidents were declared in London, Norfolk, Suffolk, Lincolnshire, Leicestershire and South Yorkshire when bone-dry fields and woodland went up in flames.

London Fire Brigade experienced its busiest day since the Second World War on Tuesday with more than 2,600 calls to incidents across the day.

Fortunately there were no deaths but more than 40 homes and businesses were destroyed by grass fires which tore through residential areas.

Whole rows of houses were burned to the ground, a cul-de-sac was left looking like post-apocalyptic film set in Dagenham and people lost everything in Wennington.

Barnsley endured one of the worst fires, where six houses on Woodland Drive were engulfed after a blaze broke out in a back garden.

Locals battled the flames with hosepipes for 45 minutes until crews arrived in a desperate attempt to stop it from spreading to more homes.

Elsewhere in South Yorkshire, there was a serious fire in the village of Clayton, while there were 280 fires in Norfolk alone on Tuesday.

TL:DR: Weeks of dry weather have turned Britain into a tinderbox

Eight become two in the race to Number 10

After eight hopefuls threw their names into the hat to replace Boris Johnson in number 10, just two candidates remain standing.

On Wednesday, we learned the new prime minister will either be Rishi Sunak or Liz Truss.

The pair made it two the final two after Conservative MPs voted out Penny Mordaunt in the final ballot.

Sunak comfortably won the contest with 137 votes, followed by Truss on 113 with Mordaunt being eliminated on 105.

The trio were fighting for the votes of former equalities minister Kemi Badenoch, who was knocked out with 59 votes on Tuesday.

Accurately predicting who will win is tricky but bookmakers currently put Truss as the favourite.

The role of deciding who will replace Mr Johnson in Number 10 and who will lead the country now falls to members of the Conservative party.

The number of people making the important decision, which will impact millions, is surprisingly unclear but we do know they’re not very representative of the country as a whole.

Tory party members are mainly men, 40% of them are over the age of 65, a whopping 95% identify as white British and the vast majority are in better off and in higher-salaried jobs.

They are also twice as likely to live in the south of England compared with the population of Britain as a whole.

We won’t know who has won the contest until September, so until then strap yourselves in for lots of campaigning and hopefully more moments like this.

TL:DR: Our new prime minister will either be Rishi Sunak or Liz Truss

The famous and highly controversial 1995 BBC Panorama interview with Princess Diana was back in the news this week when the broadcaster issued an update on the matter.

The tell-all interview with Martin Bashir saw the royal, open up about her marriage to Prince Charles, famously saying: ‘Well, there were three of us in this marriage, so it was a bit crowded.’

Last year the Dyson Report concluded the interview was secured by ‘deceitful behaviour’ and was a ‘serious breach’ of the broadcaster’s guidelines.

Now, the broadcaster has revealed it has been working with those ‘who suffered as a result of the deceitful tactics used by the BBC in pursuit of its interview with Diana’.

This includes paying out ‘substantial damages’ to Prince Harry and William’s then royal nanny and promising to never broadcast the interview again or license it to other broadcasters.

TL:DR: The BBC is still trying to make amends for the 1995 Princess Diana interview

And last but not least, a pun and some naked protesting

The news can get a bit bleak so we like to send you off with a lighter note here at Metro.co.uk, so here’s one to make you smile.

Jill White, from Tatworth, has finally won her battle to get her local council to cut an overgrown hedge – by posing naked.

For two years Jill has been trying to get Somerset County Council to fix the foliage next to the busy A358.

She wanted the plants trimmed because the overgrowth meant her daughter, who uses a wheelchair, struggled to access the pavement.

Sick of requesting the bush be trimmed over and over again, Jill decided to take drastic action.

She stood on the A358 with placards, and not much else, proclaiming: ‘I’ve trimmed my bush, now Highways trim yours.’

And it worked! Following the protest, county councillors confirmed work to cut the hedge and clear the footpaths would get underway.