Home » Europe » How other countries in Europe held their exams

How other countries in Europe held their exams

Like many European countries, Britain cancelled student exams due to the coronavirus pandemic.

To calculate results, teachers were asked to submit the grades they thought each student would have achieved to exam boards and to rank their pupils in order. Data points for each student were then put through a statistical model, including the school’s previous performance.

But many students claim their prospects were ruined and university offers missed due to an “unfair” algorithm that put pupils at some private schools at an advantage.

As the government now deals with the fallout, here is how other countries in Europe have tackled the issue:

German schools were among the few to go ahead with the usual exams during the pandemic.

All 16 states decided unanimously that the Abitur tests, which are needed to secure a university place, could still take place despite schools being closed until Easter.

Some students had protested over health concerns and the added pressure of studying in the middle of a global health crisis, but it was decided the tests would go ahead in May.

Students took the test in school gyms and spaces where they could be kept at a suitable distance. 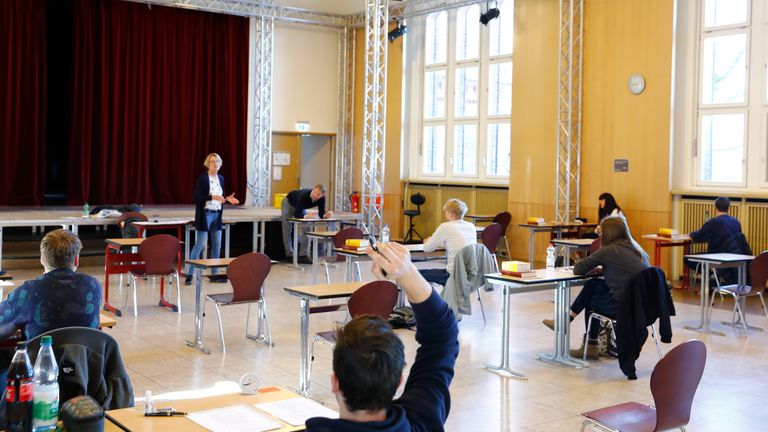 Students in Italy did not have to take written tests but instead underwent hour-long oral exams.

Italian schools have been closed since 5 March as the country was hit by a rapid increase in coronavirus infections, spurring a national lockdown.

Classes are not expected to start up again until October, but the Italian government decided classrooms could be used for high school students to take their final oral exams in person.

Students had five oral exams a day with one hour allotted for each and a 15-minute break between each one so the area could be sanitised.

On 3 April, French authorities announced the school-leaving baccalaureate exams would not go ahead for the first time in history.

Instead, students were awarded an average grade for each subject based on their performance in the first two terms. The pass rate was more than 95% – an increase of seven percentage points on last year – and universities were forced to create an extra 10,000 places for September in the most popular subject areas.

Students in the Netherlands were assessed on the results of their school exams, which secondary schools conduct themselves.

They did not have to take their final central exams and were also allowed to retake failed exams.

As a result, schools saw a surge in the number of final-year students passing their diplomas.

A third of secondary schools reported that all of their pupils had graduated – about five times more than in previous years – according to a survey of 350 schools by newspaper AD.

A government spokesperson told the newspaper that the better results were because students had more time to study while their central exams were cancelled.

Those taking Spain’s university entrance exam, the selectividad, were allowed to choose three out of five questions and were not asked about anything studied since the lockdown began. The country’s overall pass rate was within one percentage point of last year’s results, apart from in Catalonia, where a much larger percentage of pupils achieved the top scores.

Austrian schools went ahead with final exams due to the country’s relatively low infection rate.

Students took part in a mandatory written exam, while some also took an optional oral test.

Both grades from the exams and the grades obtained during the school year contributed to the final result.

In a similar approach to Austria, Hungary cancelled its oral test but carried out written exams.

No more than 10 students were allowed to be in an exam room and they had to maintain a 1.5m distance.