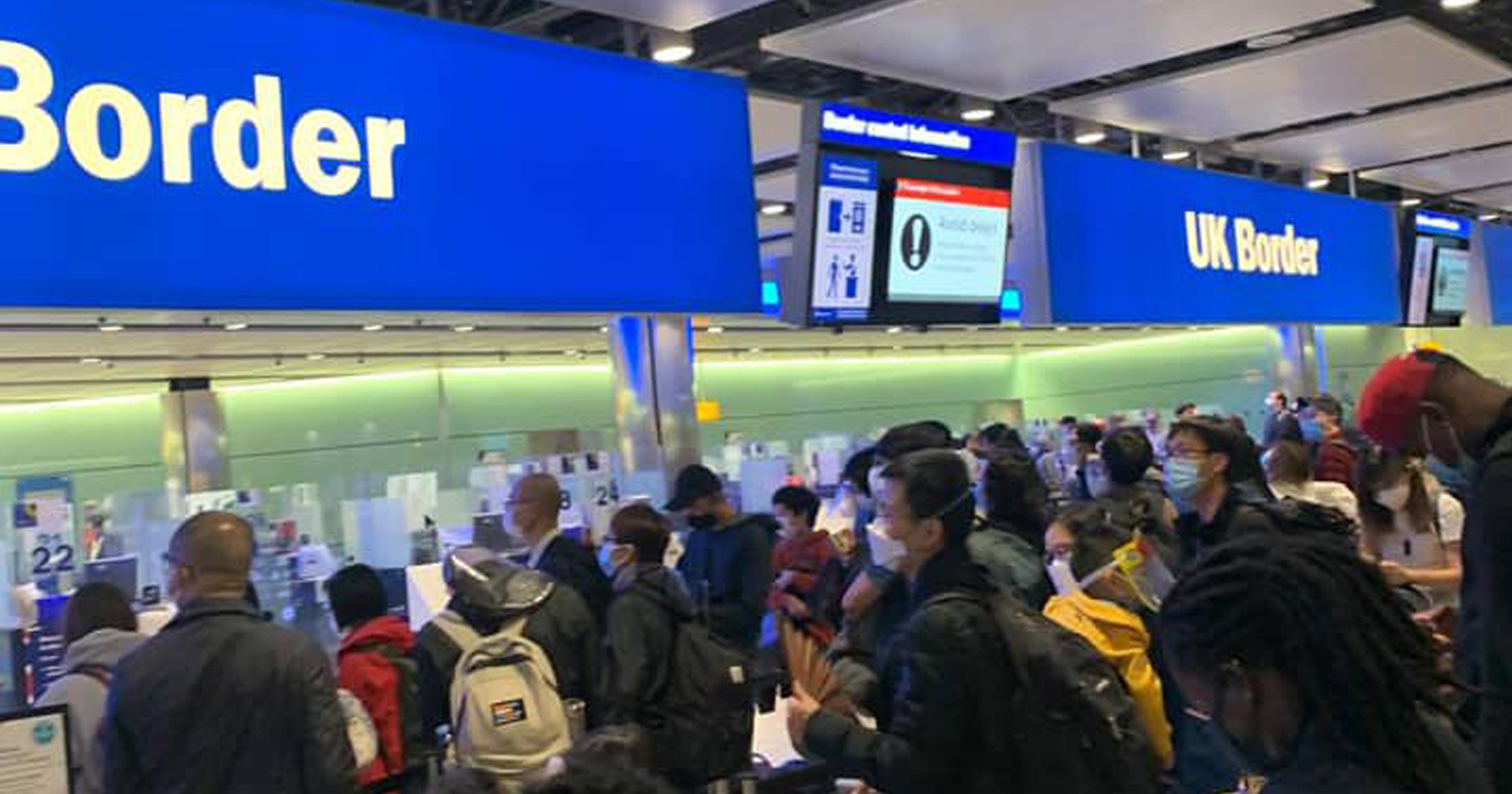 Passengers arriving at Heathrow have described an ‘appalling’ lack of social distancing and mixing between red and amber list passengers.

One traveller from the US captured the scene as she passed through Border Force checks, which she said took more than an hour and a half.

Her daughter was ‘shocked’ at seeing the picture taken by her mother, who landed at 6.27am on Sunday on a flight from New York.

Yulia South said: ‘My mother was appalled. She had spent quite a long time in New York where she and most other people were quite careful to keep their distances from others and to wear masks.

‘When she landed at Heathrow the hall was packed and there was another flight from the States, from Chicago, going through as well.

‘For over half an hour there was only one window with a border security official for two flights.

‘It was like sardines, she didn’t feel safe to say the least.

‘Things started moving a bit when they opened another three windows but she spent over an hour and a half cooped up in there. I was shocked when she sent me the picture. An airport should know what flights are coming in and how many staff are needed.’

Yulia’s 56-year-old mother, who did not want to be named, was held up at Terminal 2 after disembarking the Delta Air Lines flight, operated by Virgin Atlantic, and is now quarantining in Hertfordshire.

The family live on both sides of the Atlantic and in Russia, and the experience has led them to cancel plans they had to meet up after the UK Government’s scheduled roadmap out of lockdown.

The US is on the amber list, meaning passengers must take a Covid test before travelling and quarantine for 10 days on arrival.

Yulia, 36, from Hertfordshire, said: ‘We have made sacrifices as a family, being very careful to follow Covid precautions so for my mother to experience this when she lands is disappointing.

‘She was in the hall for over an hour and a half with hundreds of other people. Even with all the necessary precautions she took, such as wearing a mask, it’s still worrying.

‘We had planned to travel again when it is safe to do so for important family occasions, such as the birth of my brother’s first child, but after my mother’s experience we are going to wait until next year when hopefully things have calmed down.’

Another passenger described a ‘complete mess’ as he landed in Terminal 5 on a British Airways flight from Alicante and said he found travellers from red and amber list countries mixing at various points at the airport.

Kevin Gibbons, 39, who works between the UK and Spain, arrived at 1.35pm on Sunday at around the same time as two flights from India.

‘I was in complete shock,’ he said.

‘I entered the passport control area and about ten metres in you are greeted by a sign directing you to the correct entry zone, but before you enter the zone you are still mixing in the hallways as you disembark the planes.

‘Then once through passport control you have a red lane that looks very strict but when you enter the baggage collection area you are all mixing.

‘It’s a complete mess and I feel sorry for all the airport staff.

‘None of the Indian flight passengers were social distancing, although they were wearing British Airways-issued face screens.

‘Once I had my bags I entered customs and explained to an officer that I was disappointed that I was mixing with people from a red list country and I felt it was a complete mess, he said it was not his problem.’

The complaints come as Heathrow prepares to open up a new terminal dedicated specifically for red list passengers, who have to quarantine for 10 days in a managed hotel.

Speaking to Metro.co.uk last week, a spokesperson said: ‘Red list routes will likely be a feature of UK travel for the foreseeable future as countries vaccinate their populations at different rates.

‘We’re adapting Heathrow to this longer-term reality by initially opening a dedicated arrivals facility in Terminal 3 from June 1 for red list passengers arriving on direct flights.

‘We will move this facility to Terminal 4 as soon as operationally possible.

‘While opening this facility will be logistically very challenging, our hope is that it will enable Border Force to carry out its duties more efficiently as passenger volumes increase in line with the green list. Until then, the current red list system will remain in place.

‘This system has been designed by the Government and has several layers of protection to keep passengers and colleagues safe – including mandatory negative COVID tests for all international arrivals, mandatory use of face coverings, social distancing, segregation and enhanced cleaning regimes and ventilation in immigration halls.’

France and Germany have tightened entry requirements in a move to prevent the spread of the Indian Covid variant.

Those crossing the English Channel who are not EU citizens must now have essential reasons for travelling, present a negative Covid test before leaving, take a PCR check within 48 hours of arrival and self-isolate for seven days.

Metro.co.uk has approached the airport for comment about the passengers’ specific concerns as well as the Home Office, which uses Border Force to carry out passport control checks.