Home » Europe » Harry Dunn death: Sacoolas was on the wrong side on the road for 20 seconds before hitting motorcyclist

Harry Dunn death: Sacoolas was on the wrong side on the road for 20 seconds before hitting motorcyclist

The American woman accused of killing Harry Dunn has admitted driving on the wrong side of the road for “approximately 20 seconds” before colliding with the young motorcyclist.

A statement released by Anne Sacoolas’s lawyers said she is “devastated” and “continues to grieve deeply” for Harry’s family.

Ms Sacoolas was charged with causing the death of 19-year-old Harry by dangerous driving after a collision outside RAF Croughton in Northamptonshire in August last year.

The wife of an American intelligence worker, Sacoolas, 43, claimed diplomatic immunity shortly afterwards and was able to return to the US, sparking a campaign by Harry’s parents to have her brought back to the UK to face justice.

The statement said she “did everything she could to assist Harry” after the collision.

It went on: “Anne is devastated by this tragic accident and continues to grieve deeply for Harry’s family.

“The mischaracterisations of what happened on that tragic day are harmful to all involved. Anne did everything she could to assist Harry.”

Sacoolas and her family had only been in the UK for three weeks when the collision took place on 27 August, her lawyers said.

She had made a left turn and “instinctively” driven on the “wrong side of the road for approximately 20 seconds” before the fatal crash, they said, adding that she had been “otherwise driving cautiously and below the speed limit”.

According to her lawyers, she could not see Mr Dunn due to “the crest of a small hill”.

“After the accident, she ran from her car and tried to help him. Anne then saw another motorist approach and flagged her down for more support.

“The other motorist immediately called for the emergency services and Anne made calls to alert the police from the nearby air force base.

“The base police arrived quickly and assisted Harry. Tragically, it took over 40 minutes for the ambulance to arrive and nearly two hours passed before Harry was admitted to the hospital.

“Anne did not leave the scene until she was instructed to do so by the UK authorities.” 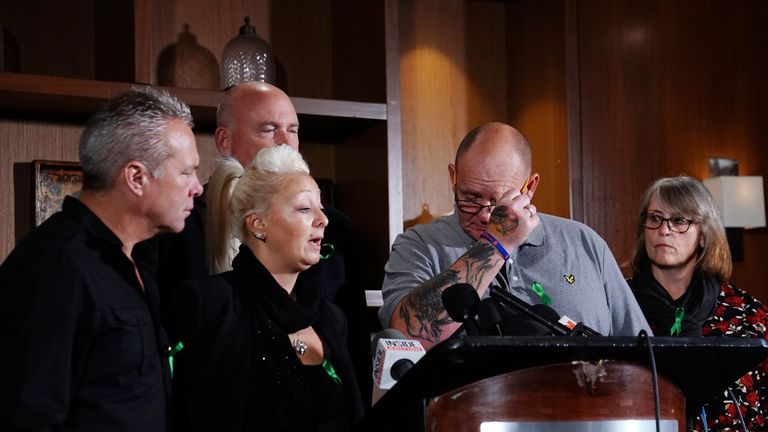 US authorities asserted that Sacoolas had diplomatic immunity and, according to her lawyers, “determined that it would be difficult for her and her family to remain in the small Croughton community”.

Her lawyers said she returned to the US on a commercial flight after the US Embassy “informed the Foreign Office of this decision and instructed Anne to return home”.

Radd Seiger, spokesman for Harry’s parents, said they had “noted” the statement.

He added: “Their position is that these issues should not be aired in any form other than a court of law.

“Once again, they invite her to do the right thing and return to the UK to answer to the charges laid against her.”

Earlier this week, there were reports that Mrs Sacoolas was willing to consider taking part in a virtual trial in the UK.

On Thursday night her lawyers said: “We have been and remain willing to discuss a resolution, including the possibility of virtual proceedings, with the UK authorities.

“Anne has never tried to avoid being held accountable for the tragic accident and she would like nothing more than to find a path forward and to provide the family some measure of peace.”

Sacoolas had “fully cooperated with the investigation”, the statement said, adding that she had met police at her home the day after the collision and had voluntarily been interviewed several weeks later.

Delays on busy motorway as police search for missing man, 58