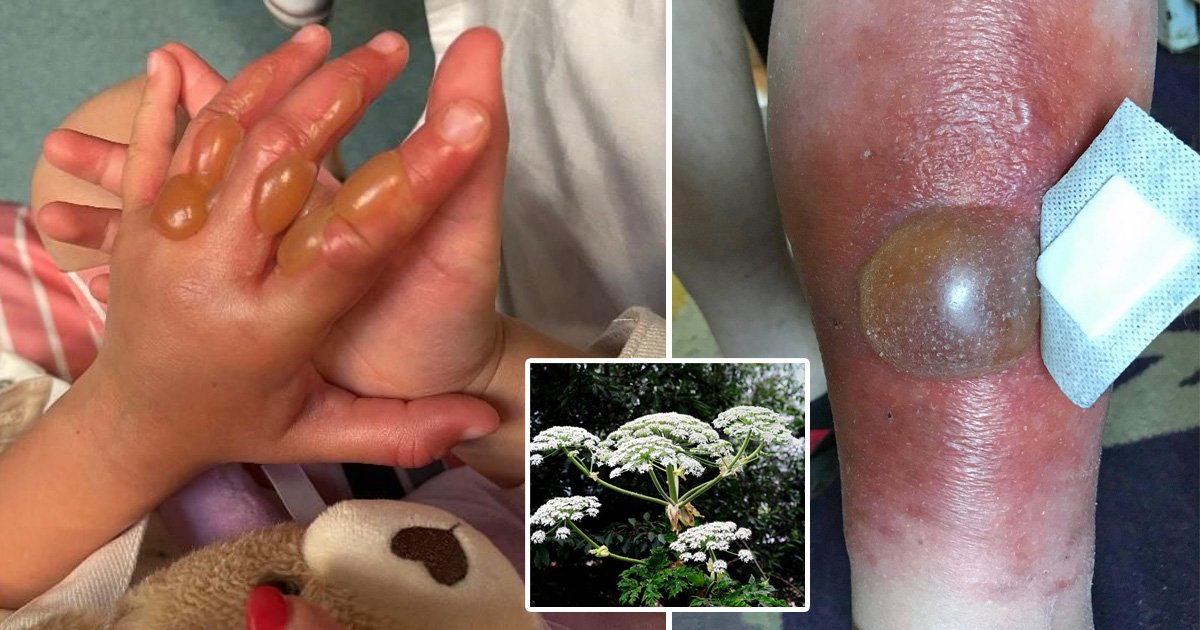 Horrendous pictures show the consequences some may face after coming into contact with the UK’s ‘most dangerous plant’ – as victims warn Brits to avoid it at all costs.

A primary school girl had horrendous second-degree burns after touching the tall, cow parsley-like plant while playing in Longsight Park in Bolton.

She was admitted to hospital, with alarming images showing the severe blistering she developed.

In an urgent warning following the incident, Hardy Mill Primary School told parents to show their children what the plant looks like in order for them to avoid it.

The girl is not the only recently injured child – with a 22-month-old left in ‘agony’ after a brush with the toxic weed earlier in June.

A dad has also spoken out after being left unable to walk and feeling like he was ‘on fire’ following exposure.

Nick Sherratt, 53, was only in contact with giant hogweed ‘for 30 seconds’ when he slipped off a footpath near Porthjoke Beach, Cornwall.

The welder felt ‘nothing’ at the time – but woke up the next day ‘violently’ vomiting with a non-stop fever and terrible shivering.

Soon, a huge red mark with a black spot at its centre where the hogweed had touched him emerged.

‘After that it was absolutely excruciating pain in my calf muscle; my skin was literally feeling like it was on fire’, Nick said.

‘If somebody came with a hacksaw, I would have gladly said please take it off. It was so, so painful.

‘In one of the photographs the blister is like the size of a golf ball – that one was absolutely horrendous; very, very painful.’

The pain grew so bad that standing became a ‘challenge’ for Nick and he was ‘housebound’.

His GP has prescribed him some ‘powerful’ antibiotics – but scars can last for months or even years, and long-term sensitivity to sunlight is possible.

Doctors have warned him he’ll ‘just have to wait and see how things go’.

‘The best I could do was get myself to the toilet or the bathroom, I’ve spent a lot of time in bed, a lot of time sleeping’, Nick said.

‘I can’t stand even now for very long. Walking is getting a little easier.’

Giant hogweed is native to the Caucasus but spread across Britain after being introduced as an ornamental plant in 1817.

Mike Duddy, of the Mersey Basin Rivers Trust, said in 2015 it was ‘without a shadow of a doubt, the most dangerous plant in Britain’.

If exposed, people should thoroughly wash the area that made contact and keep it out of sunlight for a few days, the Woodland Trust advises.