The Brexit Party MEP surprised Julia Hartley-Brewer when the TalkRADIO host asked him whether his party would be prepared to go into a coalition with the Conservatives following the next UK general elections. He replied: “Obviously we hope that we would have more MPs than the Conservatives so that we could be issuing an invitation to them.” Asked whether he believed that was “realistic”, he told the radio host: “Of course it is.

“So yes, we should be ambitious. We should go for the win.”

Nigel Farage’s party will have the chance to have its first MP elected on Thursday when Peterborough residents will return to the polls to elect their MP in replacement of disgraced Labour MP Fiona Onasanya who was ousted after lying about her speeding tickets. 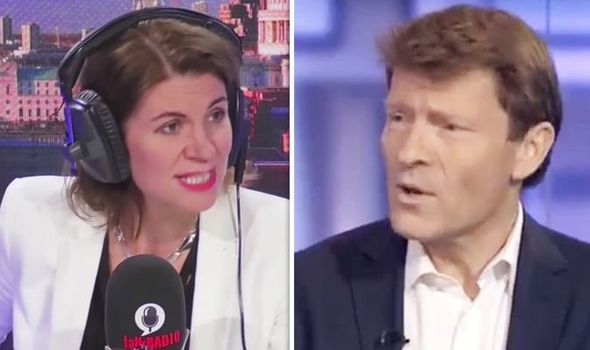 The vote is set to be a close race between Tories, Labour and the Brexit Party.

Businessman Mike Greene, 54, who has appeared on Channel 4’s The Secret Millionaire, will stand for the Brexit Party in its first attempt to win a seat in Westminster.

Launching his campaign earlier this month, he said: “I find it quite disgusting in a way, a disgrace that this by-election even has to happen.

“The people of Peterborough chose Fiona Onasanya in good faith that she would work for them, would deliver for them and I never saw her in this city.

The lifelong Tory said: “The reason I support the Brexit Party is they’re the only party that in my view has absolute clarity and focus on what Brexit is.

After the Brexit Party success at the European elections, this by-election will be an opportunity for the party to test its success in a first-past-the-post election system.