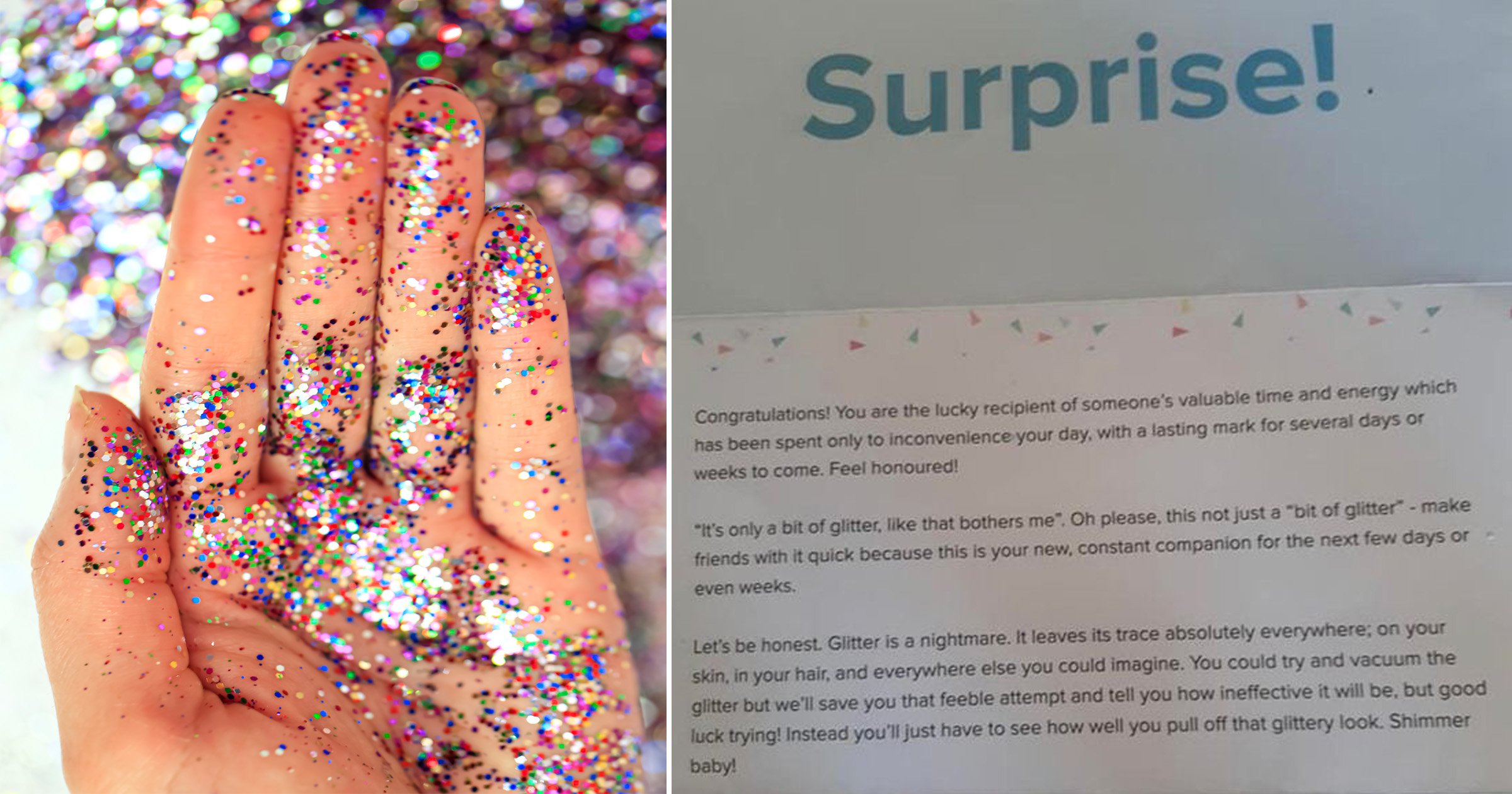 An anti-vaxxer was left feeling ‘intimidated’ in her own home after someone sent her a ‘glitter bomb’ in the post.

The 57-year-old mum, who wishes to remain anonymous, was hit with a shower of glitter when she opened her post on Wednesday.

She believes she was targeted due to her controversial beliefs about the coronavirus vaccine.

The woman, from Clayton in West Yorkshire, said: ‘I had just got out of the shower and was sitting on the stairs opening it. It literally covered me and the staircase, I had to get back in the shower.

‘It came as a shock. At the end of the day you open a letter and that happens. You have no idea what is going all over you, I crapped myself.

‘Afterwards, I thought to myself, “Is there something in with that glitter that’s gone all over me? Will it make me itch or affect my skin?”

‘It had my name and my address which freaked me out. Whoever sent this vindictive letter knows exactly where I live.

‘They know who I am and they could get me at any time. All it does is make me more determined to get my point across.’

‘Glitter bomb’ letters cost around £5 to send and have become the latest way for people to prank someone from afar – usually as a joke.

The full typed letter reads: ‘Congratulations! You are the lucky recipient of someone’s valuable time and energy which has been spent only to inconvenience your day, with a lasting mark for several days or weeks to come. Feel honoured!

‘It’s only a bit of glitter, like that bothers me. Oh please, this is not just a “bit of glitter” – make friends with it quickly because this is your new constant companion for the next few days, or even weeks.

‘Let’s be honest. Glitter is a nightmare. It leaves its trace absolutely everywhere: on your skin, in your hair, and everywhere else you could imagine.

‘You could try and vacuum the glitter but we’ll save you that feeble attempt and tell you how ineffective it will be, but good luck trying! Instead, you’ll just have to see how well you pull off that glittery look. Shimmer baby!

‘Now, it’s time for a little personal message from your secret admirer. Admirer? No, that’s not the right word. Anyway, here it is: “Stay at home. Protect the NHS. Save lives.”‘

The woman, who shared the letter on social media, added ‘People who have not been in the position that I was think it’s a joke, it’s not a joke. That letter is vile.

‘It’s intimidating. It’s like saying we know who you are, we know where you live and you stay at home.

‘I’m an anti-vaxxer and I have a medical condition which means I can’t have the vaccine but I wouldn’t have it anyway because I totally disagree with it.

‘What gets me is people are out there that hate me enough to do that. 100% somebody has sent this because I am an anti-vaxxer.’

She has now warned other people to watch out for similar packages after she spent a long time clearing herself up and her staircase.

‘People have said it must be a friend but I don’t think a friend would be sick enough to do that,’ she said, ‘I’ve got a lot of haters because I’m very opinionated. I say exactly what I think and I don’t care what people say about me.

‘It makes me feel pathetically angry because at the end of the day, where did it come into the fact that we cannot make our own mind up anymore or have our own opinion? Why should I be hated for having an opinion that doesn’t match the narrative?

‘They are idiots! They need to grow up, get a grip, get a life and realise people have opinions. As long as everybody knows it’s out there, it doesn’t affect me.’