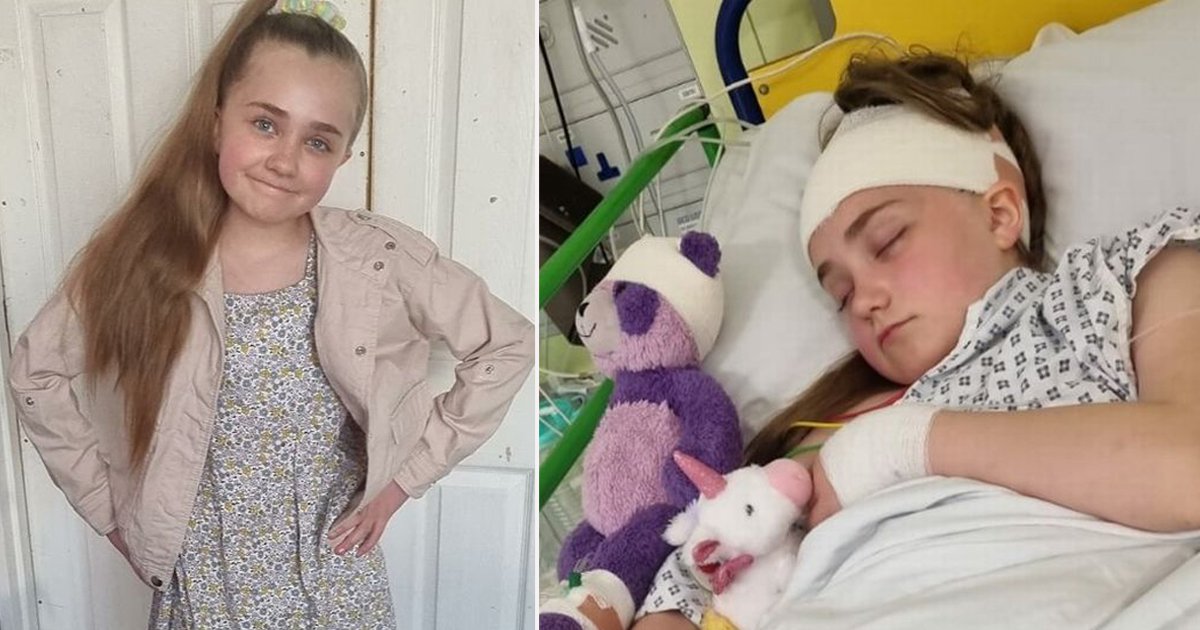 A 10-year-old girl was told she had only a day to live after complaining of blurry vision at school.

Hollie Hartley received the shock diagnosis that she had a serious brain tumour after six hours of tests in hospital.

She had successful surgery to remove it – but then learnt that it formed because she has a rare skin condition where tumours grow on nerve cells.

The Essex youngster’s brother Charlie, 18, said: ‘Hollie didn’t want to get out of bed for school or anything – at first I thought she was just trying to get a day off school.

‘But when she did go in, we got a call to take her home because she was sick and had blurred vision.

‘We took her to the hospital and were sitting there for around six hours while Hollie was being assessed.

‘They were trying to figure out what it was and what they thought was wrong with her eye.’

The Hartley family, from Dagenham, were ‘devastated’ to learn it was a tumour and that Hollie had only 24 hours to live.

Charlie called it ‘the hardest week of my life’.

He said: ‘My sister was asking us whether she would die and if she goes to sleep will she not wake up – it was heartbreaking.

‘But we were trying to be positive for her sake.’

He added: ‘When I saw her in the hospital, it was really difficult. She was covered in plasters and bandages, she had needles in her arm and had to have oxygen. We were in disbelief that Hollie was in this way.’

She then found out she had neurofibromatosis type 1, a genetic disorder which causes tumours to grow on nerves.

Occasionally, like with Hollie, tumours may develop in the brain, on cranial nerves, or on the spinal cord.

She will be living with the illness for the rest of her life.

Charlie said: ‘Doctors told us that Hollie would have to come back every three months for an MRI scan until she’s 16.

‘For most of her life, she will be going back and forth to the hospital.

‘She’s now realising what she’s going through. She wants to make sure everyone is alright and is hiding her pain. It’s really hard to watch.’

A GoFundMe page has been launched by Charlie to help raise funds for Hollie’s treatment and ‘to make the happiest memories for her as she lives with this horrible illness’.

He’s determined to treat her to a trip of a lifetime and ‘make more special memories with his little sister.