As the country begins reopening, it is relying on widespread, free antigen tests to ensure that anyone not yet vaccinated against the coronavirus is also not infectious. 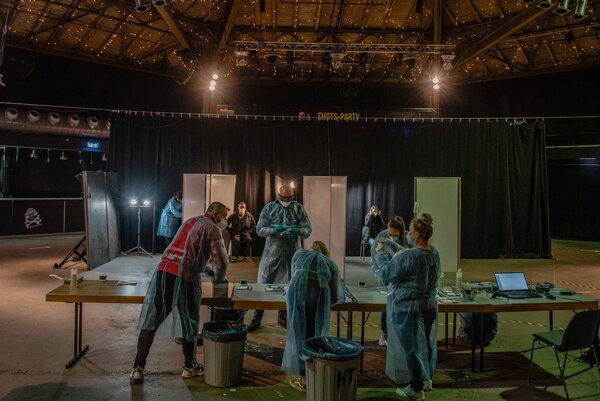 BERLIN — Want to go out for a meal indoors in Germany? Get a test. Want to stay at a hotel as a tourist or work out at the gym? Same answer.

For the many Germans who have not yet been vaccinated, the key to Covid freedom has come from the end of a nasal swab, and rapid-test centers have multiplied at a speed usually reserved for the country’s autobahn.

Abandoned cafes and nightclubs have been converted. Wedding tents have been repurposed. Even the back seats of bicycle taxis have a new use, as tourists have been replaced by Germans being swabbed by testers in full protective gear.

Germany is one of a handful of countries betting heavily on testing — as well as vaccines — to beat the pandemic. The idea is to find potentially infectious people before they can join crowds in concert halls and restaurants and spread the virus.

The testing system is a far cry from much of the United States, where in many places, people began dining indoors or sweating together in gyms with few if any requirements. Even in Britain, where the government gives out free rapid tests and schoolchildren have taken more than 50 million since January, they are not part of everyday life for most adults.

But in Germany, people who want to participate in various types of indoor social activity or personal care need a negative rapid test that is no more than 24 hours old.

There are now 15,000 pop-up testing centers across the country — more than 1,300 in Berlin alone. The centers are funded by the government, which has spent hundreds of millions of euros on the ad hoc network. And a task force led by two cabinet ministers is ensuring that schools and day care centers have enough of these rapid antigen tests to administer to children at least twice a week.

Separately, do-it-yourself kits have been become ubiquitous at supermarket check out stands, pharmacies and even gas stations since they first came on the market earlier this year.

Experts in Germany say that they believe the testing is helping to lower virus case numbers, though proof is elusive.

“We see that the infection rate here is dropping faster than in other countries who have similar vaccination numbers,” said Prof. Ulf Dittmer, the director of virology at the university hospital in the western city of Essen. “And I think a part of that has to do with widespread testing.”