Prince George and Princess Charlotte have joined their parents walking behind the Queen’s coffin at Her Majesty’s state funeral.

The nine-year-old future king and his seven-year-old sister will join the congregation of 2,000 people in Westminster Abbey to remember their late great-grandmother.

The royal family walked behind the Queen’s coffin after it was carried from Westminster Hall, where hundreds of thousands of mourners have paid their respects over the past four days.

King Charles and the Queen Consort walked immediately behind, followed by Princess Anne and Vice Admiral Sir Tim Laurence, Prince Andrew, Prince Edward and Sophie, Countess of Wessex, and then the Prince and Princess of Wales.

The second and third in line to the throne walked in between their parents behind the Queen’s coffin as part of a solemn procession through the Abbey.

Ahead of the service, the Princess of Wales could be seen holding Charlotte’s hand, and giving her a reassuring touch on the shoulder.

As the young royals walked behind their great grandmother’s coffin, Charlotte held her hands clasped in front of her while George had his arms by his side.

They were followed by the Duke and Duchess of Sussex and other members of the royal family. 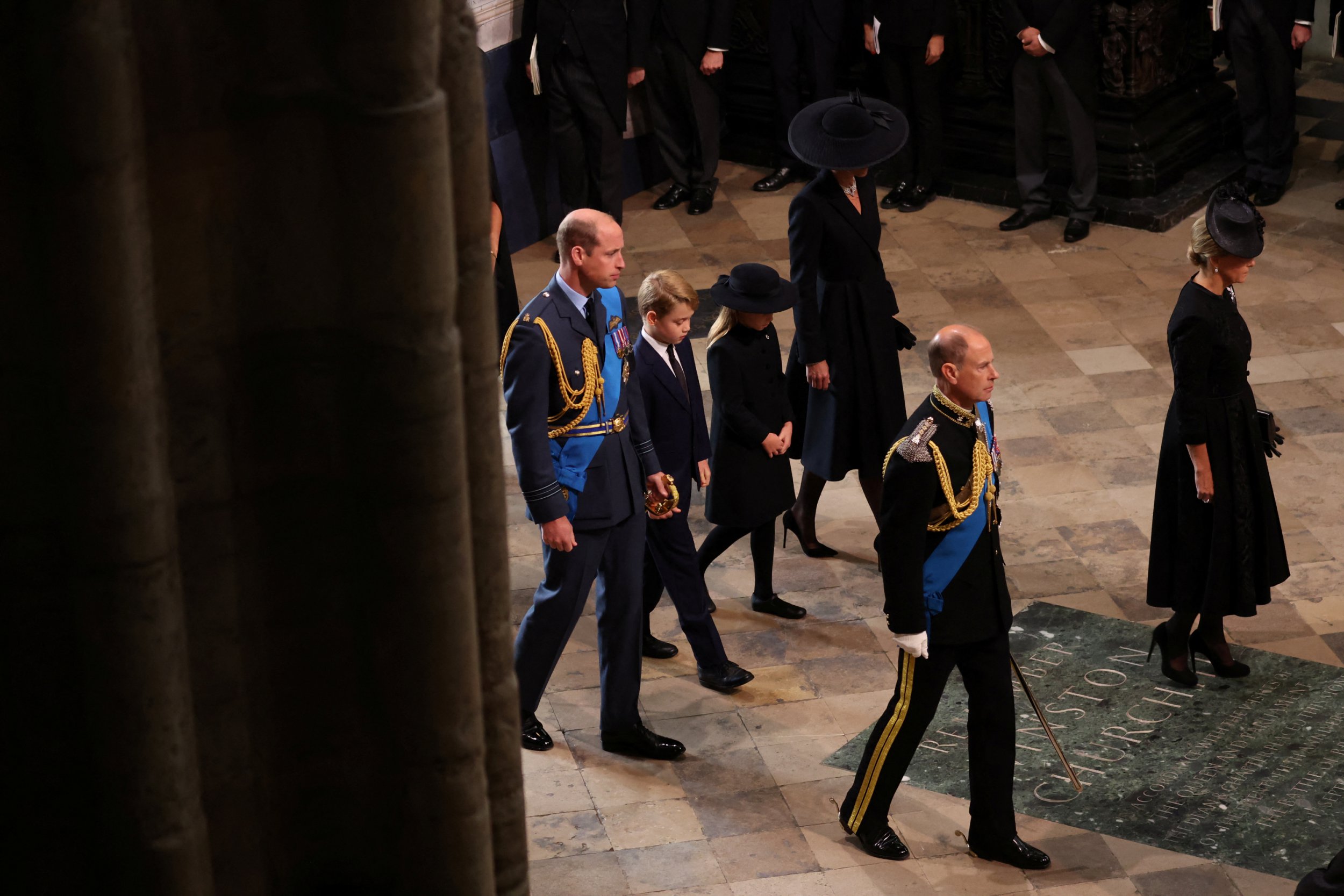 The second and third in line to the throne will take their seats in the front row across the aisle from the King and Queen Consort, who will be sitting in the ornate Canada Club chairs.

They will have their parents, the Prince and Princess of Wales, on one side of them, with Peter Phillips and Zara and Mike Tindall seated to the other.

Harry and Meghan will be seated behind King Charles and Camilla, next to Princess Beatrice.

George and Charlotte, who called Queen Elizabeth II ‘Gan Gan’, are also expected to be at the committal service in Windsor Castle’s St George’s Chapel later this afternoon.

The prince and princess’ four-year-old brother Prince Louis is not set to be there.

His playful antics on the balcony for the Platinum Jubilee delighted royal fans and he is likely to be considered too young to attend.

Before the service, the tenor bell will be tolled every minute for 96 minutes, reflecting the years of the Queen’s life.