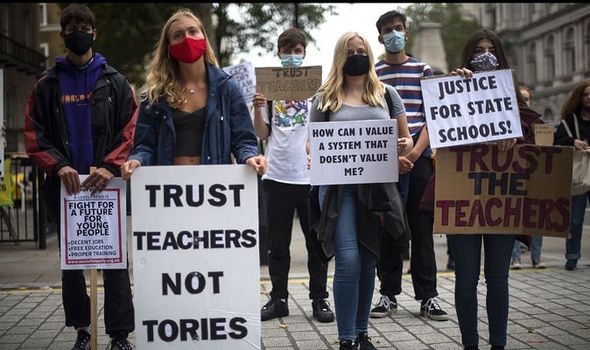 But he also repeatedly declined to give his backing to Ofqual head Sally Collier amid speculation that the qualifications regulator is being lined up as the scapegoat in the row. And Mr Williamson faced more pressure last night with accusations of confusion about when GCSE results will be published. The Department for Education said the results are to be released on schedule tomorrow yet the Cabinet minister indicated the official grades will be confirmed next week.

Ministers faced an outcry over a computer algorithm used to determine results as this summer’s examinations were scrapped due to the coronavirus crisis.

Nearly 40 percent of this year’s A-level students found their grades reduced from predictions made by their teachers.

Despite refusing to budge for several days, Mr Williamson finally caved in to agree that predicted grades can be used as official A-level results if they are higher than that awarded by the computer modelling.

“I’m incredibly sorry for the distress that it’s caused to those young people,” the Education Secretary said in a round of broadcast interviews yesterday.

He insisted that there had been “broad political consensus” across all parties that a standardisation model was needed for teachers’ assessments of grades as a substitute for exams this summer.

And appearing to shift the blame towards Ofqual, the Cabinet minister said the regulator “didn’t deliver” the grading system that the Government had been “reassured” would be in place.

Asked about his own position, he said: “What we’re doing is we’re focusing on delivering the grades for those children.

“We’re making sure that we’re going to make sure that all schools are returned and I’m absolutely determined over the coming year that I’m going to be delivering the world’s best education system.”

Declining to say whether he had offered to resign, Mr Williamson admitted having an uncomfortable conversation with the Prime Minister.

“But my belief is if something’s wrong, if something isn’t working, the key thing to do is to fix it. That’s what I did and that’s what I’d always do.”

He said: “We need to find that out. I’d like to see the minutes of everything that has gone on.

“I also think we should find out how much this has cost the taxpayer just so that we make sure that this never happens again.”

Mr Halfon added: “What has happened has been a mega-mess and I really feel sorry for all the pupils and students and parents across the country who’ve had so much anguish over the past week through no fault of their own.”

Labour’s shadow universities minister Emma Hardy said that Mr Williamson’s delay in allowing pupils to be given grades estimated by teachers has caused a “massive headache” for universities.

“His delay in making this decision has meant that more and more places at university have been filled up.

“Many students have gone ahead and accepted their second-place offers or other offers, or in fact got offers that maybe in the past they wouldn’t have actually been entitled to, she said.

Asked whether Mr Williamson should quit, she said: “Well, I know if I was in charge of the Government he certainly wouldn’t be in my team, but that’s a matter for Boris Johnson.”

Labour last night urged the Education Secretary to clarify how the GCSE results will work after the switch towards accepting teacher’s predictions days before their scheduled release.

An announcement from the Department for Education on Monday said schools and colleges would inform students of their GCSE centre assessment grades on Thursday and official results will be released next week.

But when asked on BBC Breakfast what GCSE students will receive on Thursday, Mr Williamson said: “Youngsters will be told whichever is their highest – whether it is that centre-assessed grade or whether that is the moderated standardised grade that has been provided by Ofqual.

Kate Green, Labour’s shadow education secretary, said: “Only a day after the Government were dragged in to a screeching U-turn, we have seen fresh confusion on what will happen to young people in the days ahead.

“The repeated incompetence of the Education Secretary and this Government are creating confusion and unease for a generation of young people and their families.

“If young people do not know all of their grades they could be concerned about losing college and apprenticeship places. This is not acceptable.”

The Association of School and College Leaders (ASCL) wrote to the Education Secretary to request an immediate independent review into the grading fiasco.

Geoff Barton, the general secretary of ASCL, said: “This degree of transparency is necessary at a time when public confidence has been badly shaken.

“It seems to be clear that the statistical model for moderating centre-assessed grades was flawed and that it produced many anomalous results.

“But how did this happen, why were the problems not foreseen, and why were ministers not on top of this? Most importantly, what lessons can we learn for the future?”

Russia Freezes Navalny’s Assets as He Recovers From Poisoning