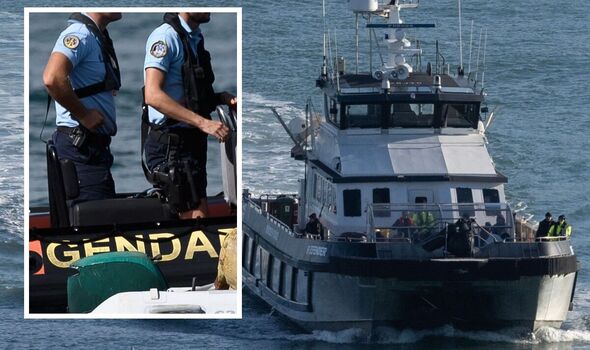 French coastguards have accused Britain of leaving 38 “exhausted and afraid” people adrift in a dinghy that floated towards the British Isles a few weeks ago – sparking a fresh row between the UK and France. Coastguards from the union Solidaires Douanes claim the Border Force said they would rescue the boat but did nothing as it floated into the British part of the English Channel. But the Ministry of Defence rejected the claim on the basis there who recorded no small boats passing into UK waters on the day of the incident.

British sources also said there was no risk to life as the boat was being followed by the French boat the Kermorvan. The incident is said to have taken place on January 2.

Remi Vandeplanque, a French coastguard involved in the incident, said they had tracked the boat in French waters and contacted the Border Force as they continued to follow it into UK waters.

He said: “When we started following them they were in French waters then we followed them into British waters.

“They were Border Force, British coastguard. We spoke to them on the VHF radio. They said OK they would rescue the people on the dinghy.”

It is said the dinghy reached the UK at around 5.30 pm on January 2 but was rescued by French coastguards at 9pm.

After entering UK waters, the dinghy reportedly drifted back into French waters.

People onboard tried to move the boat back into UK territory but had issues because of strong currents and the GPS’ on their phones.

Vandeplanque said they saved the “exhausted and afraid and frozen” people by taking them onboard and giving them hot drinks, food and blankets.

He claimed Britain “didn’t push them back” but rather let the currents take them adrift.

However, British rescue sources told the Telegraph they had been in contact with the French coastguards and that vessels were on standby in case the situation worsened.

They also emphasised the claims were made by a union, rather than the government agency itself.

According to the MOD, only one boat containing 44 people arrived in the UK on January 2. The next day, there were said to be no boat crossings.

According to the statement posted by Solidaires Douanes: “British coastguards abandoned 38 people who were trying to reach the UK.”

They claimed the French coastguards were told by the Border Force Tycoon boat that it had no space to pick the desperate people up.

Angèle Vettorello, a French NGO volunteer for Utopia 56, which works in northern France, was patrolling the coast that night when the 38 people who were said to be saved by the French coastguard.

She said their clothes were “very wet” and that their phone’s GPS trackers indicated they had been into UK waters before their engine failed.

She added that when they arrived in Calais at around 11pm , they were ditched on the street and one person was sent to hospital with hypothermia.

A statement by the MOD on Tuesday read: “The Ministry of Defence does not believe that any migrants arrived on their own terms in a small boat from the English Channel.”

The data it gathered to reach this conclusion included people who are detected on arrival in the UK and people detected in the channel by UK authorities and then brought into the country.