ROME — After decades of bureaucratic delays, corruption and resistance from environmental groups, sea walls designed to defend Venice from “acqua alta,” or high water, went up on Saturday, testing their ability to battle the city’s increasingly menacing floods.

By 10 a.m. all 78 floodgates barricading three inlets to the Venetian lagoon had been raised, and even when the tide reached as high as four feet, water levels inside the lagoon remained steady, officials said.

“There wasn’t even a puddle in St. Mark’s Square,” said Alvise Papa, the director of the Venice department that monitors high tides. Had the flood barriers not been raised, about half the city’s streets would have been under water and visitors to St. Mark’s Square — which floods when the tide nears three feet — would have been wading in a foot and a half of water, he said.

Designed some four decades ago to help save Venice from flooding, the mobile barrier system was delayed by cost overruns, corruption, and opposition from environmental and conservation groups. The cost of the protection system tripled from initial estimates, and a 2014 bribery scandal led to the arrest of the then mayor, Giorgio Orsoni, and dozens of others, including politicians and businessmen involved in the project. Mr. Orsoni and some of the others charged were acquitted.

“We found a difficult situation and slowly, slowly we’ve been able to resolve things,” said Giuseppe Fiengo, one of the commissioners who have overseen the project since 2014. “The important thing is that today, for the first time, with high water, Venice didn’t flood.” 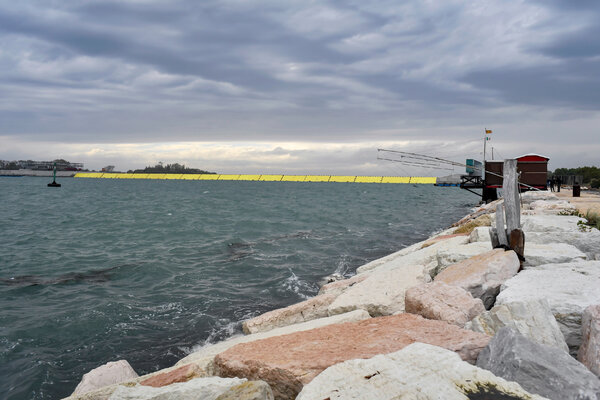 The floodgates have been tested several times over the past summer, but under less threatening weather conditions than those on Saturday.

“This time we raised them to defend Venice,” said Alberto Scotti, the engineer who designed the floodgates.

The system is not fully operational yet. Some infrastructure still needs to be completed, and workers haven’t been fully trained, so Saturday’s operation was technically a test.

“But it’s a test that had an objective, to guarantee the safety of the city, and it did,” Mr. Scotti said.

Though significant, Saturday’s tide levels are a far cry from the exceptionally high water levels seen last year — when it hit 6 feet — and the year before, endangering the city and prompting the mayor to declare a state of emergency.

Mr. Scotti said that the floodgates had been designed to defend the city “even in anomalous situations,” and even with high tides reaching nearly 10 feet.

While supporters of the project welcomed Saturday’s test as a major victory, some pointed out that the floodgates won’t fully solve the growing threat posed by climate change. Increasing sea levels and new wind patterns could force the floodgates to stay up so often that it could destroy ship traffic or turn the Venice lagoon into a swamp.

“With climate change, there’s a chance that the floodgates could be employed 150-180 days a year, becoming an almost fixed barrier and severing the lagoon’s relation to the sea,” said Cristiano Gasparetto, an architect and former provincial official who has long opposed the project.

“If the lagoon is cut off from the sea for long periods, it dies, because the natural exchange of waters stops, and all of its organic life risks decaying,” he said.

“If the lagoon dies, Venice dies,” he added. “It loses its characteristics.”

Mr. Gasparetto also doubts that the floodgates would work in extreme conditions with high waves and strong winds. “There is still a lot of uncertainty. Today’s test says nothing when it comes to that,” he said.

Concerns also remain about the costs of maintaining the floodgates, which would be worn by saltwater.¶

Still, the functionality of the gates on Saturday was greeted in Venice as progress.

“Today we had the certainty that it works,” Luca Zaia, the president of the Veneto region, which includes Venice, told reporters on Saturday. “At least we know that it can help Venice.”