First Sea Admiral opens up about first meeting with Queen

First Sea Admiral opens up about meeting with Queen

First Sea Lord Admiral Sir Ben Key said that what he remembers of his first meeting with the Queen last May were “her sparkling eyes, the wisdom and the interest” that the late monarch showed for the Armed Forces and their families. Referring to his impressions following the meeting, he praised the Queen for being able to “draw connection” with people as well as to “remember things in a way that was remarkably powerful”, however, without ever showing “a hint of arrogance”. In reference to the vigil, he recalled the “stiffness” which characterised the atmosphere within Westminster Hall and said it felt like everyone was “within themselves, living their own private moment of reflection”.

“I’ve had the huge privilege of commanding one of her particular ships HMS Lancaster, and through that I had a connection with her most recently in May when I had to cal on her in my new tole and report on her fleet.”

He continued: “What I remember from that was the sparkling eyes, the wisdom, the interest, not so much actually in us but in our people and our families.

“She was able to draw connections and remember things in a way that was remarkably powerful but never done with a hint of arrogance. 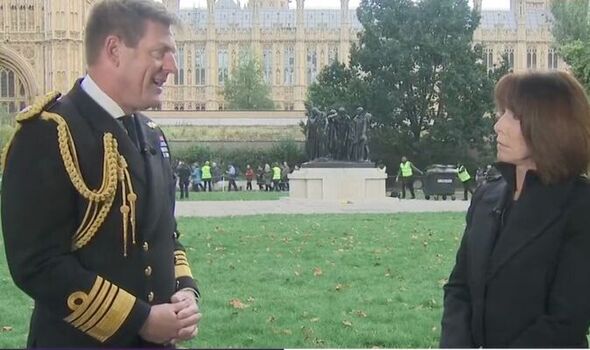 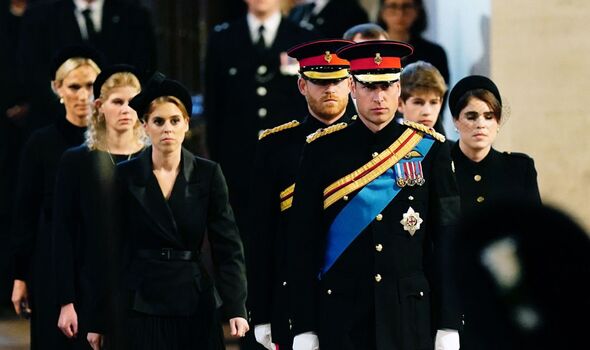 “Although I was also aware that if I got slightly out of line with a claim, she was very quick to gently prompt me back.”

Referring to the vigil held on Friday evening in Westminster Hall, he added: “[It’s been] a privilege to be able to join the many who have been managing vigil around the late Majesty’s coffin, just to experience some of the quite extraordinary atmosphere in Westminster Hall.

“Everyone has been living through their own private moments of reflection, thanksgiving and celebration of a remarkable life.”

He continued: “For me and fellow service chiefs to join that act of remembrance was a significant opportunity which we cherished.

First Sea Admiral opens up about meeting with Queen

“It’s the stillness, the only movement apart from the changing of the visual, it is this continuous sort of stream of people moving past slowly and very steadily.

“You’re just aware of everyone being within themselves. It really felt remarkably calm, whilst nobody stopped, it felt as if actually everyone’s individual moment was stopping as they reached the coffin”.

The Queen’s eight grandchildren, including Prince William and Prince Harry, stood vigil around the Queen’s coffin at Westminster Hall on Friday evening.

The eight grandchildren stood vigil at different points around the coffin, with Prince William standing at the head of the Queen’s coffin and Prince Harry at the opposite side. 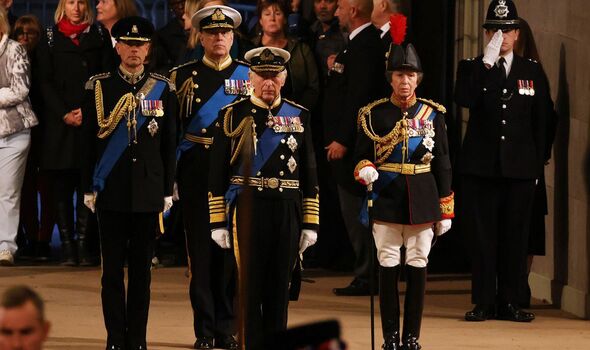 The vigil started at 6.01pm and lasted for around 15 minutes.

Other members of the Royal Family, including Queen Consort Camilla, watched the vigil from the gallery in Westminster Hall.

The Queen will lie-in-state in Westminster Hall until the day of the funeral which will take place tomorrow morning, 19 September.

The Queen arrived in Westminster Hall on Wednesday afternoon, 14 September, after a procession which lasted around 40 minutes and started from Buckingham Palace.

Since Wednesday afternoon, members of the public have been joining the line outside Westminster Hall to pay tribute to the Queen during the lying-in-state.