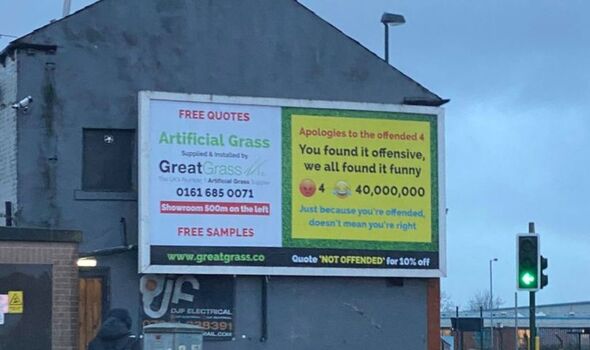 A firm that was ordered to take down its billboard poster because it “offended” members of the public has poked fun at the four people who complained in its new advertisement.

The company’s poster, situated on a busy junction in Hollinwood, Greater Manchester, featured a headline stating the company were “Artificial Grarse Experts”.

Underneath the text was an image of a woman wearing only a thong with text that stated: “Perfect 365 days a year… Get laid by the best.”

Now, the artificial grass company has poked fun at those who had been offended by their previous sign with a new one, and they have been backed by hundreds in the Facebook comments, reports Manchester Evening News.

The new poster “apologised” to the “offended four” adding: “You found it offensive, we all found it funny.”

It is a message wholeheartedly supported by those on Facebook who saw the original poster as a bit of fun.

Sharon Beaver said: “Some people really have nothing better to do than moan about a poster, when there is more going on in the country they need to take it as it’s meant just jokingly.

“Something to cheer all up in the doom n gloom of this country has to offer. Keep them coming that’s what I say.”

Gail Bee Zee added: “They should poke fun this world has gone bonkers…I’m offended they’re offended over a billboard.”

Katherine Winstanley agreed those complaining shouldn’t have been offended: “That’s what is wrong with people. No sense of humour.”

Natalie Pollitt said she would have loved to be a customer for them.

She said: “I am a woman, I don’t find it offensive, I think it may have distracted a few drivers because it’s so funny.

“Unfortunately I don’t need any grass to be laid otherwise they’d of had my custom.”

Great Grass MCR Ltd said the original billboard had been up for months before a complaint was first made, but said the overall reaction had been great for business.

“It had been up for three months before it received three complaints,” owner Mike Allen said.

“We’ve had that billboard spot for five years and no one has ever seen it but now that people have complained, everyone’s seen it.

“It was never meant to be offensive and we’ve had thousands of comments telling us they found it funny. It’s been shared around the world and featured in loads of newspapers.”

Mike said the new poster has received a great response and he intends to keep the tongue-in-cheek messages coming.

“In the end, it’s had a positive effect on us and it’s worked out in our favour,” he added.

“We’ve turned it on its head and it’s been the best thing to happen to us.

“In this day and age, with what’s going on in Ukraine and this country, there’s a million and one other things that we should all be worrying about instead.”