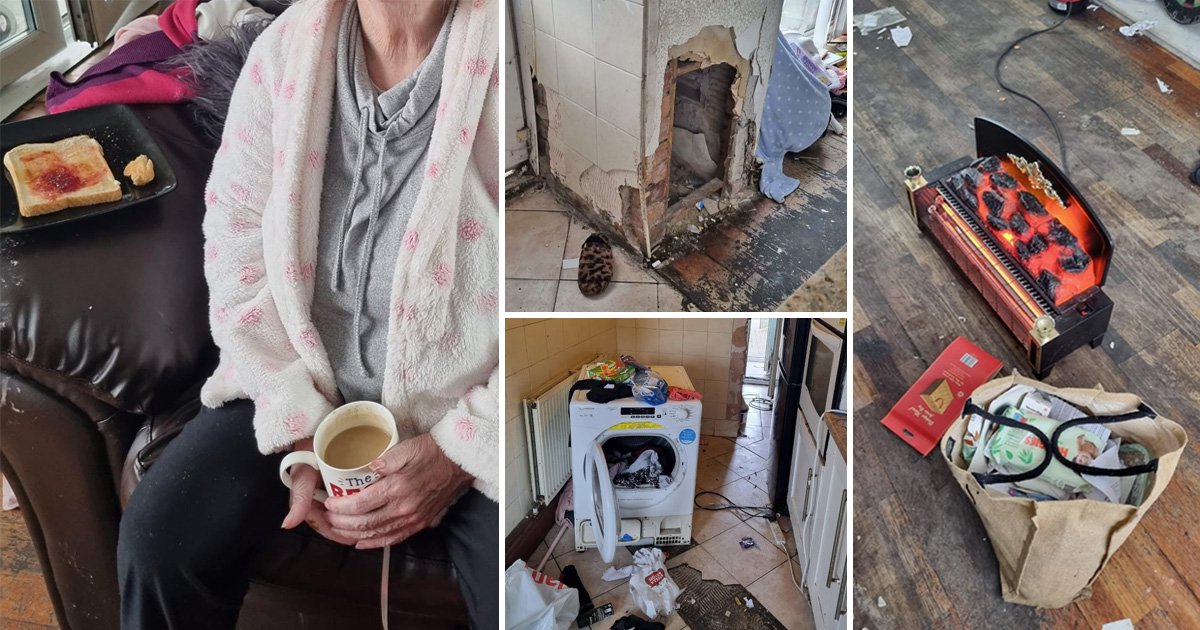 A ‘humbling’ pensioner left without heating or hot water ‘will die’ this winter as the cost-of-living crisis continues to hit the vulnerable.

Irene relies on a tiny electric heater to warm up her entire Merseyside home after her gas valves were shut off.

Without heating, she’s unable to cook so has to make do with jam and toast.

Alarming photos show the dire straits Irene is living in. Her single bar fire. Her gas hob that doesn’t spark. Her backdoor that doesn’t shut, letting cold air in.

Irene’s neighbour, fearing this will put her health on the line, alerted Depher Community Interest Company which helps those living in run-down conditions and can’t afford the upkeep of their homes.

The pictures were shared on Twitter by the company’s founder, James Anderson.

Arriving at Irene’s home, Anderson took one look around the property and knew he ‘had to do something’, he told Metro.co.uk.

‘We couldn’t just leave her to live like that, it’s just not right. It’s about being part of a community, showing Irene that people do care,’ he said.

‘The home was just so cold and Irene is on oxygen, she’s very vulnerable,’ Anderson said, adding: ‘She is a very humbling and beautiful lady.’

Anderson is hoping local businesses and tradespeople can chip in to help make Irene’s home safe to live in again as he raises money to help other hard-hit pensioners.

‘A lot of people are facing a very bleak winter in the future because of the cost-of-living crisis,’ Anderson said.

Inflation continued its steep climb as it rose to 10.1% in September, according to the Office for National Statistics.

Yesterday brought even more painful news as the Bank of England said in a forecast the economy will continue to falter across a two-year-long recession.

While the government’s lifebuoy to households, its flagship energy prices freeze, will last until April rather than for two years.

If households are placed back on energy regulator Ofgem’s price cap, this could lead to bills rocketing up by 74%, analysts Cornwall Insight has warned.

Irene’s plight has prompted a lot of questions about ‘how was it allowed to get to this position’, said Anderson, when people should be asking a different one.

‘The question should be, “how do we get out of this situation?”‘ Because asking the questions now will defer us away from what we do, so the help will take even longer,’ he said. ‘We need to act now.’

‘If she doesn’t get the help that needs, she going to suffer drastically during the winter. There could be a possibility that she will die which is something we don’t want.

‘We don’t know what the winter is going to be like. She’s on oxygen. She’s got health conditions that need to be looked at.’

Showing the extent of the cost-of-living crunch, Portsmouth City Council has created a network of venues for freezing residents to go inside to keep warm.

Just how much longer people will be able to live like this is uncertain, said Fuel Poverty Action.

‘As well as grief at the idea that anyone should have to live this way, Irene’s story should lead to fury with the political decisions that have forced many thousands of people into these Dickensian conditions,’ the grassroots campaign group said.

‘Decisions about housing, pensions, benefits, council funding, and energy prices are bringing Irene and others to a point where they risk dying of cold while others get richer every day, and the energy corporations rake in eye-watering profits.’

For now, all Irene can do is get by, as Anderson tweeted a picture of Irene with a cup of tea and toast.