Fears of violence amid heightened tensions over Belfast bonfires 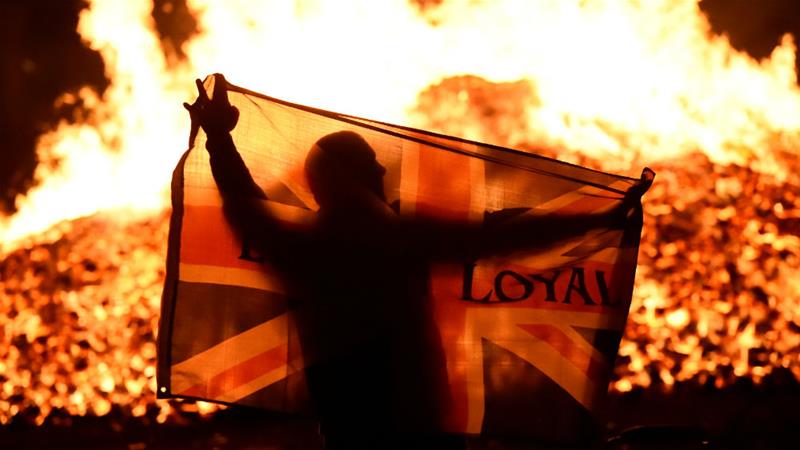 Huge bonfires will be set ablaze across Northern Ireland late on Thursday night to usher in July 12.

“The twelfth” is the main date in the Protestant loyal order marching season, marking the victory of the Protestant king, William of Orange, over the Catholic king, James II, in the 1690 Battle of the Boyne.

While most events marking the day are peaceful, fun and family-friendly occasions, the date and the accompanying marches have often been a flashpoint for sectarian violence, and tensions in Northern Ireland – whose population is split roughly equally between Protestant and Catholic Christian denominations – are heightened each year at this time.

This year, organisers of a bonfire at an east Belfast sports complex have been formally asked to abandon their plans and leave the site, with local authorities wary of armed confrontation.

The Ulster Volunteer Force (UVF) – a paramilitary group classified as a “terrorist” organisation by the UK, Ireland and United States – opposes Belfast City Council’s proposed clearance of the six-metre pyre of wooden pallets and tyres. Graffiti featuring the group’s signature appeared in the area in recent days, threatening anyone who acts to remove any of the bonfire material.

On Thursday, two Police Service of Northern Ireland (PSNI) vehicles arrived at Avoniel Leisure Centre at around 5am, with a statement read from inside one of the vehicles, requesting that those on Belfast City Council property vacate the area.

Police then immediately left the scene.

“Belfast City Council has stated that anyone present within Avoniel Leisure Centre and its grounds will be regarded as trespassers, until the complex is reopened next week,” a spokeswoman said.

The bonfire and supporters remain on site, and organisers said they hoped to light the bonfire as planned later.

The council has been warned by police that armed violence could break out if the bonfire is pulled down.

“The intelligence picture indicates that any attempt by the council to remove bonfire material will cause a severe violent confrontation, orchestrated by the UVF,” said PSNI Assistant Chief Constable Mark Hamilton.

“The use of firearms during such disorder cannot be ruled out.”

Robert Girvin, from the East Belfast Cultural Collective, is one of the fire’s organisers.

“At this time I can’t fault the PSNI – the PSNI came down and talked to us on the site, they have been amicable, informed us honestly and openly what is going on,” he told the Press Association (PA) news agency.

Girvin also rejected a suggestion that the bonfire was controlled by the UVF.

“It is controlled by the grannies, the mothers, the sisters, the children, the people of the local community,” he said.

“That’s who controls this, that’s who organises it and that’s who wants it. No-one wants violence.”

The workers contracted by the council to remove the fire materials have pulled out of the job, PA reported.

On the night of the 11-12 July last year, 13 vehicles – including a bus full of passengers – were hijacked and torched by masked men setting up burning roadblocks in Belfast, while in Londonderry young republican activists threw petrol bombs at police, and fire engines came under attack in several parts of the region.