Bayern Munich and Sevilla will be battling for the European trophy in Budapest despite growing concerns over fan safety in a stadium that is prepared to host 20,000 people. 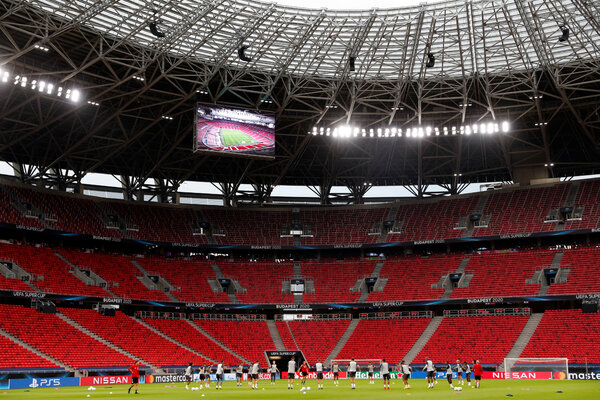 BUDAPEST — A showdown between two top European clubs, Bayern Munich and Sevilla, in a high-profile soccer match is expected to be played as scheduled in front of thousands of fans in Budapest on Thursday night despite a sharp rise in coronavirus cases in Hungary.

The match, for the UEFA Super Cup, will be played at Puskas Stadium, and the organizers say that a maximum of 20,000 people will be admitted, a third of the arena’s capacity, as part of a range of virus-prevention measures.

“We worked really hard with the authorities here to try and make the circumstances align so that it’s safe for people to attend,” said Philip Townsend, communications director for UEFA, European soccer’s governing body.

Hungary is currently experiencing a surge in recorded coronavirus cases that is significantly higher than the numbers seen when Covid-19 entered Hungary earlier this year.

Budapest was designated a “risk area” by the German government last week because of an increased number of recorded coronavirus cases, and Markus Söder, the leader of the state of Bavaria, where Munich is situated, warned Monday of the dangers of the coronavirus spreading at the game.

Concerns over the virus at the Super Cup, in which the winners of the two top Europe-wide club competitions are pitted against each other, may be grounded in recent memory. In February, a soccer game was seen as a factor that contributed to the acceleration of the virus in Italy.

UEFA has made 6,000 tickets available to fans of both Sevilla and Bayern Munich, but on Wednesday it appeared that neither club could muster enough attendees to take advantage of their ticket allotments.

Only 500 Sevilla fans were expected to travel to Budapest, and around 1,300 from Munich, as of Wednesday, according to UEFA, though that number could shrink given the concerns raised by German officials. 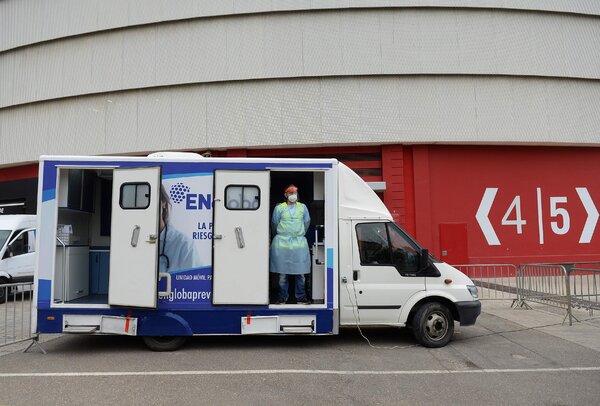 Of the remaining tickets, it is estimated that 90 percent have been sold to Hungarian fans. UEFA and the Hungarian Football Federation announced this month that it would give employees of the Hungarian national ambulance service 500 tickets.

Ferenc Falus, Hungary’s former chief medical officer, has criticized the decision to go ahead with the game, and raised concerns that fans would not follow social distancing guidelines during the game, or before and after it outside the stadium.

“This is a human experiment,” he said.

Prime Minister Viktor Orban’s enthusiasm for soccer is well known, and his government has aggressively steered public funds into the game at a time when Hungary’s health care system remains underfunded.

With coronavirus test positivity rates above 10 percent, Dr. Falus said, “there are no guarantees this will not lead to more illness, hospitalizations, even deaths in the days and weeks after the game.”

But the concerns of medical experts like Dr. Falus are downplayed by event organizers who say that coronavirus mitigation measures will ensure the safety of fans.

“I wouldn’t call it an experiment,” says Jeno Sipos, a spokesman for the Hungarian Football Federation. “It’s a priority project in which the organizing committee determines how the match can be played with the most stringent safety measures in place.”

Citing a comprehensive risk assessment, Hungarian soccer officials stress that comprehensive measures have been put in place to ensure the safety of those attending the match. UEFA awarded Budapest the match in June.

The temperature of fans will be taken at the gates. Social-distancing rules are encouraged for those arriving at and departing from the stadium. Mask-wearing will be compulsory throughout the stadium, but is only “strongly advised” for fans in their seats, with one and a half meters mandated between fans not paired together.

Social distancing is also compulsory at concession stands, and even the men’s restrooms have been reorganized to provide more distance between fans.

However, some fans complain of a lack of coherent guidelines for those attempting to enter Hungary from abroad.

Ronan Evain, executive director of Football Supporters Europe, an association of soccer fans that claims to have members in 48 European countries, said that the Hungarian Embassy in Paris had been unable to answer questions regarding entry requirements into the country just days before the match.

“It was harder to leave my home country than it was to enter Hungary,” he says, citing what he described as confusion over entry requirements and misunderstandings at the airport in France, where authorities seemed unaware of the special arrangements made for travelers to the match.

Upon entering Hungary, he said, he was asked to provide the results of his coronavirus test, which the authorities did not seem to notice was issued in French, and he was not asked where he would stay and when he would be leaving.

Mr. Evain’s quest to attend the Super Cup involved “a lot of improvisation and uncertainty,” and he was frustrated that adequate information about health and safety protocols were not communicated to fans. “Anything you publish has to be crystal clear, and that definitely has not been the case for this game.”