BRUSSELS (Reuters) – European Union leaders will consider pressing Britain to delay Brexit by at least a year to find a way through its domestic deadlock, the chair of next week’s EU summit said on Thursday. 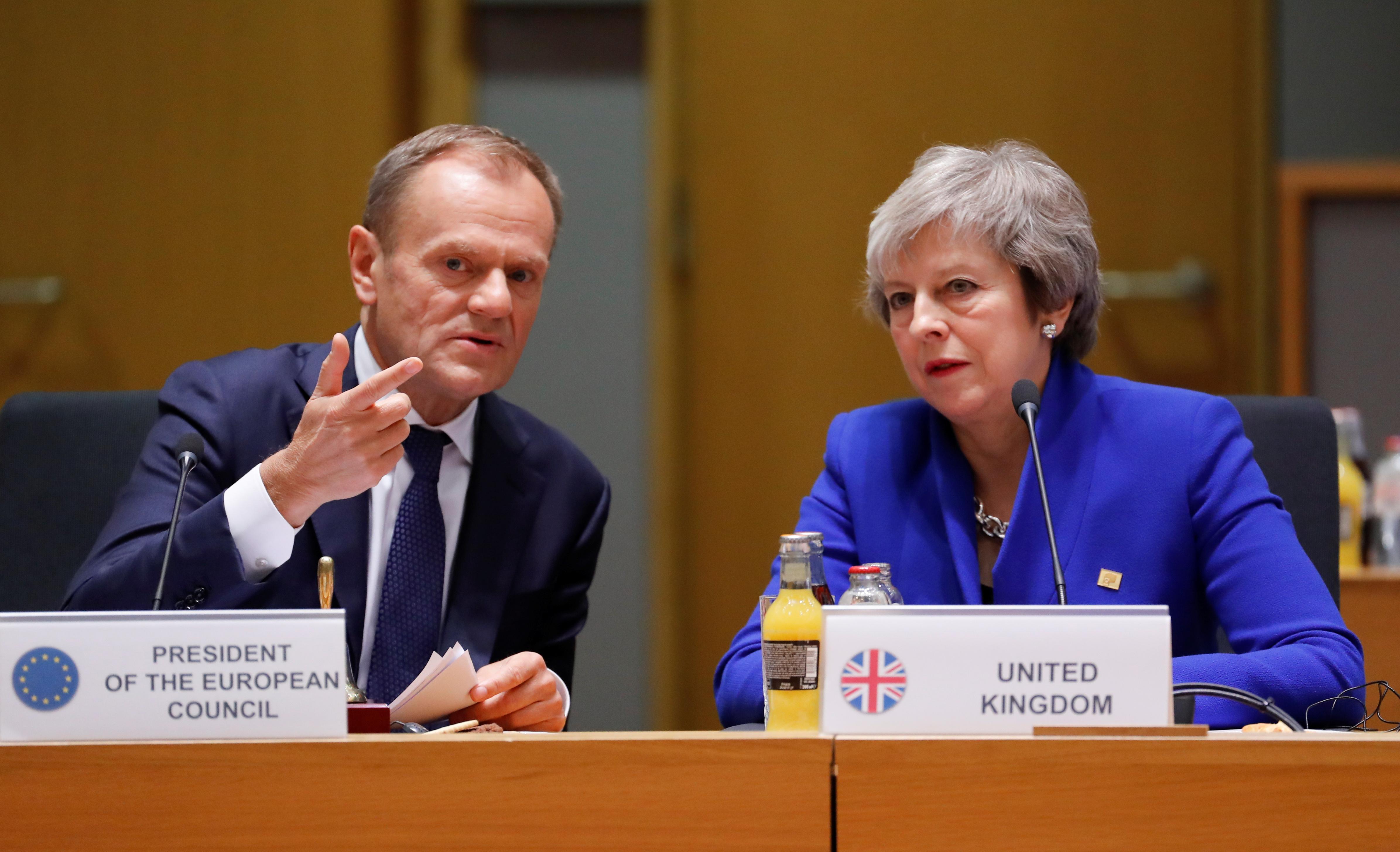 “I will appeal to the EU27 to be open to a long extension if the UK finds it necessary to rethink its Brexit strategy and build consensus around it,” European Council President Donald Tusk tweeted, referring to the 27 other national leaders who will meet Prime Minister Theresa May next Thursday.

He made the proposal before British lawmakers voted to seek a short delay if May gets her previously rejected Brexit deal through parliament before the summit — or a longer delay if she fails, as many expect her to.

However, Tusk was well aware that the question of extending the Brexit deadline is likely to be an issue at the summit — and that EU leaders appear very unsure how they should react.

A senior EU official said Tusk believed Britain would, if May fails to avoid a third parliamentary defeat next week for the Brexit deal she negotiated with Brussels, need at least a year and possibly much longer to find a national consensus on how – and indeed whether – it wants to quit the bloc.

Such an extension, which would depend on May lodging such a request, would require Britain to elect members of the European Parliament when all states hold votes on May 23-26, the senior official said. It would require unanimous support among the 27 other member states, whose positions are so far unclear.

In the run-up to the two-day quarterly summit, Tusk will travel to meet leaders including German Chancellor Angela Merkel and French President Emmanuel Macron on Monday and Irish Prime Minister Leo Varadkar on Tuesday. On Friday, he will meet Dutch Prime Minister Mark Rutte, a prominent voice on the Council.

A number of leading EU figures have been calling for the bloc to refuse any extension beyond the May elections, or at the latest beyond July 2 when the new EU legislature convenes. Macron has voiced doubts about a longer extension, while Merkel has appeared more open to giving Britain time.

Tusk, while hoping May can win lawmakers’ support for her Brexit deal before the summit, believes a short extension would achieve little. He wants leaders to consider a longer delay that could give Britain time to find a broader consensus, perhaps through a general election or a new referendum on EU membership.

The motion passed in London on Thursday asks May to seek an extension to June 30 if lawmakers back her deal next week. If they do not, she would seek a much longer delay rather than leave without a deal.

EU discussion of a long extension could bolster May’s tactic of using that as a threat to persuade hardline Brexit supporters to back her deal rather than risk not leaving the EU at all.

Many in Brussels and in national capitals are in two minds. Some feel the process is distracting the bloc from more pressing business and its May elections. But none relishes the prospect that Britain might end up leaving chaotically without a deal.

A spokesman for the European Commission, the EU executive, said EU leaders would put a priority on avoiding disruption to EU institutions.

Commission President Jean-Claude Juncker has urged Tusk to ensure that leaders insist Britain either leave before the EU elections — for fear of raising doubts about the legislature’s legitimacy — or take part in the vote.

The prospect of Britain returning lawmakers to the European Parliament is also a divisive issue. The centre-right European People’s Party (EPP), to which Merkel belongs, has no British member as May’s Conservatives broke away a decade ago. The return of British Labour lawmakers to the chamber could push the centre-left close to parity with the EPP, according to polls.

A British EU election would also bolster the presence of anti-EU forces in the parliament, a development Macron, Merkel and others would prefer to avoid.

In a reply to Tusk’s tweet, Guy Verhofstadt, the liberal leader and Brexit coordinator in the European Parliament, hardened his calls for Britain to be cast out as soon as possible unless its lawmakers can agree on a clear strategy.

“Under no circumstances an extension in the dark!” he tweeted. “Unless there is a clear majority in the House of Commons for something precise, there is no reason at all for the European Council to agree on a prolongation.”