Estonia to vote in tight election 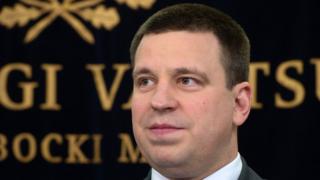 Estonians will vote in a general election on Sunday, pitting the ruling Centre party against the liberal Reform party and a strong populist challenge.

The Conservative People’s Party of Estonia (EKRE), which has called for a referendum on EU membership, looks set to come third.

Nearly a quarter of Estonia’s 881,000 eligible voters have already cast their ballots by e-voting.

Estonia uses proportional representation to pick members in its 101-seat parliament, and results are due at midnight.

Both Centre and Reform strongly support EU and Nato membership, and have alternated in power since the country’s independence from the Soviet Union in 1991.

The two main parties support continued austerity policies, which have left Estonia with the lowest debt level of any Eurozone country but have caused anger in rural communities who feel left behind.

What are the main issues?

Reform and Centre have campaigned on tax changes, the former to help job creation and the latter to boost state revenues.

But the eurosceptic EKRE, which has pushed anti-immigration rhetoric, is promising to slash taxes.

The party only took seven seats in the 2015 general election but looks set to gain ground.

Estonia’s Russian minority, who make up a quarter of the population, are also a key issue in the campaign.

The Centre party wants to maintain the joint Estonian- and Russian-language school system – something both Reform and EKRE plan to abolish.

About five or six other smaller parties are also expected to win seats in the parliament, which could make forming coalitions tricky.