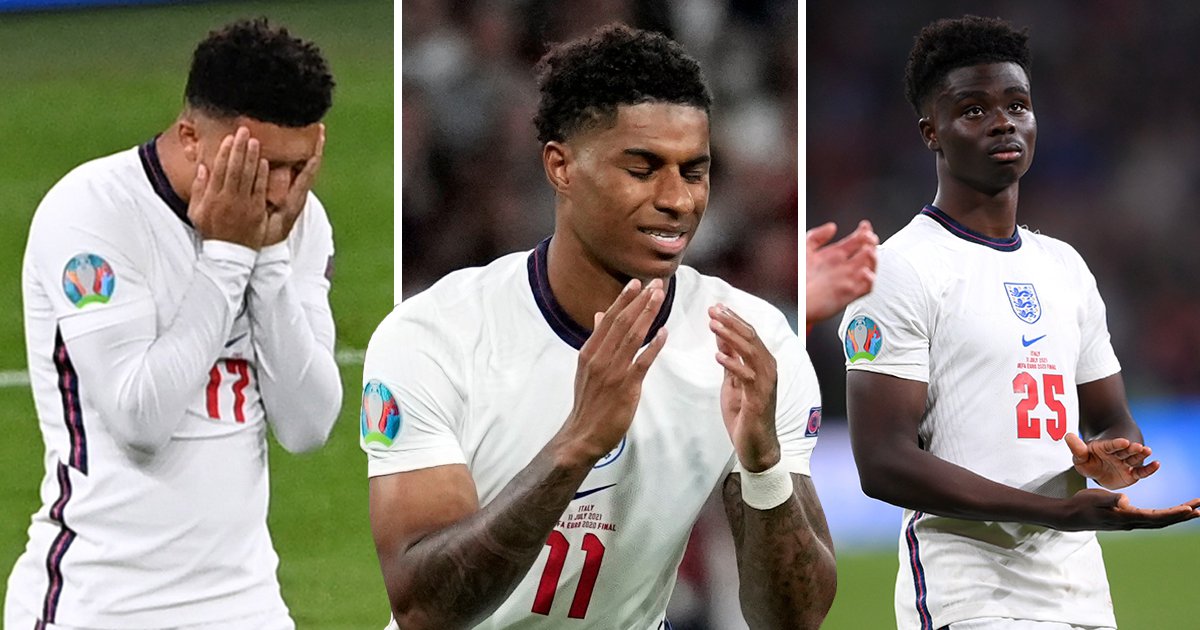 England players have been bombarded with despicable racist abuse after the Three Lions lost to Italy in the Euro 2020 final.

Marcus Rashford, Jadon Sancho and Bukayo Saka were flooded with abhorrent slurs and monkey and banana emojis on social media after missing penalties.

The Metropolitan Police has launched an investigation, warning the ‘unacceptable’ behaviour ‘will not be tolerated’.

A furious statement from The Football Association said any fan who partook in the ‘disgusting behaviour’ was ‘not welcome in following the team’.

It cautioned that ‘abuse has real life consequences’ and urged social media companies to gather evidence leading to prosecution.

A spokesperson said: ‘The FA strongly condemns all forms of discrimination and is appalled by the online racism that has been aimed at some of our England players on social media.

‘We could not be clearer that anyone behind such disgusting behaviour is not welcome in following the team.

‘We will do all we can to support the players affected while urging the toughest punishments possible for anyone responsible.

‘We will continue to do everything we can to stamp discrimination out of the game, but we implore government to act quickly and bring in the appropriate legislation so this abuse has real life consequences.

‘Social media companies need to step up and take accountability and action to ban abusers from their platforms, gather evidence that can lead to prosecution and support making their platforms free from this type of abhorrent abuse.’

It comes after England players stood against racism by taking the knee at the start of every single game – despite loud booing from crowds.

Boris Johnson has slammed those behind the racist comments, saying they ‘should be ashamed of themselves’.

Home Secretary Priti Patel – who has previously insisted fans have a right to boo players who take the knee – said she was ‘disgusted by the vile abuse’.

The official Twitter account for the England men’s and women’s national teams has thrown its support behind the players who have been victimised.

It said in a statement: ‘We’re disgusted that some of our squad – who have given everything for the shirt this summer – have been subjected to discriminatory abuse online after tonight’s game. We stand with our players.’

London Mayor Sadiq Khan called on social media companies to do more to punish those responsible for sending online abuse.

He wrote on Twitter: ‘There is absolutely no place for racism in football or anywhere else.’

Prince William, who watched the historic showdown at Wembley with Kate Middleton and a crushed-looking Prince George, has urged the defeated lads to ‘hold your heads high’.

Advising players to turn on Hidden Words, they added: ‘No one should have to experience racist abuse anywhere, and we don’t want it on Instagram.’