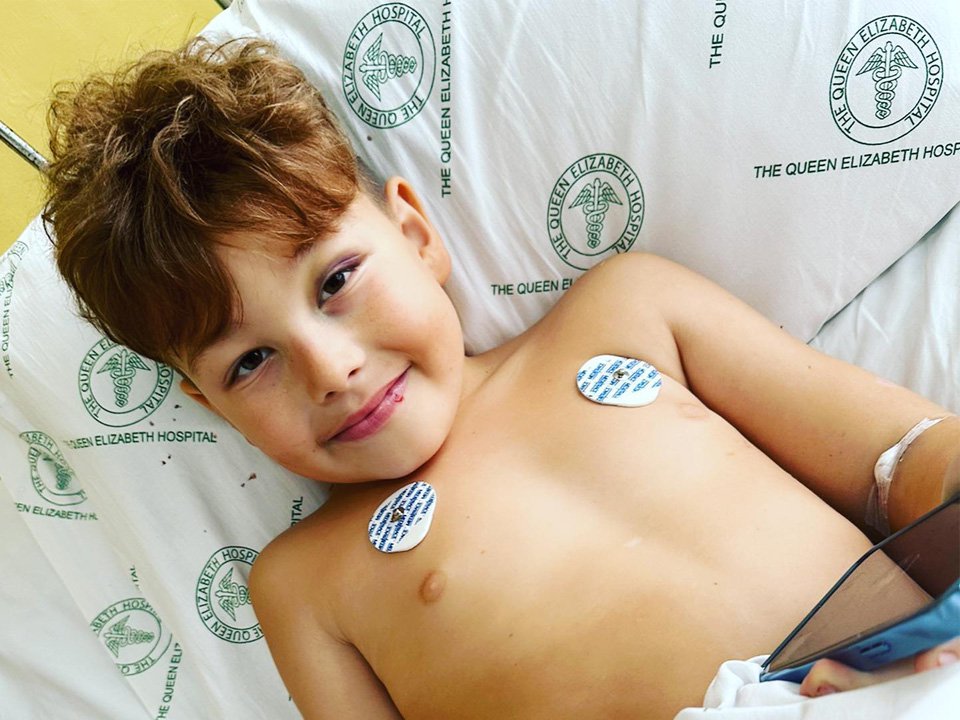 An eight-year-old boy who was left brain dead after falling ill on holiday with his family in Barbados has died.

Ace Rewtastle was rushed to hospital with suspected meningitis after developing a rash – but he was later given a devastating diagnosis of acute myeloid leukaemia.

The family, from Portsmouth, pulled together to raise funds to get him on a medical flight home last Friday – raising more than £100,000.

But on Sunday, Ace deteriorated and suffered a seizure, causing a catastrophic bleed on the brain.

He never regained consciousness and the next day, he was put into an induced coma and declared brain dead.

He tragically died on Saturday morning, his mum said.

‘There is no footprint too small to leave an imprint in this world.

‘Goodnight Acey Pops, today nature took its course, you are my whole existence and I will love and remember you until my last breath.

‘Give nanny Pat a big cuddle from me & let’s get you home my darling baby.’

‘I was so close to Ace. He was like a son to me. He was a loving, caring, cheeky little boy.’

Ace had flown out to the Caribbean island with his family on December 21 to spend Christmas in paradise – but he suddenly fell ill on January 3.

Amber and Ace’s dad, David, who is separated from Amber, both made the devastating decision to switch off his life support on Thursday after doctors told them their son had a zero per cent chance of recovering.

But hospital bosses in Barbados allegedly intervened at the last minute and stopped medics from switching off the ventilator.

His family said they were then left in a battle with the government in Barbados for the right to turn his life support off and bring his body home to the UK to be laid to rest.

The law in the Caribbean country states a life support machine can’t be turned off if there’s a heartbeat.

But Amber said ‘nature took its course’ and her son had died.

Joey said 14 family members flew out to say goodbye to the youngster last week – before government officials stepped in and stopped doctors from turning off his life support.

He claimed the army even turned up on Ace’s ward to stop anyone turning off his life support.

Amber’s mum had begged doctors to ‘let him rest’ as she had to sit by her son’s bedside while he was brain dead.

‘My poor boy, just eight-years-old, he didn’t even get the chance to fight this horrible cancer,’ she said.

‘Ace I am so sorry this happened to you and I would take your place in a heartbeat if I could.’

She added: ‘My poor baby is laid there brain dead, he doesn’t know he is here, he does not know that we are here and they are keeping his body alive to contract infections as the cancer makes his immune system so weak.

‘I cannot understand why they are doing this to us.

‘This is cruel and evil, sitting beside your child knowing they are dead and a ventilator is still making their heart beat.

‘I just want to get him home but this is proving impossible.’

The family now want to raise awareness of the law in Barbados to make sure other families don’t face the same heartbreaking situation.

A GoFundMe set up for Ace has raised nearly £112,000 – and Joey said the local community in Portsmouth have been ‘incredible’.

A Foreign Office spokesperson said: ‘We are providing support to the family of a British child who has died in Barbados and are in contact with the local authorities.

‘Our thoughts are with the family at this difficult time.’