The UK’s inflation rate fell sharply to a five-year low of 0.2% in August as the effect of the Eat Out to Help Out scheme pushed down restaurant prices.

The VAT cut in the hospitality sector from 20% to 5% was also a factor, said the Office for National Statistics.

Low inflation is good for consumers and borrowers, but can be bad for savers, as it affects the interest rates set by banks and other financial institutions.

The eating out scheme, which ran from Monday to Wednesday in August, offered 50% off food up to the value of £10. 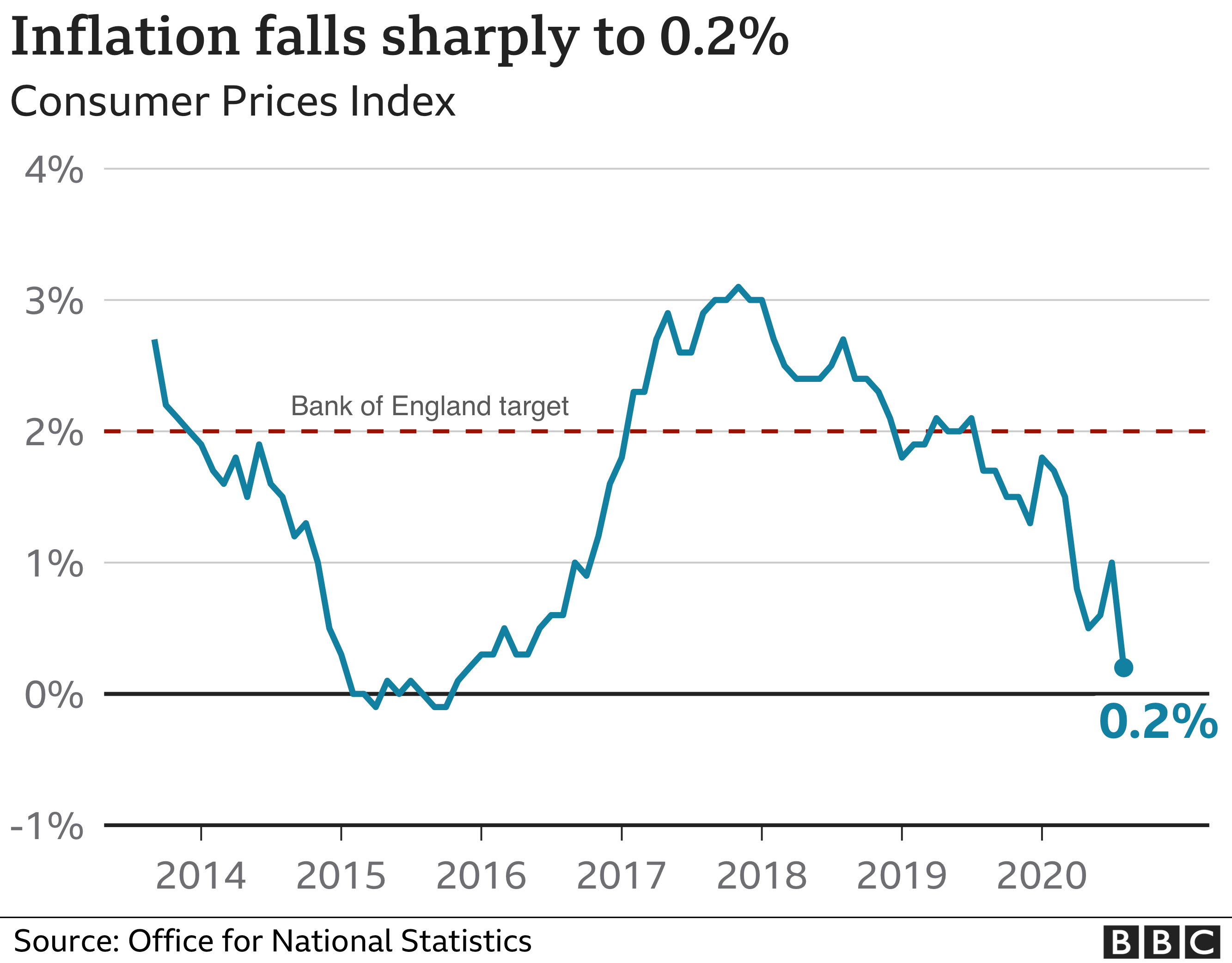 “The cost of dining out fell significantly in August thanks to the Eat Out to Help Out scheme and VAT cut, leading to one of the largest falls in the annual inflation rate in recent years,” said ONS deputy national statistician Jonathan Athow.

“For the first time since records began, air fares fell in August as fewer people travelled abroad on holiday. Meanwhile. the usual clothing price rises seen at this time of year, as autumn ranges hit the shops, also failed to materialise.”

It was the lowest inflation rate since December 2015.

Inflation is the rate at which the prices for goods and services increase.

It affects everything from mortgages to the cost of our shopping and the price of train tickets.

It’s one of the key measures of financial well-being, because it affects what consumers can buy for their money. If there is inflation, money doesn’t go as far.

Last month, discounts for more than 100 million meals were claimed through the Eat Out to Help Out scheme.

Prices in restaurants and cafes were 2.6% lower than in August last year, the first time they had been negative since records began in 1989, the ONS said.

Before the latest figures were published, there had been fears that the UK inflation rate might turn negative, giving rise to what is known as deflation.

Economists fear deflation because falling prices lead to lower consumer spending, as shoppers put off big purchases in the expectation that they will get cheaper still.

Thomas Pugh, UK economist at Capital Economics, said August’s figure was probably “the low point” for inflation, but pointed out that it was unlikely to hit the Bank of England’s 2% target within the next few years.

“The big picture is that it will be a few years before the economy is strong enough to sustain CPI inflation at the 2% target,” he said.

“The big risk to this view is a no-deal Brexit, which could cause a slump in the pound and, in turn, a temporary sharp rise in inflation to above 3.5%.”

Inflation is calculated by looking at a “basket” of commonly purchased goods and comparing how much they cost now to last month and to the same time last year.

During the pandemic, the ONS has been unable to identify prices for many of the 720 items it usually monitors.