E.U.’s New Digital Czar: ‘Most Powerful Regulator of Big Tech on the Planet’

BRUSSELS — For five years, Margrethe Vestager, was the scourge of Silicon Valley, levying billions of dollars in fines and initiating investigations against Google, Apple and Facebook for violating antitrust laws and harming consumers.

As the European Union’s competition commissioner, she, and her army of lawyers, became heroes to many critics of Big Tech, even as they were loathed in some corporate offices, and in the White House.

“She hates the United States,” President Trump said, “perhaps worse than any person I’ve ever met.”

On Tuesday, Ms. Vestager assumed more power than ever, expanding her portfolio to become the equivalent of the European Union’s digital czar.

It’s a job that analysts say will give her unmatched regulatory reach at a time when public anger is rising over issues like privacy, disinformation, data management and the enormous reach of the largest technology companies — like Google, Apple, Amazon and Facebook — into the everyday lives of billions of people.

“Margrethe Vestager will be the most powerful regulator of Big Tech on the planet,” said Thomas Vinje, a veteran antitrust lawyer based in Brussels. “She will have more leverage than anyone else in the world.”

Ms. Vestager’s enhanced status reflects the European Union’s ambition to become the most activist tech regulator in the world, creating a far-reaching role for itself in the global economy. European officials see an opening to become the trusted global regulator, especially as their American counterparts have been criticized for doing too little.

As the digital giants branch out into new areas, including finance with Facebook’s proposed Libra cryptocurrency, regulators are finding it harder to keep up with the complex, highly sophisticated and opaque nature of the companies they’re meant to oversee, experts say.

Ms. Vestager’s new role, which combines digital regulation and antitrust enforcement, could be better suited to the new era of digital domination, according to supporters of more aggressive regulation. 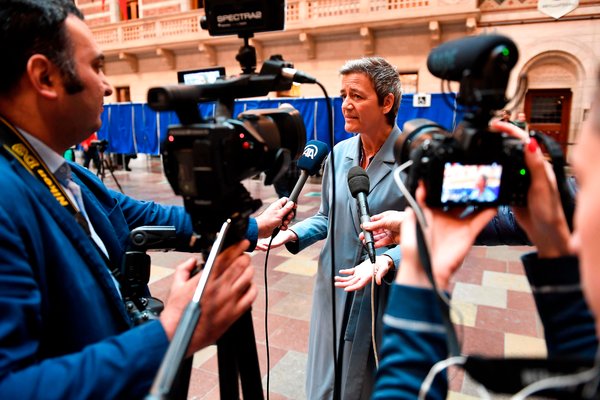 “Europe is clearly signaling that massive data harvesting must be considered a critical part of competition and regulatory analysis of market forces,” said Gene Kimmelman, the former chief counsel for policy in the antitrust division of the Justice Department during the Obama administration, referring to the huge amounts of personal information gathered by companies like Facebook. “It indicates Europe increasingly considers control of massive data likely plays a critical role in attaining dominance in digital markets.”

The unique characteristics of the digital world, including the inability for both consumers and regulators to see the algorithms that determine what users see in search results and news feeds, and what advertisers pay to reach them, make righting any potential wrongs in the industry even harder, Mr. Kimmelman, who now works for consumer-rights nonprofit Public Knowledge, said.

Ms. Vestager’s dual role as both a setter and enforcer of European Union rules could raise concerns about conflicts of interest and investing too much power in one office’s hands.

As part of her antitrust portfolio, she will be responsible for assessing if companies are using their market share to unfairly block out smaller competitors. And from her new perch as digital regulator, she can advance new rules on company behavior, including how they collect, use and store users’ data; and how they shield themselves against cyberattacks.

“Concentration of power is an issue,” said Mr. Vinje, the antitrust lawyer. “There is an efficiency benefit in having those powers combined in one person, but on the other hand there is always a benefit in debate and division of power, so one can question if this results in too much power.”

In her regulatory role, Ms. Vestager will be able to propose new legislation, but any law will need to be approved by European Union member states and the European Parliament, meaning her powers will be closely checked.

Ms. Vestager will also continue to oversee ongoing investigations, including whether Amazon is unfairly using data from third-party sellers who use its platform to improve its own offerings. Her office has also faced pressure to investigate if Apple is unfairly using its app store to harm competition, and to initiate further inquiry of Google.

In 2017, her office levied a record $2.7 billion fine on Google for unfairly favoring its own online shopping-comparison service over those of competitors. Last year, the E.U. ordered Google to pay an additional $5.1 billion for abusing its power in the mobile phone market to cement the dominance of its software on the Android platform. This year, antitrust authorities fined Google another $1.7 billion, this time for abusing its dominance in online advertising.

Her office has also ordered that Apple pay $14.5 billion in back taxes to Ireland and fined Facebook $122 million for combining the personal data of Facebook and WhatsApp users, after the company had explicitly said that it would not do so.

Ms. Vestager might broaden the scope of antitrust law to include how digital giants use data to gain an advantage over rivals. Academics, lawyers and competitors have argued that existing competition policies must evolve to better account for the use of personal information by Google, Facebook and Amazon to keep smaller rivals from emerging.

Not everyone thinks more regulation of the tech world is a good idea.

“Ms. Vestager is at the vanguard of tougher tech industry regulation on both sides of the Atlantic,” said Joe Kennedy, a senior fellow at the Information Technology and Innovation Foundation, a think tank in Washington that has received funding from tech companies. “The strong danger now is that we’ll have overregulation, rather than under-regulation.”

Apart from the Silicon Valley giants, Ms. Vestager will oversee the technically difficult and politically controversial rollout of 5G across the European Union, where the Chinese manufacturer Huawei remains a powerful player despite being banned from the United States. Her staff will also be at the forefront of scrutinizing cybersecurity efforts across the bloc and its half a billion citizens.

Whether tech regulators in other parts of the world, notably the United States, will see the European approach as an example to follow remains uncertain.

“U.S. law and the courts are more conservative on antitrust,” Mr. Kimmelman said. He added: “We’ve had very little, almost no enforcement against the tech sector. Europe is in the leadership role.”

Still, American officials have recently started to follow Europe’s lead in some cases. The Justice Department and Federal Trade Commission are now probing the tech giants. And over the past week, a bipartisan group of state attorneys general announced investigations of Google and Facebook. Members of Congress have been calling for more oversight of the fast-growing and influential industry.

As for charges that she is out to get the United States and its digital champions, Ms. Vestager rejected the claim early on in her career, when she began her first investigation into Google in 2015.

“My kids or myself never consider for a minute that this is a U.S. company or a European company,” she told reporters. “The reason we use it is that Google has very good products.”