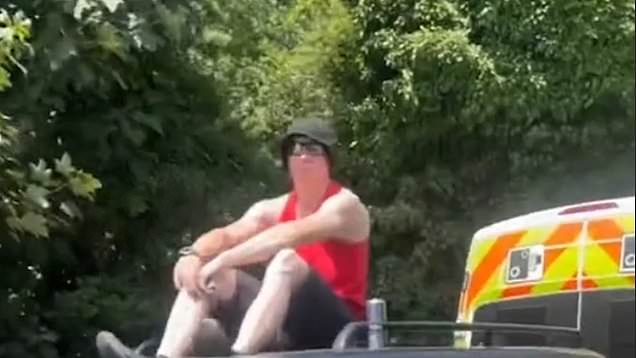 A bucket hat-wearing driver waved to passing cars from the top of his Nissan after parking directly in front of a speed camera van.

Roofer Dennis Richardson noticed the strange sight up ahead and got his phone out while sitting in the passenger seat.

He gave the chilled-out protester, sporting a red vest, shorts and sunglasses, a thumb’s up as he passed him in Maidstone, Kent.

The police van was barely a metre from the back of his grey car, which just so happened to be blocking drivers from getting speeding tickets.

Dennis said: ‘I was literally driving up the road with my son and he was there, parked in front of the speed camera so we turned back and had to film it.

‘God knows how long he was there. I laughed, I thought, “that’s brilliant.”

‘I’ve heard about people parking their cars, vans and lorries in front of them, but he was just sitting on the roof quite happy waving at everybody as they passed.’

Despite getting in their way, Kent Police said ‘no criminal offences were identified and no further action was necessary’.

A spokesperson confirmed the driver was spoken to and moved on after the police van was ‘briefly blocked’.

Anyone planning on doing the same stunt should think again as just last year, pensioner Jack Cureton became the first person in Britain to be prosecuted for obstructing a speed camera.

The 63-year-old mobility scooter user claimed the vans were illegally obstructing his access to pavements.

He was fined £400 after using his walking sticks to block the mobile speed cameras on 12 occasions.