LONDON — When Prime Minister Boris Johnson of Britain welcomes world leaders to the Cornwall seacoast for a summit meeting on Friday, he clearly hopes the soaring vistas — majestic cliffs rising above churning ocean surf — will impel the leaders into soaring new flights of global cooperation.

But on the eve of the Group of 7 gathering, Mr. Johnson is fighting a nasty, rather more earthbound battle at home over his pandemic-driven decision to cut Britain’s spending on foreign aid by a third, or more than $4 billion, a year.

Critics say the budget cuts make hollow Mr. Johnson’s ambitious plans for a worldwide effort to tackle climate change and the coronavirus, which are part of his grander effort to fashion a post-Brexit identity for his country as “Global Britain.”

The cuts are eviscerating aid to groups like the United Nations Population Fund, which says its flagship program on family planning for women and girls will lose 85 percent of its funding, or $253 million, from Britain this year. The program’s executive director, Natalia Kanem, describes the cuts as “devastating.”

Such anguished reports are sharply at odds with the headline-grabbing goals Mr. Johnson has set for the summit. He will call on leaders to commit to vaccinating every single person in the world against the coronavirus by the end of 2022. And he plans to roll out a vast initiative to reduce carbon emissions in developing countries, modeled on the post-World War II Marshall Plan led by the United States. 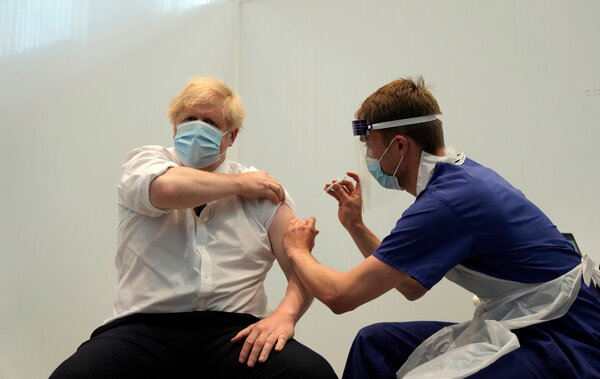 Mr. Johnson faces a mutiny from the ranks of his own Conservative Party. On Monday, he narrowly avoided what could have been a humiliating defeat in Parliament, when the speaker of the House of Commons, Lindsay Hoyle, ruled out a vote on an amendment that would have forced the government to restore the spending. The rebel lawmakers said they would look for other ways to force the issue.

The government first announced last fall that it would cut foreign assistance to 0.5 percent of Britain’s gross national income, from the legally mandated level of 0.7 percent, because of its emergency spending to cushion the blow from the pandemic. Britain will return aid spending to 0.7 percent “when the fiscal situation allows,” the chancellor of the Exchequer, Rishi Sunak, said.

The decision brought a storm of protest from former prime ministers, diplomats and aid workers who say the cutbacks subvert Britain’s attempt to stake out a new role on the global stage. Brexiteers argue that a Britain unshackled from the European Union can act as an agile, open-minded player abroad — a concept they dub, more in the language of marketing than statecraft, Global Britain.

Until now, Britain’s commitment to foreign assistance has been a visible part of that playbook. Since 2015, when it enshrined in law the United Nations target for aid spending by developed countries, it has been viewed as a leader. Britain still spends far more than the United States as a percentage of its economy, though the United States is the largest spender in absolute terms.

Critics say Mr. Johnson is motived as much by domestic politics as fiscal worries. Spending money on foreign aid is viewed as unpopular in struggling areas of the Midlands and northern England, where the Conservative Party has used economic appeals to make inroads in longtime Labour Party strongholds.

Mr. Johnson has promised to “level up” these less prosperous regions with London and the south. Redirecting funds from development projects in Africa and Asia to bridges and roads in the north of England is one way to do that.

“I dislike financial targets,” said Tom Tugendhat, a Conservative member of Parliament and chairman of the Foreign Affairs Committee, who has said he will vote against the government. “But undercutting our influence and selling Britain short by leaving the field open to our rivals is a mistake.”

“It may play well in some polls in Britain, but it plays best of all in Beijing,” said Mr. Tugendhat, who chairs the China Research Group, which has played a role in stiffening Britain’s policy toward China on technology and other issues. China, he points out, hands out money strategically all over the developing world.

Part of the problem for the government is that the fallout from the cutbacks has coincided with the Group of 7 summit, where Britain is eager to showcase its role as a leader and convener of countries. Some of the groups most heavily affected by the cuts are active in issues that Britain is highlighting in Cornwall.

Britain, for example, has contributed 15 million pounds, or $21 million, a year to UNAIDS, the United Nations program on H.I.V. and AIDS, for the last five years. Now it plans to cut that by 80 percent, to 2.5 million pounds, or $3.5 million, even as Mr. Johnson has made the pandemic and health security a centerpiece of the summit meeting.

“The decision was controversial to begin with,” said Simon Fraser, a former top civil servant at the Foreign and Commonwealth Office, speaking of the broader budget cuts. “What is more controversial is how it has been implemented. The real-life consequences of it are just coming to the fore, and the timing is terrible for the government.”

Government officials insist they will revisit the budget cuts next year. But Mr. Fraser and others predict the Treasury will balk at reversing them quickly, given the continued heavy spending on pandemic relief. The government is still subsidizing wages for tens of thousands of people who lost their jobs.

Officials point out that Britain took the lead in setting up initiatives like Covax, which aims to provide equal access to Covid vaccines. AstraZeneca, the Cambridge-based drugmaker that manufactures a vaccine developed by the University of Oxford, was the first to join Covax and provides the bulk of its supply.

Critics hope President Biden will press Mr. Johnson to restore Britain’s aid spending, even if the American record on aid is itself mixed. A group of Democrats in the House of Representatives, led by Representative Joaquin Castro of Texas, sent Mr. Biden a letter Sunday, appealing to him to raise the issue with Mr. Johnson when the two meet in Cornwall on Thursday.

“It is absolutely essential that Biden looks Boris in the eye and says, ‘We need you to come back,’” Mr. Drummond said.