The former Brexit Secretary insisted it is still achievable to change the Brexit deal but warned it will need some goodwill from the European Union. Speaking to BBC’s Andrew Marr, Mr Raab said: “There is clearly a reasonable ask that we can make, one that had the approval of the House of Commons around the so-called Brady amendment, in particular, making sure we have got an exit from the backstop.

I was doing my job in terms of pressing them hard

“And I think we need to go out and be absolutely resolute in a way we weren’t last time. I have got the experience, not only a conviction Brexiteer, as a lawyer, having worked six years in the Foreign Office, I am used to these negotiations and I have seen it first-hand.

“I think that it is achievable. But, of course, you are right. It will need some goodwill on the other side too.”

But Marr responded and pointed out the EU “don’t like you very much”.

The former Brexit Secretary chucked and said: “That probably tells you I was doing my job in terms of pressing them hard and making sure that Britain’s interests were resolutely defended.”

Mr Raab insisted the EU will renegotiate, warning Britain was “not resolute enough” and took no deal off the table. 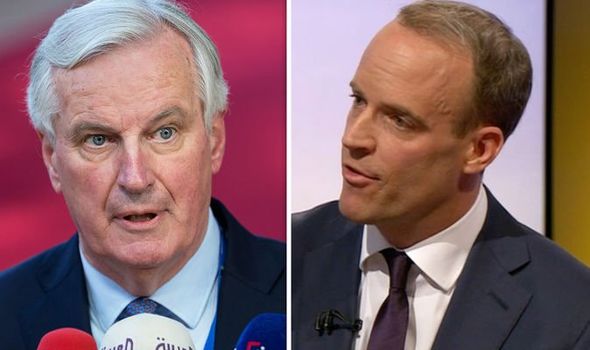 He added: “I don’t want a no deal Brexit but unless you are willing to keep our promises as politicians.

“And we, I think, are going to see what happens if you don’t in the European election results later. If we don’t and we are not willing to say that then I think we are putting ourselves in a much weaker position in terms of getting a deal.”

Mr Raab said he was “undermined” as Brexit Secretary from members of Remainers in Cabinet.

He has now called for a well-organised Number 10 operation and a united Cabinet under his leadership in order to break the ongoing Brexit deadlock.

The Tory MP for Esher and Walton added: “I think if you do that and then you can be really credible in Brussels that actually we mean business and we want a good deal, we want these limited changes, but we are willing to walk away otherwise.

“I think that will focus minds in a way that wasn’t done before.”

Mr Raab also said soaring support for Nigel Farage’s Brexit Party is a “stark reminder” the Conservative Party must deliver on the result of the 2016 Brexit referendum.

Among the other contenders to replace Theresa May as Tory leader are Boris Johnson, Andrea Leadsom, Rory Stewart, Esther McVey, Jeremy Hunt and Matt Hancock.

Speaking on Sky News on Sunday morning, former Work and Pensions Secretary Esther McVey warned that under her leadership the EU would face a choice between a new Brexit deal that delivers on the 2016 vote or leaving with no agreement on October 31.

The leading Brexiteer MP pledged to ramp up preparations for no deal after Theresa May repeatedly failed to get support for her controversial Brexit deal.

Speaking to Sky News’ Sophy Ridge on Sunday, the former Cabinet minister said: “What we have got to do straight away, actually, is start preparing and a lot of the preparations have been done.

“So, you are quite right – that date is now fixed. It’s not that I’d like to come out on that date, or I don’t want to, that date is fixed.

“We won’t be asking for any more extensions, that is part of the corrosive uncertainty that individuals, business and the country don’t want.

“So, that date is fixed. Of course, we have to say ‘we need to make sure that we are ready to leave on that date’.

“Now, if the EU wants to come back to us the door is open. If they want to have a better deal. That is fine.”

Ms McVey called for Britain to “not waste time” and instead make sure the nation is ready to leave with no deal on October 31.