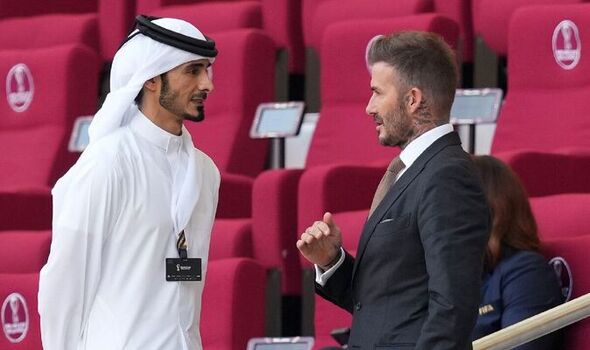 David Beckham has been seen cosying up to the Qatar sheikhs at the World Cup after a row over the England legend earning money from the host country.

The 47-year-old was criticised by LGBTQ fans for agreeing to be the face of the tournament, because homosexuality is illegal in the Arab country.

They said his status as a gay icon has been destroyed by him taking the pay cheque.

And comedian Joe Lycett even went as far as saying he was going to shred £10,000 if Becks refused to step down from the role.

But if he had stepped down then Mr Lycett said he would have donated the £10,000 to LGBTQ charities.

Following a video he filmed yesterday, this morning Mr Lycett admitted he did not actually shred any real money.

“In fact, the ten grand had already been donated to LGBTQ+ charities before I even pressed send on the initial Tweet last week. I never expected to hear from you. It was an empty threat designed to get people talking.”

Joe continued: “In many ways, it was like your deal with Qatar David, total bulls**t from the start. I’m not even queer, only joking.”

The comedian went on to say while he didn’t shred his hard-earned cash, he has found something else to shred, David’s Attitude magazine cover from June 2002.
Source: Read Full Article