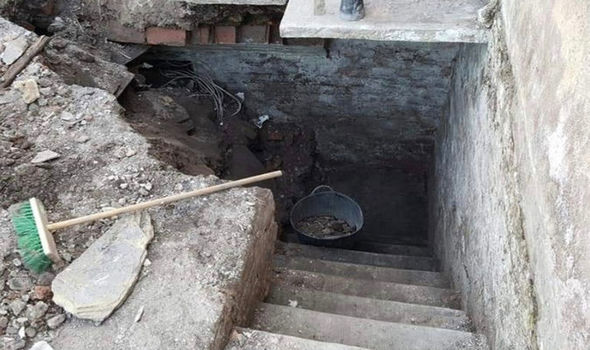 Sam, 34, who chose not to disclose his surname, had been carrying out work in his garden at his home in West Yorkshire when he realised one section was hollow not far beneath the surface.

Sam, who works as a plumber, said: “We originally found it in 2019 while I was digging up and levelling out the garden for a new lawn.

“My spade went straight through the ground into a void and my father-in-law came up to have a look and we discovered the old, barrelled roof and stone stairs.

“My father-in-law David suggested we keep digging – I didn’t really fancy it but I was so glad I listened to him.

“It took a few days for us to dig it out and carry all the soil and bricks out by hand.”

Sam says he thought it was an old cellar from an old house at first but has since had people contacting him to say it looks like an old bunker.

The bunker has undergone a £1,000 revamp and has now been fully excavated and converted into a toilet for his garden bar.

Sam continued: “I’ve got a nice, big garden and a man cave bar so it’s good for entertaining and this way, my friends don’t have to use the house.

“I built it using most of the materials we dug out so in total, it only cost around £1,000 to build but it was well worth it.”