Home » Europe » Criminal or Martyr? A Prisoner Poses a Political Dilemma For Spain

Criminal or Martyr? A Prisoner Poses a Political Dilemma For Spain

BARCELONA — Off a leafy boulevard in Barcelona sit the headquarters of Omnium Cultural, an organization known in Spain as much for its literary prizes as for its dreams of an independent republic in Catalonia.

But its president, Jordi Cuixart, is nowhere to be found: For the last three and a half years, he has lived in a prison cell.

To the Spanish authorities, Mr. Cuixart is a dangerous criminal, convicted of sedition for leading a rally at a time when he and other separatist leaders were seeking to set up a breakaway state in the northeastern region of Catalonia. Yet to his supporters, and in the eyes of many foreign countries, he is a political prisoner sitting in the heart of Europe.

“They want us to change our ideals,” Mr. Cuixart said, speaking through a thick pane of glass in the prison visitors’ section on a recent afternoon.

More than three years have passed since the Catalonian independence movement nearly tore Spain apart, and the politicians in Madrid have seemingly won. Plans for secession are largely dead. The sound of pots banging, which had been a fixture of the movement, is rarely heard at night now in Barcelona.

But Spain’s leaders, now consumed with battling the coronavirus pandemic, still have a political problem. To many, Mr. Cuixart and eight other men jailed for sedition are now martyrs who, according to human rights groups, are being held for nothing more than voicing and acting on their political views.

For the Spanish government — and for Europe as a whole — they have also become a diplomatic headache, raising accusations of hypocrisy against a region known for demanding greater democratic freedoms around the world.

Russia this year cited the Catalonian inmates to deflect calls from Europe for the release of Aleksei A. Navalny, the Russian opposition leader. The United States lists the prisoners in its human rights report on Spain and calls their jailing a form of political intimidation.

Even lawmakers in the European Union, which Spain is a member of, have raised their plight. When the bloc discussed holding Hungary and Poland accountable to E.U. rule-of-law standards, some European parliamentarians noted a double standard: Spain, they said, held political prisoners. 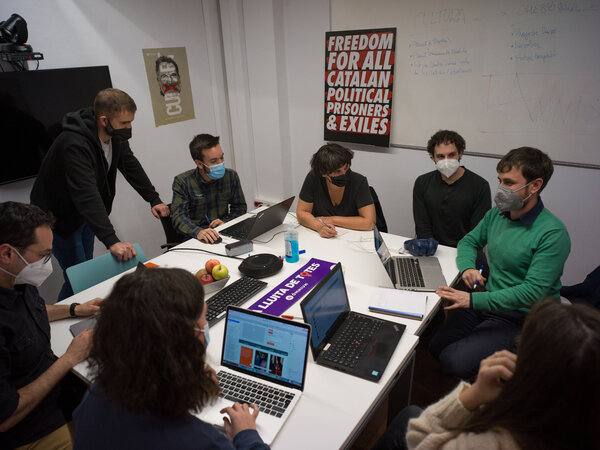 The jailings stem from a longstanding conflict, still unresolved, over identity, language and who has the right to rule in Catalonia, a region of 7.5 million people on the border with France.

In 2017, Catalonia was plunged into chaos when its leaders tried to hold a regional independence referendum in defiance of the Spanish courts. The national government in Madrid sent in riot squads, which seized ballot boxes and even beat some of the voters.

Separatists claimed victory anyway, despite the fact that more than half of voters did not cast ballots and polls showed that Catalonia was split on independence.

Defiant, the Parliament in Catalonia went ahead and declared independence anyway — only to suspend its own declaration before being dissolved by the Spanish government. By that time, Mr. Cuixart had already been arrested and other separatist leaders fled for Belgium.

In 2019, the courts sentenced Mr. Cuixart and eight others to between nine and 13 years in prison after convicting them of sedition.

“He is in jail simply for exercising his right to express himself,” Esteban Beltrán, who heads the Spanish office of Amnesty International, said of Mr. Cuixart.

Arancha González Laya, the Spanish foreign minister, said that this case brought painful memories in the country of other independence movements, including the killings by the terrorist group ETA, which fought for decades for the independence of the northern Basque region.

“They aren’t political prisoners. These are politicians that have broken the law,” Ms. González Laya said in an interview.

“The question is, do you have in Spain the ability to express a different opinion? Answer: Yes. Do you have the right to unilaterally decide that you break up the country? No,” she added.

But David Bondia, an international law professor in Barcelona, said that the Spanish government was considering an overhaul that would weaken its sedition laws, something he sees as an admission that there had been a mistake in jailing the separatist leaders.

Mr. Cuixart’s case was even more problematic from a legal view. He was the head of a cultural group, yet his sedition trial was conducted under a legal framework reserved for politicians, Mr. Bondia said, raising due-process questions.

For Carles Puigdemont, the former president of Catalonia who led the referendum push, the situation recalls the days of the Franco dictatorship, when political opponents lived in fear of persecution.

“For us, this has hit hard and brought us to the past,” he said.

Mr. Puigdemont, who is also wanted on sedition charges, fled Spain in 2017 for Belgium, where he serves in the European Parliament. But his parliamentary immunity was removed in March, allowing for him to be extradited.

The shadow of Franco played a role in the early days of Omnium, the cultural organization that Mr. Cuixart would go on to lead.

It was founded in 1961 by a group of businessmen to promote the Catalan language at a time when the Spanish government forbade its use in public. Shortly after, Francoists closed Omnium and the group went underground.

When Mr. Cuixart was growing up on the outskirts of Barcelona in the 1980s, Franco had died and many vestiges of his regime had long been swept away. But Mr. Cuixart still saw an intolerance toward his culture.

There was Mr. Cuixart’s name, for one. His first name, Jordi, was the Catalan name of the region’s patron saint, St. George the dragon slayer. But in official documents, Mr. Cuixart was registered with the Spanish name Jorge, a common practice in the country, which had forbidden registering Catalan first names.

“They saw difference as a threat,” he said.

Mr. Cuixart was swept into the world of Catalan letters by an uncle who owned a bookstore that was soon known for its literary salons filled with poets and political figures. The atmosphere was “a creative hurricane,” Mr. Cuixart said that would inspire him for decades.

As a young man, Mr. Cuixart plunged into the world of business, first working in Barcelona factories, then saving to open one of his own. After his profile as an entrepreneur began to rise, he joined Omnium in 1996.

The group had grown since its clandestine days into a key force in Catalan culture. It revived the Night of St. Llúcia, an after-dark literary festival in Barcelona that had been banned by Franco, and gave out the St. Jordi Prize for the best novel written in Catalan.

Omnium also reawakened the nationalist feelings that Mr. Cuixart had felt as a teenager.

“Being Catalan was more than a language and a bloodline,” he said. “It was a decision to live here and to be here. This is what made you Catalan.”

In 2010, Spain’s courts threw out a charter that granted broad powers for self-government, four years after it had been approved by voters and the regional Parliament. The move brought widespread anger and separatist flags became common in the countryside.

Soon, Parliament was discussing a move to declare an independent state, long considered a pipe dream of radicals.

Mr. Cuixart, who by 2015 had become the president of Omnium, was sometimes conflicted that his group had also joined the independence push — it was a cultural organization after all, not a political one. But in the end, he said that not joining would have been standing on the wrong side of history.

The crucial day came for Mr. Cuixart on Sept. 20, 2017, when the Spanish police, trying to stop the independence referendum from taking place, had stormed a Catalan regional ministry building on suspicions that plans for the vote were being organized there. But a giant crowd surrounded the location.

Mr. Cuixart and a pro-independence leader, Jordi Sánchez, tried to mediate between the protesters and the police. They set up pathways through the crowd for officers to enter the building and made announcements that anyone considering violence was a “traitor.”

The vote was held amid the crackdown the next month. But Mr. Cuixart recalled an earlier act of civil disobedience when there were no consequences after he dodged a military draft as a young man. He thought he had little to fear this time around.

But then the charges came: sedition, one of the highest crimes in Spain. Such draconian charges for activity at a protest surprised even legal experts who said that the sedition laws — which cover crimes less serious than full-out rebellion — had been rarely used in a country.

“I had to look up what ‘sedition’ even was,” Mr. Cuixart said.

Mr. Cuixart now spends his days at the Lledoners prison, a penitentiary built for about 1,000 inmates, and home to convicted drug peddlers and murderers. He said he spends his afternoons meditating and writing letters.

Jordi Cañas, a Spanish member of the European Parliament who is against Catalan independence, said he felt little pity for Mr. Cuixart’s situation because the separatists brought it on themselves.

“I don’t forgive them because they’ve broken our society,” Mr. Cañas said, adding that the independence push still divided Spanish homes. “I have friends I no longer speak to over this.”

Mr. Cuixart, for his part, said he was not asking for forgiveness. He would do it all over again, he said. It was Spain that needed to change, he said, not him.

“At some point, Spain is going to have to reflect and ask themselves, ‘What are they going to do with me?’” he said. “Eliminate me? They can’t.”