It is a momentous day for families across England as care homes reopen, allowing residents to entertain visitors for the first time in months.

Sky News reporters have met up with two families for whom the enforced separation of the COVID-19 pandemic has felt like, as one of them described, “a prison sentence”.

Linda Gawley and her father, Jim

Linda Gawley’s knuckles turned white because she was gripping her father Jim’s hand so hard.

Even with her mask on, an irrepressible smile shone through. “Not being able to touch somebody is really hard.”

The death of Linda’s mother, Jim’s wife, during the pandemic made the lack of contact even harder.

The urge to hug her father this morning was so strong that Linda’s arms instinctively shot out to embrace him before she remembered the rules and quickly retracted them, with visible disappointment.

“It would be nice to hug but we’ll get to that. It’s a step in the right direction today,” she said.

With their hands still clasped together, Jim’s voice cracked as he described how tough the last 12 months have been.

“You feel as if you’re a prisoner really,” he said.

“A lot of people stay in their room.”

The 88-year-old has become the care home’s resident DJ to lift people’s spirits in lockdown.

The music from Riverdance has become the Irishman’s signature tune but it’s clear nothing compares to holding his daughter’s hand once again.

“I never thought it’d happen,” he said, as tears filled his eyes, and his voice cracked with emotion.

“You think this is it, for the rest of my life. But I can see light at the end of the tunnel now. It’s a wonderful feeling.” 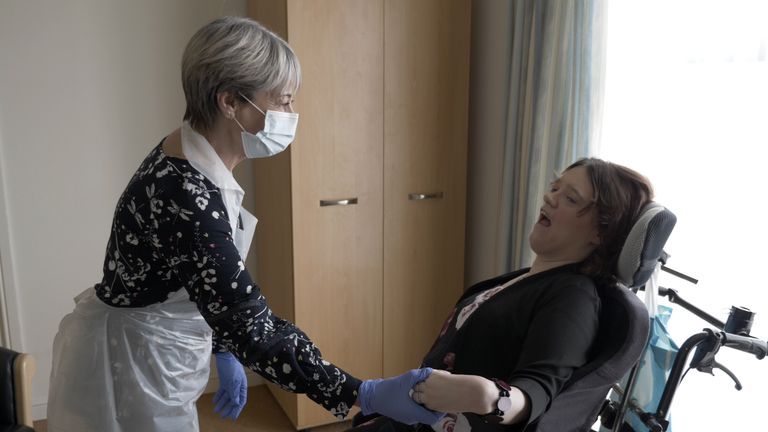 Sandra and her daughter, Kayleigh

There have been many extraordinary moments in the last 12 months, but very little comes close to watching 31-year-old Kayleigh hold her mother’s hand in her care home for the first time in over a year.

“It is amazing,” she tells me, giggling. “We took it all for granted!”

Kayleigh has severe cerebral palsy, she is a resident at Claro Road care home for young people with physical disabilities in Harrogate, Yorkshire.

Her mother Sandra is the first indoor visitor allowed here since the summer.

“I’ve got tears in my eyes,” Sandra tells me stroking her daughters hand.

“I was more emotional than what I thought I was going to be when I came in here. Even though I’ve seen her through the window, it’s not the same.”

Sandra says outdoor window visits were one of the most difficult parts of the last year.

She says: “We have a difficult job trying to understand each other, and with the windows reflecting back we couldn’t see that well either. It was hard.”

Sandra has had to take a lateral flow test and wear a mask and gloves before coming inside. She says the care home have done a “brilliant” job looking after Kayleigh, but the last year has been challenging for her daughter.

Kayleigh says isolation has felt like being “in prison” at times and she misses her day trips.

Sandra usually takes her daughter out for the day once a week, she says.

“We go shopping, we go to the hairdressers and things like that. A friend sometimes comes with us. It’s been really hard not having that,” she said.

Though mitigated as best they can be, care home visits don’t come without risks.

But as the country slowly unlocks there is no question here that it was right for visits to be one of the very first freedoms restored.

As I leave Kayleigh tells me “It’s the light at the end of the tunnel!”

It is hard not to feel hopeful that from now on the future will be brighter at Claro Road.