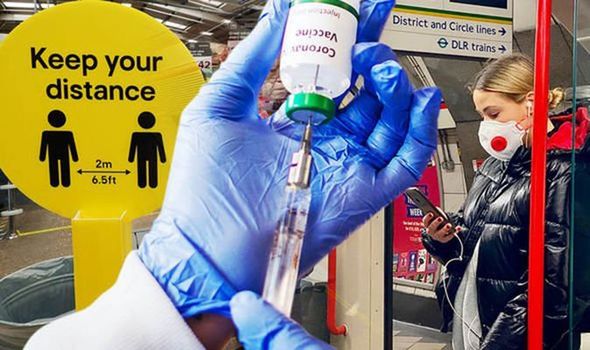 Director-general of the Confederation of British Industry (CBI) Dame Carolyn Fairbairn said: “It’s an incredibly difficult time for business – this is a real body blow. So many firms have worked very hard to become COVID-safe, they have been resilient through the first phase. “We need to do everything we can to minimise the damage of this second lockdown. We need to use the next four weeks to really prepare for what might come next, and mass rapid testing for businesses could be a total game-changer, enabling more of our economy to be open and work safely and productively.”

The CBI, which is holding its annual conference today, urged the Government to consider looking at other testing systems used around the world.

CBI policy director Matthew Fell said: “The benefits of ramping up mass testing have never been clearer. More reliable, rapid mass testing could transform the way we live and work and holds the key to reopening our economy.

“The Government’s Moonshot ambitions are right, but to deliver them we need to look closely at international best practice to ensure we consider as wide a range of testing options as possible.

“We cannot allow the perfect to be the enemy of the good if we want to build confidence and protect jobs and livelihoods now.”

Mr Johnson revealed on Saturday that “rapid turnaround tests” for coronavirus will be rolled out in “a matter of days”.

The Army is being drafted in to help distribute the swabs, which will be used to help in certain situations, such as letting pregnant women have their spouses or boyfriends with them when they go into labour.

Eventually they will be used for “testing whole towns and even whole cities”, according to the PM. Initially the Government had pledged that there would be a capacity of 500,000 tests per day by the end of October.

Mr Johnson is working towards a system of mass testing under his so-called Operation Moonshot to make millions of tests available.

Businesses have been left reeling after the second national lockdown hit their tentative recovery from the first shutdown. Chancellor Rishi Sunak announced the furlough scheme, which closed at the end of October, will be reopened.

He said: “The Government must use the time afforded to them through another lockdown to enable mass testing and fix Test and Trace systems, which hold the key to a lasting exit strategy for public health and the economy.

Jonathan Geldart, the director general of the Institute of Directors, said the restrictions would inflict “great strain on an already fragile business community” – but that the extension of the furlough scheme would be a relief to many firms.

He added: “When we emerge from these restrictions, directors will want to see the Test and Trace system firing on all cylinders.

“This could be a key weapon in the fight against the virus, but it hasn’t hit its target yet.

“The Prime Minister’s emphasis on this is welcome, but the results on the ground will matter most.”

“My own personal estimate is that for every day it carries on, you can say it is between two and three weeks’ recovery time.

“So, if it goes on for a month, that’s possibly a year’s recovery time.”

It will cause untold damage to the high street, cost countless jobs, and permanently set back the recovery of the wider economy, with only a minimal effect on the transmission of the virus.”

Emma McClarkin, the British Beer and Pub Association chief executive, fears it could be “the final straw for thousands of pubs and brewers”.

Ian Wright, the Food and Drink Federation chief executive, said: “The economic impacts of this decision threaten calamity unless we see further details of a rescue package in the next 72 hours.”

Derek Cribb, the chief executive of the Association of Independent Professionals and the Self-Employed, called on the Government to help freelancers, who are able to claim just 40 per cent of their earnings, compared with 80 percent for staff.

Business leaders also asked for the economic stimulus package from next April to include extending the business rates holiday and the hospitality VAT cut.