Home » Europe » Coronavirus: Airport testing could end ‘quarantine roulette’ for holidaymakers – but how would it work?

Coronavirus: Airport testing could end ‘quarantine roulette’ for holidaymakers – but how would it work?

Heathrow Airport wants to test passengers arriving from certain countries for coronavirus when they enter the UK, potentially allowing them to spend less time in quarantine if they test negative.

Airport bosses are calling on the government to approve the scheme, which would allow Britons returning to the UK from “at risk” countries to leave quarantine between five and eight days after they land – instead of the current 14.

COVID-19 tests could be booked online in advance and would cost passengers £150 each, but this could fall to £50 with a state subsidy, the Daily Mail reports.

Heathrow says it has a testing facility “ready to go” but needs government approval for passengers to be allowed out of quarantine early.

Health Secretary Matt Hancock says he “hopes the project can bear fruit”, but government scientists say Heathrow has to “do testing in a way that we can have confidence enough to release people from quarantine”.

Sky News looks at what is being proposed and how it could work.

How would testing work at Heathrow?

Airport bosses have created a testing facility at Heathrow’s Terminal 2 and hope to have another one ready at Terminal 5 “by the end of the month”.

Passengers returning from countries not on the UK government’s “safe list” would be able to book a coronavirus test for when their plane lands.

It would cost £150 per person, but if the scheme is successful and rolled out widely enough it could fall to £50 each with a state subsidy, according to the Daily Mail.

The swab PCR (polymerase chain reaction) test – identical to the ones used by the NHS – would be carried out by nurses at the airport, with results available within seven hours. 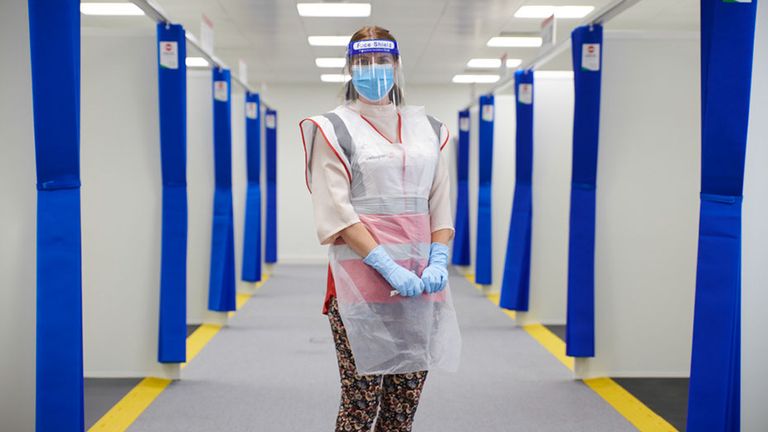 Returning travellers would then be expected to go home and quarantine as usual even if they get a negative result – as the Heathrow plans are based on a two-test system.

This means staying at home and not leaving to go to school or work, as well as asking other people to collect food or medical supplies for you.

Between five and eight days later, you would then be asked to complete a home-testing kit given to you at the airport. If that test is negative, you can safely end your quarantine.

David Evans, joint CEO of Collinson, one of the companies working on the Heathrow scheme, told Sky News: “Passengers will pre-book a test, working with their airlines, then once they arrive, they will come through our facility and nurses will do that test.

“It’s the PCR test, exactly the same as the NHS ones, which are very simple and very quick. Once that test has been done, they will be given another test to take home with them.

“A few days later they will do that test and post it back to us. We will put it through the labs and provided that test comes back negative, they’ll be free to go about their holiday or their business trip.”

This would also apply for UK citizens returning home from a holiday abroad. Is it working in other countries?

There are double-testing systems already in place across 30 countries, including the whole of Germany, Iceland and Austria, as well as individual airports such as Paris Charles de Gaulle, Dubai International and Tokyo Haneda.

Jersey is also operating the same scheme proposed for Heathrow, which bosses claim provides strong scientific evidence that it will work.

In July, 20,061 people arriving in Jersey were tested for COVID-19 at the border – 20% of the resident population – but only 17 of those people tested positive.

A Heathrow spokesman said: “Consistent with the findings of all other countries that have trialled and implemented testing on arrival, the testing was found to be highly effective at detecting coronavirus at the border and preventing onward transmission in the community.”

In Iceland since 19 August, people arriving in the country have had the option to reduce their quarantine period by undergoing double-testing.

Arriving passengers can choose to quarantine for 14 days as normal or they can opt to be tested at the airport and then again five days later.

In Iceland, returning travellers are swabbed at the airport and then told to go by car or taxi – not public transport – to their homes or accommodation.

They receive their first test results via an app or text message within 24 hours.

If the results are positive, they will have to stay in quarantine for the full 14 days.

But if the results are negative, they will receive another message on the evening of their fourth day telling them how to get a second test.

If that is negative, they can leave quarantine. Will there be queues?

People will have to queue to be swabbed at the airport, but bosses claim the tests are “quick and simple”.

The Heathrow testing centre can cater for 13,000 passengers a day, a spokesman said, but this could be scaled up if necessary.

But he said given the choice between two weeks in quarantine and “a few extra minutes to get this test”, passengers are expected to be understanding about wait times.

What does the science say?

Documents released on Friday from the last meeting of the government’s Scientific Advisory Group on Emergencies (SAGE) found that “double testing of travellers significantly reduces the risk of false negatives and could enable quarantine duration of less than 14 days”.

Analysis published by the Office for National Statistics (ONS) on Tuesday found that only around 28% of people testing positive for COVID-19 reported any evidence of symptoms at the time of their swab test, or at either the preceding or subsequent tests.

The remaining 72% of positive cases either did not report having any of the specific or general symptoms on the day of their positive swab test, preceding or subsequent swab tests, or did not answer both questions, the ONS added.

It said the findings suggested there was a “potentially large number” of asymptomatic cases.

This means there is a good chance double border testing would identify the majority of positive cases within eight days.

When will it be introduced?

Heathrow’s border testing facility is “ready to go” at Terminal 2, with a second one being built at Terminal 5 for the end of August, according to Heathrow CEO John Holland-Kaye.

Although the test centre, created with the help of companies Collinson and Swissport, is in place already, only the government can allow people to leave quarantine early.

Mr Holland-Kaye told Sky News: “The Department for Transport is very keen that this should happen, but it’s a cross-government decision.

“Number 10 should get a grip of our border policy to make sure our business gets going again.”

Health Secretary Matt Hancock said: “It is absolutely a project that we are working with Heathrow on.

“I clearly understand the impact of quarantine on so many people’s lives. It is not something anybody would want to do. So I hope that this project can bear fruit.”

The government has not revealed when such a decision could be made.

Why do we need airport testing?

With dozens of countries, including France and Spain – Britain’s top two holiday destinations – on the UK’s “at risk” list, passengers returning from those countries currently have to quarantine for 14 days after they land.

This means people are being put off travelling, business trips are being cancelled and UK exports are being adversely affected, Heathrow bosses say.

CEO Mr Holland-Kaye added: “This is holding back the recovery of the UK economy.

“After the UK leaves the European Union we need to be trading with places like the US, Canada and Singapore – all of which are quarantined at the moment.”

Last week, a Heathrow spokesman called on the government to end the “quarantine roulette” holidaymakers risk by travelling abroad by allowing double testing to be put in place.