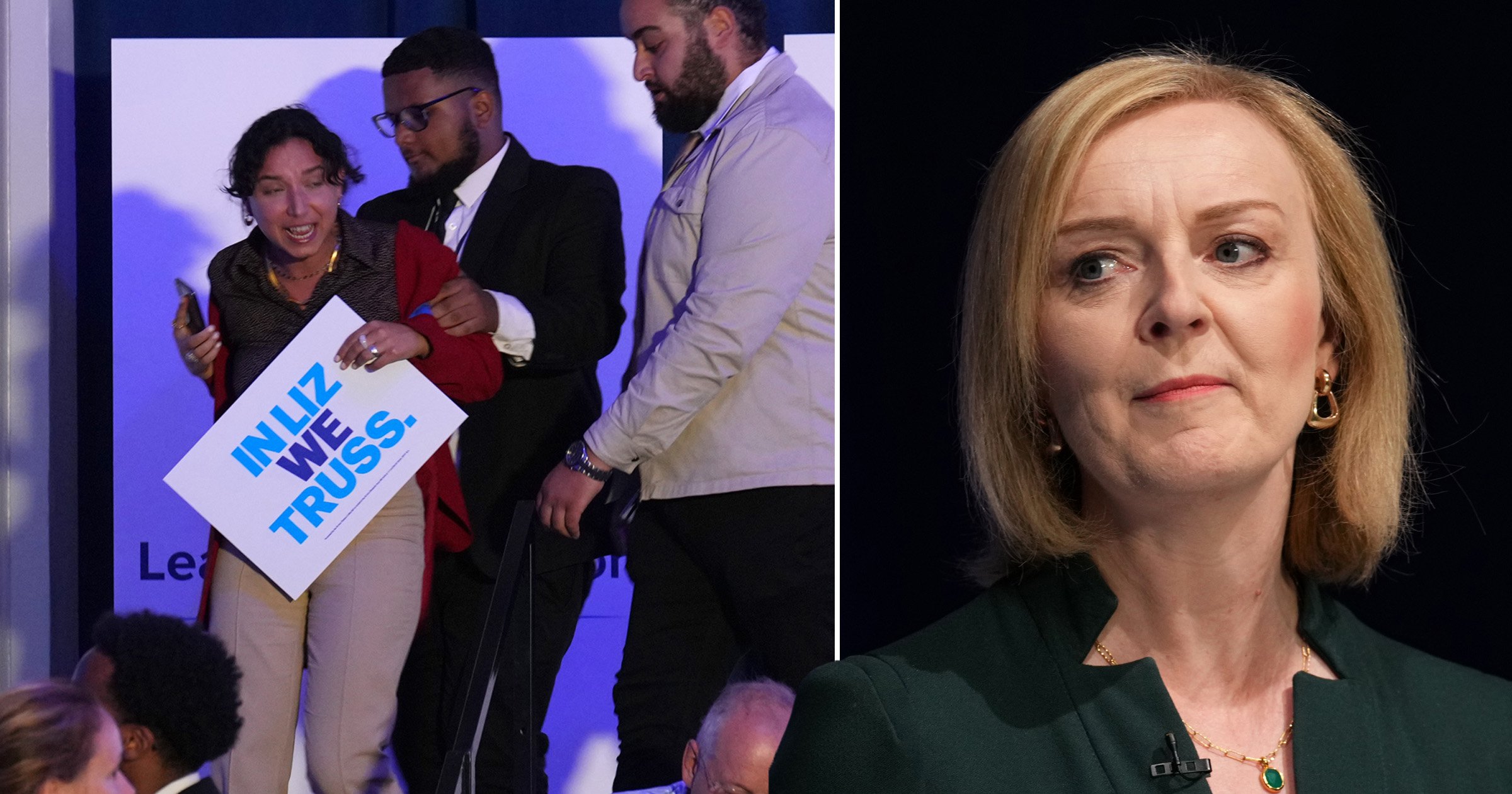 Liz Truss has vowed to clamp down on ‘unfair protests’ after a small group of climate activists disrupted her speech at a Tory leadership hustings.

The five protesters in Eastbourne, East Sussex, were believed to be from the Green New Deal Rising group.

They heckled Ms Truss over climate change and energy bills and could be heard shouting ‘shame on you’ and calling for a Green New Deal.

The Foreign Secretary described them as ‘infiltrators’, before vowing to clamp down on ‘militant trade unions’ and ‘unfair protests’.

As protesters were escorted by security out of the studio, a Conservative Party member in the crowd could be heard saying: ‘Go back to America, or wherever you came from.’

The protester says she is South American, to which the man replies: ‘Go back to your own country.’

‘I would legislate immediately to make sure that we are standing up to militant trade unions who stop ordinary commuters getting into work. And I would legislate to protect our essential services.’

She added: ‘And I will make sure that militant activists such as Extinction Rebellion are not able to disrupt ordinary people who work hard and do the right thing and go into work.

‘I will never ever, ever allow our democracy to be disrupted by unfair protests.’

The disruption came as Ms Truss was in the middle of delivering her opening speech at the fourth of 12 official Conservative leadership hustings.

Another protester was later escorted out as Ms Truss was in the middle of a question and answer session with Tory members.

She joked: ‘I take it as a compliment that I’m so popular with Extinction Rebellion.’

The Foreign Secretary’s bid to become prime minister got a major boost after Conservative former minister Nus Ghani came out in support of her campaign at the beginning of the debate.

Ms Truss was introduced by Ms Ghani, who told Tory members that because of her role as the vice-chairwoman of the 1922 Committee of backbench Conservative MPs, she had not been able to back a candidate until this stage of the race.

She said: ‘Liz is straightforward. When she tells you she’s going to do something, you can trust her that it will get done. Liz listens.

‘When colleagues come forward with ideas or problems to solve, she engages with them. She is inclusive.

‘I’ve been a minister and now a backbencher. And my experience with Liz Truss is that she is both fair and honest.”

She added: ‘It’s Liz that is going to bring us together.’

The former chancellor Rishi Sunak was instead introduced by Deputy Prime Minister and Justice Secretary Dominic Raab, who told members Mr Sunak is the best candidate to ‘beat Keir Starmer and to win the next election’.