Clashes and arrests as 'yellow vest' protests return in France 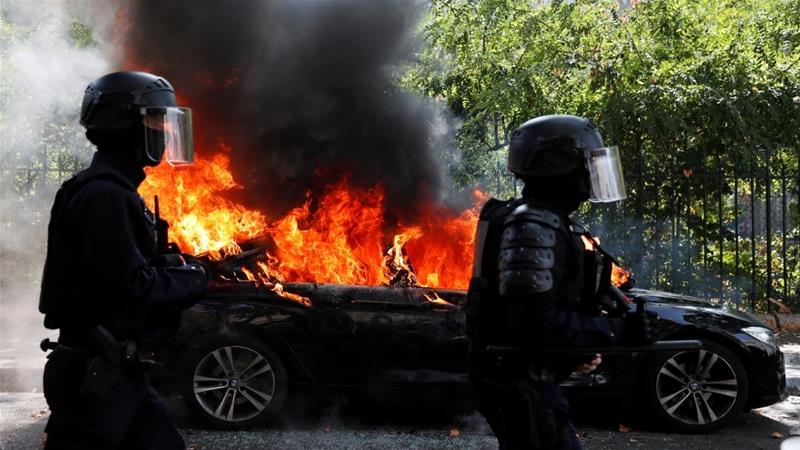 The French police fired tear gas and arrested more than 250 people in Paris as “yellow vest” protesters returned to the capital’s streets in force for the first time since the coronavirus lockdown.

The “yellow vest” movement, named after motorists’ high-visibility jackets, began in late 2018 in protest against fuel taxes and economic reform, posing a big challenge to President Emmanuel Macron as demonstrations spread across France.

On Saturday, hundreds of demonstrators gathered at the starting points of two authorised marches.

While one cortege set off without incident, the other march was held up as police clashed with groups who left the designated route and set fire to rubbish bins and a car.

Some of the protesters wore black clothes and carried the flag of an anti-fascist movement, suggesting the presence of radical demonstrators dubbed “black blocs” often blamed for violence at street marches in France.

The police arrested 256 people by 6pm (16:00 GMT), many of them for carrying items such as tools that could be used as weapons, including screwdrivers, ice axes and knives. 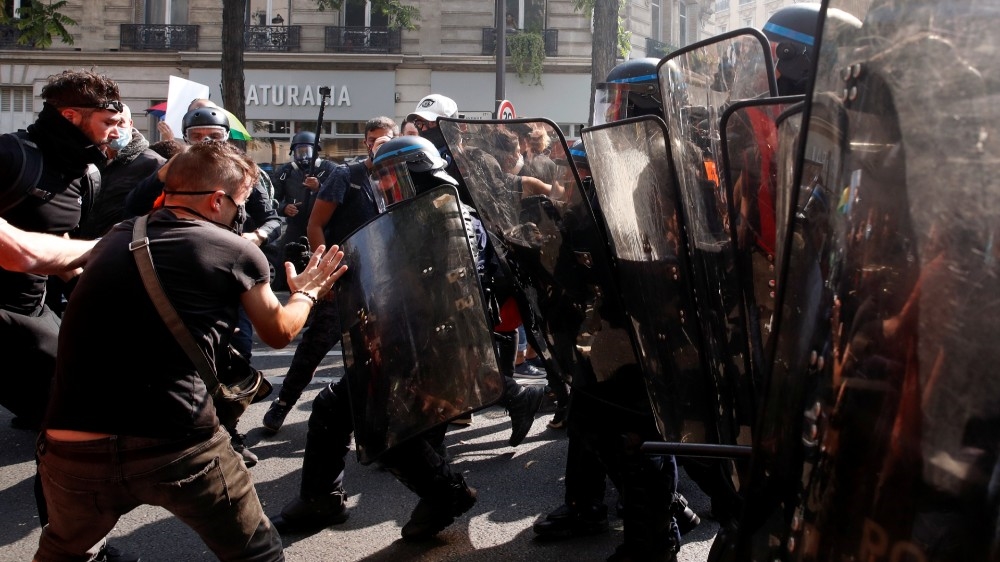 The return of the protest movement comes as France grapples with a resurgence in coronavirus cases.

The country’s daily cases of COVID-19 reached a record high of nearly 10,000 on Thursday.

A day later, French Prime Minister Jean Castex announced plans to speed up testing and toughen measures in certain cities as the government seeks to avoid a repeat of the nationwide lockdown earlier this year.

Police called on demonstrators to respect coronavirus measures in Paris, which is among France’s high-risk “red zones” and where it is compulsory to wear a face mask on the street.

On Friday, Interior Minister Gerald Darmanin announced slightly tougher rules on how police use controversial rubber-coated bullets and other crowd-control weapons before the marches.

Officers must now ask supervisors for permission to fire the projectiles, which have been responsible for injuries. Jerome Rodrigues emerged as a prominent leader after losing an eye to a police rubber bullet during a protest.

Commenting on the relatively low turnout on Saturday, Michael, a 43-year-old protester in the crowd at Place de Wagram, told AFP news agency, “The movement is dead, I’ll say that clearly, but we’re here because we have nothing to lose. This is a kind of last stand.”

Another protester, a 50-year-old civil servant who asked to remain anonymous, said “social and economic robbery” and “our fundamental freedoms increasingly [coming] under attack” drove him out onto the streets.

Pensioners Pascale and Patrick, who had travelled to Paris from Crolles in southeast France, said they were sure “the movement isn’t running out of steam”.

Veterans of demonstrations at traffic roundabouts in provincial towns, the pair said they “don’t want this world for our children and grandchildren, where we’re subjugated by this oligarchy”.

Elsewhere in France, several hundred “yellow vest” protesters gathered in the southwestern city Toulouse in defiance of a ban authorities said had been imposed over coronavirus infection risks.

Police tried to disperse the group with tear gas, a scene matched in Lyon, while people also gathered in Bordeaux and other towns.

“I didn’t back the yellow vests at first but things have only got worse for people in poverty. Nothing’s changed after two years of struggle,” a 53-year-old man calling himself Dodo said at the Toulouse protest.

Quick COVID test: When is the rapid testing kit coming to the UK?