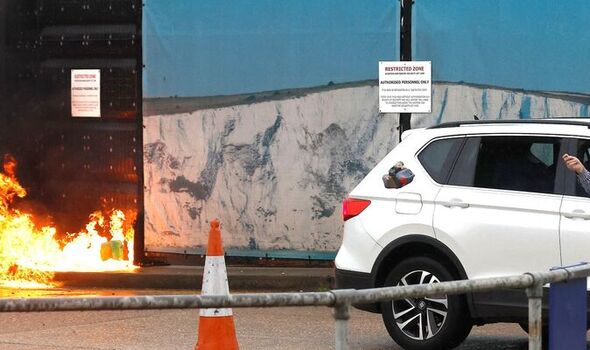 Chilling photos show the moment a centre for processing migrants in Dover was attacked with petrol bombs. The man reportedly threw three petrol bombs, one of which failed to explode.

Following the attack, the man, who was white and wearing a checked shirt, drove to a nearby petrol station and tied an improvised rope around his neck which he used to kill himself.

Kent Police said in a statement: “Officers established that two to three incendiary devices had been thrown into a Home Office immigration premises.

“One minor injury has been reported. The suspect has been identified and located. Enquiries into the incident remain ongoing.”

Video posted on social media showed staff attempting to extinguish a small fire on the exterior wall of the centre.

Britain has seen a steep rise in migrants crossing the English Channel. Some have criticised the Government for not doing enough to protect the country’s border while charities and human rights groups have said that asylum seekers are being treated inhumanely.

Nearly 1,000 migrants arrived in England after crossing the Channel on Saturday, according to Government figures.

That brings the number of migrants who have made the crossing this year to almost 40,000.

The journey crosses one of the world’s busiest shipping lanes and is extremely dangerous, at least 44 people attempting to cross died or went missing in 2021.

The Samaritans can be reached round the clock, 24 hours a day, 365 days a year.

If you need a response immediately, it’s best to call them on the phone. You can reach them by calling 116 123, by emailing [email protected] or by visiting www.samaritans.org.