BTec results day is now delayed, after exam board Pearson announced it was pulling results before their planned release tomorrow. Students will now have to endure a fresh round of chaos following last week’s A-level controversy. Approximately 575,000 children will end up affected, roughly 250,000 of whom received grades during last week’s debacle.

When will BTEC results be out?

They said in a statement: “BTec qualification results have been been generally consistent with teacher and learner expectations, but we have become concerned about unfairness in relation to what are now significantly higher outcomes for GCSE and A-levels.”

The board did not announce when it would ultimately release results, and many BTec students have said they feel forgotten. 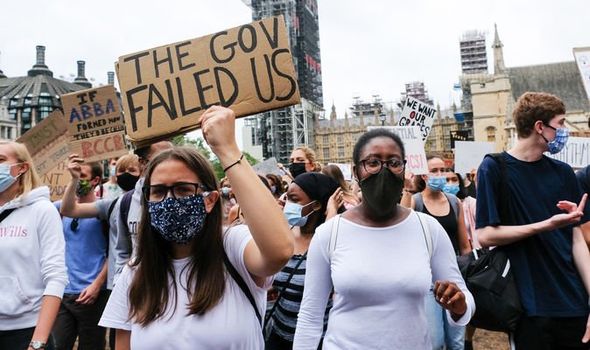 They were initially due results on the same day as A level students, but instead have heard nothing about their grades.

Pearson offered some reassurance to students by pledging to speak with universities on their behalf.

But beyond that the most they have heard is that they have been postponed once more.

Students who took the similar Cambridge Technicals – administered by the OCR board – have experienced the same problems.

Much like students who received their A-levels last week, those who studied for either qualifications have been profoundly affected by the experience.

Speaking to the BBC, BTec student Ellie Clarke – who has spent the past two years studying for her Health and Social Care BTec – said she felt failed by the board.

She said: “As students, we’re committed to completing our assignments on time, but our exam board couldn’t even commit to getting our results in on time.”

Miss Clarke added the waiting has affected her mental health.

She added: “I’ve cried a few times. I don’t know what to do or who to contact because there’s realistically nothing I can do.”

Her experience is far from unique, as other students across the country are also awaiting results – vital to a place at university or apprenticeship.

Faheem Khan, who is hoping to study Pharmacy at De Montfort or Wolverhampton University, said he was struggling with nerves.

He told the BBC: “On results day you know you’re going to be nervous for what you get, but because we haven’t had our results and it’s going on for four days now, those nerves rack up. It’s quite hard to deal with.”